The blogger Scary Mommy needs to change her name to a Scared Mommy that wets her panties over nothing.

One surprising fact about anti-gunners is how, despite having so many alleged comedians among their number, so many of them completely lack anything approaching a sense of humor. I’m not talking even about finding things funny, necessarily, but even lacking the ability to see how someone else might find something funny.

You see, Idaho Republican state Representative Priscilla Giddings shared a photograph of herself with some anti-gun activists. The caption she gave the photo, however, has some people worked up.

As a result, the mommy blog Scary Mommy is supporting the claim that Giddings made a threat.

Giddings’ caption on the photo sparked outrage from many on social media, some feeling that she was making fun of the protestors and others who felt it was a thinly veiled threat against the women.

On Saturday, even as Giddings’ comments were being blasted in the media, the Idaho Republican Party honored her at the convention for her military service, the Idaho State Journal reported. Giddings is a former active duty Air Force pilot, combat veteran, and a current member of the Idaho Air National Guard and Air Force Reserve.

Of course, they also included a number of comments from people who seemed to think of this as a threat.

Please call Idaho Rep. Priscilla Giddings at 208-332-1033 and tell her not to incite violence, especially not against college students exercising this 1st A rights.

Students came to peacefully protest the Idaho State GOP Convention. Rep. Priscilla Giddings took a picture with them and posted it to FB with the following caption:

Except, showing a spent shell is hardly “inciting violence” unless you’re completely and totally unhinged. But, if you’re an anti-gunner, you probably already are. 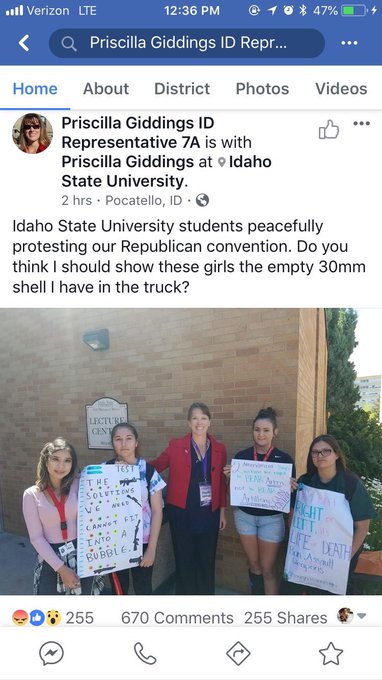 Wow..Representative Priscilla Giddings..you’re an adult, right?
I’m sure a lot of people are now aware of other empty things you have..

Students came to peacefully protest the Idaho State GOP Convention. Rep. Priscilla Giddings took a picture with them and posted it to FB with the following caption:

Says the woman whose mother kept an unsecured server in their home and conducted official, classified business on it. Maybe, just maybe, you’re not the best judge of what a decent human being looks like. I’m just saying.

Then there were some comments on the post itself that Scary Mommy opted to highlight.

Um…that’s not a threat. In fact, showing someone an empty shell is about as non-threatening as you can get. I mean, it’s just a piece of metal at that point. I mean, sure, it can be reloaded in theory, though I don’t know a soul who reloads 30 mm.

Look, there are some who are upset at Giddings mocking these girls, though I suspect that has more to do with the ideologies involved more than anything else. Had these girls been pro-gun and the politician mocked them, I’d put money down that not a damn one of these people would have opened their cake-disposal to act all indignant and Scary Mommy, which should probably be retitled Scared Mommy, wouldn’t have run the damn story.

A threat, even a thinly-veiled one like the blog tried to claim, at least implies harm to people. Unless you’re afraid of these kids getting the vapors and passing out at the sight of a spent casing, there was no way they could be harmed. Frankly, if you think that was a potentiality, then you should probably spend more time toughening these kids up for the real world that isn’t about to be interested in their sensitive feelings.

If people think a casing equals violence, then they’re illustrating the absolute epitome of the term “first world problems.”

Violence is a real thing. It’s a thing that impacts our streets and streets around the world. However, showing someone a spent round is not now and never has been a threat, violence, or anything of the sort.

Frankly, if you want to be taken seriously, you need to try something different and act like serious people for a damn moment and not a bunch of terrified schoolmarms who are about to have a stroke over every little thing they dislike.

Since we all know that’s not going to happen, I’m just going to point and laugh at you instead.