Like Rush Limbaugh said this additional time for the FBI to investigate will never be enough the DemocRats want to drag the nomination out until after the midterms in hopes they will retake the House and Senate.

Today was supposed to be simple. The Senate Judiciary Committee was set to vote on advancing the Supreme Court nomination of Brett Kavanaugh to the Senate floor. Then, 60 hours of debate, followed by a final vote on Tuesday. It was going to be a party-line vote. It was going to be dotted with Democrats once again whining about the process. They also want an FBI investigation into the sexual misconduct allegations lobbed against Kavanaugh. One of the women, Christine Blasey Ford, testified before Congress yesterday. Judge Kavanaugh addressed the committee later that afternoon. In a fiery speech, he defended his name, reputation, and career, which has been tarnished by what appears to be a coordinated political hit job. He stringently denies the allegations; Ford alleges Kavanaugh tried to rape her at a high school party. None of the three allegations hurled against him have any evidence or witnesses. It’s devolved into a circus. On top of that, Sen. Jeff Flake (R-AZ) decided to stab his party in the back.

Just started, tonight, our 7th FBI investigation of Judge Brett Kavanaugh. He will someday be recognized as a truly great Justice of The United States Supreme Court!

Yes, the committee voted to advance the nomination, but not before Flake decided to take the role of Benedict Arnold, suggesting a delay in the final confirmation vote in order to have the FBI investigate the claims. It’s on a weeklong timetable. Sens. Murkowski (R-AK), Collins (R-ME), and Manchin (R-WV) all jumped onboard supporting this measure. The White House, now forced into a corner, has formally ordered the FBI to conduct an investigation. It’s the wrong move. Flake decided to give this left wing smear campaign another week of oxygen, allowing more time for last minute shenanigans to possibly occur. We know that when the FBI submits their preliminary report, the Democrats will demand more time. There is nothing that will ever make them change their minds about this man. It’s delay, delay, and delay some more. That’s the playbook Democrats are reading to derail Kavanaugh. And to no one’s surprise, Ford’s legal team rejects the “artificial limits” of the investigation (via Fox News):

A note on what the FBI can and can’t do: This isn’t a criminal investigation, no grand jury, so they can’t subpoena records or force anyone to testify.

So basically, they can do less than Senate investigators who have already done much investigating

A note on what the FBI can and can’t do: This isn’t a criminal investigation, no grand jury, so they can’t subpoena records or force anyone to testify.

Dr. Ford’s lawyer, Debra S. Katz, on FBI probe: “No artificial limits as to time or scope should be imposed on this investigation.”

“I’ve ordered the FBI to conduct a supplemental investigation to update Judge Kavanaugh’s file,” Trump said in a statement. “As the Senate has requested, this update must be limited in scope and completed in less than one week.”

Trump’s order came after after several undecided senators whose votes are needed to confirm Kavanaugh called for a weeklong FBI probe before a floor vote.

An attorney for Kavanaugh accuser Christine Ford, Debra S. Katz, said in a statement Friday that Ford “welcomes this step in the process.” But Katz took issue with the one-week limit, saying no “artificial limits as to time or scope should be imposed on this investigation.”

When asked if they could get the investigation done in a week, a senior FBI official told Fox News, “That depends on the schedules of everyone we’d have to interview, including the accuser, accused and witnesses.”

Ford has named three other people she said attended the 1982 party where she claims she was assaulted. All three named people have said they have no memory of the event, though two said Friday they’re willing to cooperate with the FBI.

“I will cooperate with any law enforcement agency that is assigned to confidentially investigate these allegations,” Kavanaugh friend Mark Judge said.

“My client, Patrick J. Smyth, is happy to cooperate fully with this FBI investigation,” said attorney Eric B. Bruce.

Brett Kavanaugh is one of the most qualified and most impressive Supreme Court nominees in memory. This is a nomination that deserves to move forward — and that is precisely what is happening.

In the Senate, Majority Leader Mitch McConnell said that the nomination is moving forward—and all 51 Republicans have agreed to that end. Also, this FBI investigation is not a criminal one, meaning they can’t force people to testify or subpoena records. In other words, it’s all part of the delay tactic deployed against this Supreme Court nomination. It’s now a street fight. It’s open warfare—and it seems clear that the GOP was not ready to get this deep into the muck when it came to fighting Democrats. It’s going to be another intense and nasty seven-to-ten days. Brace yourselves. 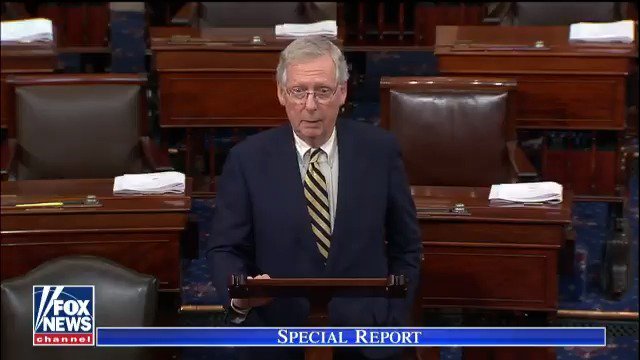 .@senatemajldr on Kavanaugh nomination: “I’m pleased to announce that all 51 Republican members of the Senate support the motion to proceed to the nomination.” https://fxn.ws/2DFsZpR 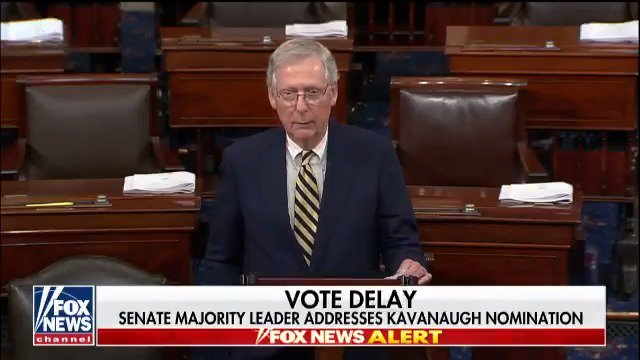 .@senatemajldr on Kavanaugh hearing: “The picture that diverged from all of this is clear: Judge Kavanaugh is one of the most qualified and most impressive Supreme Court nominees in the history of our country.” https://fxn.ws/2DFsZpR

“For the information of all our colleagues, there were two very significant developments today. This morning, the Judiciary Committee reported out Judge Kavanaugh favorably. All eleven Republican members of the Judiciary Committee voted in favor of reporting him out with a favorable recommendation. Number two, we will shortly move to proceed to the Kavanaugh nomination. And I’m pleased to announce that all 51 republican members of the Senate support the motion to proceed to the nomination. One hundred percent of the Republican conference supports proceeding to the Kavanaugh nomination.

“Now in Committee, they reviewed the most pages of documents ever produced pertaining to any Supreme Court nomination. Literally hundreds of judicial opinions from his tenure on the Court of Appeals for the D.C. Circuit. And five days of hearings, during which Judge Kavanaugh testified for nearly 40 hours. Judge Kavanaugh testified on every topic from complicated legal subjects to sensitive personal matters. And there were testimony and statements from countless personal friends, classmates, coworkers, former clerks, and other associates.

“So the picture that emerged from all this is clear: Judge Kavanaugh is one of the most qualified and most impressive Supreme Court nominees in the history of our country. He has excelled at the highest levels of legal scholarship. He holds two degrees from Yale, and for years has lectured at Harvard Law School. He has issued more than 300 legal opinions from what is widely considered the second highest court in the nation. Several have subsequently been cited in the Supreme Court’s own majority opinions. Along the way, he has built an outstanding reputation within the legal community for his clear, thoughtful writing and his exemplary, fair-minded judicial temperament.

“Judge Kavanaugh’s qualifications have been affirmed by his peers and by renowned legal scholars from across the ideological spectrum. One self-described liberal Democrat who advised him at Yale said that Judge Kavanaugh, quote, ‘commands wide and deep respect among scholars, lawyers, and jurists.’ And this praise has been echoed by hundreds of character witnesses who have testified before the Senate or written us letters to praise Judge Kavanaugh’s personal character and his integrity in the strongest terms.

“The Committee has also thoroughly investigated the last-minute allegations that have been brought forward. The evidence that has been produced either fails — fails — to corroborate these accusations, or in fact supports Judge Kavanaugh’s unequivocal denial. And in some cases, the accusers have even recanted their baseless allegations. All in all, this is a nominee who has received what many consider the ‘gold standard’ of judicial qualification — a rating of ‘unanimously well qualified’ from the American Bar Association.

“So, this is a nomination that deserves to move forward — and that is precisely what is happening. I commend our colleagues on the Committee for sending this impressive nominee here to the floor with a favorable recommendation. Now we will keep the process moving: The full Senate will begin considering Judge Kavanaugh’s nomination today.”