U.K Home Secretary Sajid Javid is a useful idiot destroying what once was Great Britain.

The people of once Great Britain are being destroyed by willful ignorance about the evils of Islam.

That’s a useful first step. There are indeed Muslims who are “driven by an ideology” and other Muslims who “practise their own religion in their own way with their own family and their own friends,” that is, Muslims who are bringing Sharia to the UK and advancing the cause of political Islam, and those who are not. What, however, is Sajid Javid doing to confront the exponents of political Islam and Sharia? So far, British officialdom has been consistently supine before them. And how does Sajid Javid propose to determine which camp Muslims in Britain fall into? Without any reliable way to distinguish “Islamists” from “those who practise Islam,” how does making this distinction in the abstract help secure the survival of Britain as a free society? 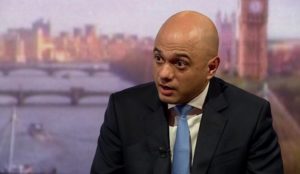 …Javid also highlighted the benefits of immigration. “It might sound strange coming from a home secretary – I’m a big fan of immigration and what it means for our country, in terms of how it makes us stronger … I see people all the time today and they really don’t care if their doctor is of Pakistani origin, what they care about is that they are getting a good service and these are people that they do really see as British. I do think society has changed very positively like that.”

He said Islam was compatible with British values. “There are many Muslims that I know who are very devout … that are model citizens in terms of what they do their job, how they care for others.”

But he condemned those who saw as Islam as an ideology, saying he would make a distinction between “those who practise Islam and those who you might describe as Islamists, that are driven by an ideology, rather than practise their own religion in their own way with their own family and their own friends. They see it as their duty to spread to ideology and also to disrespect at the same time the laws of the country that they have chosen to live in.”