Rep.Eric Swalwell(Dumbass-CA)mouths lots of anti-gun platitudes but they will not work.

Instead of passing new gun laws lets try something radical and enforce the laws on the books now.

The way I understand it there is 20,000 plus gun laws on the books today.

Out of all the Democratic presidential nominees, no one has been as serious to solve the gun debate as California Rep. Eric Swalwell.

Swalwell has such a comprehensive gun control plan, he can fit it on any 280-character tweet. The candidate has offered real and effective solutions, unlike all the other Democratic candidates. Swalwell has laid out his plans on Twitter to nuke America and ignore women he disagrees with to fix our gun crisis. It is no wonder with effective plans like that he has been polling at 0%.

And it would be a short war my friend. The government has nukes. Too many of them. But they’re legit. I’m sure if we talked we could find common ground to protect our families and communities.

23K people are talking about this

The first solution is quick, easy and effective. Let’s just nuke America! Who needs to care about guns if there is no one left to use them? 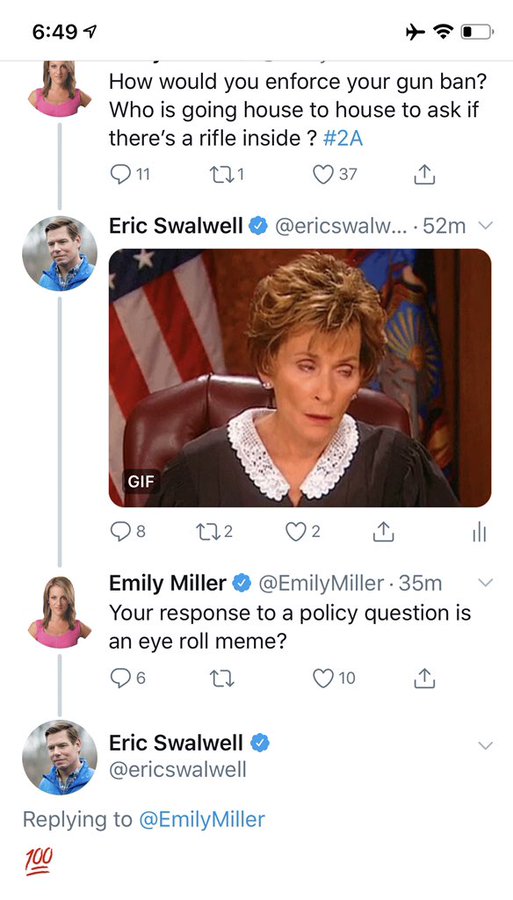 A beginner’s guide to owning #2A trolls. Their BS noise doesn’t intimidate me anymore. They would rather flat LIE, e.g., “going house to house” than save your kids. Start checking them. @MomsDemand got your back.

Show your dominance over a woman asking a serious policy question by responding with a meme of Judge Judy rolling her eyes and stating the person “doesn’t intimidate me anymore.” Show those evil moms who want to protect their children who is boss.

Can you explain to me the difference between assault weapons and semi-automatic rifles? Is .223 ok but 30.06 not? Why?

No different. I interpreted her question to mean semi-auto rifles covered under what’s considered an assault weapon. cc: @DLoesch

3,621 people are talking about this

It is fine to engage in debate, but you have to know when enough is enough. Here is a perfect example of specifically calling someone out by name to make a point and then running away when they ask a question. You don’t owe anybody anything, even if you are the one who called them out first.

The most serious proposal the candidate gave was to prosecute people who did not give up their guns and decided to keep their guns in their homes. This is good for his campaign because the sign of a true Democratic candidate is to throw out crazy unconstitutional ideas.

Ms. Loesch — I see you’ve spent another day blowing up my Twitter. Thank you for following! But here’s the deal, you’re an @nra mouthpiece. I don’t aim down, so I don’t debate mouthpieces. But send me your president, @OliverLNorth. I’ll debate him anywhere. #EnoughIsEnough

BTW — @ericswalwell has dodged legitimate questions about his gun confiscation-and-jail policy for quite some time:https://dailycaller.com/2018/11/16/dana-loesch-eric-swalwell-gun-control/ …

22.2K people are talking about this

Dana Loesch, a life-long advocate of the second amendment and national spokesperson for the NRA, was clearly not important or knowledgeable enough to debate someone with the intellect of Swalwell. However, he has declared he will debate a man “anywhere” because they are the only ones who should be involved in conversations about guns.

One thought on “VOTE: HOW SHOULD ERIC SWALWELL SOLVE THE GUN DEBATE?”