I wonder if some of the people at Swalwell’s rally were paid to be there?

Rep. Eric “Nuke ’em All” Swalwell is campaigning for president primarily on gun control. Not that anyone can tell, as he’s not gaining any traction with the Democratic base, despite its supposed love affair with new gun regulations.

To try and gain momentum, Swalwell decided to hold a gun control event right outside of the National Rifle Association’s offices. Not only did the event not go well, but the NRA is also mocking him.

It started with Swalwell bragging about the effort. 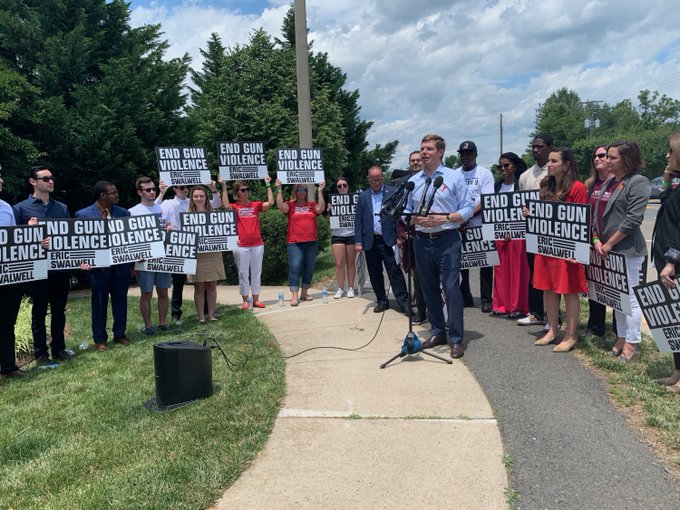 THIS IS IT! We’re announcing our comprehensive plan to END GUN VIOLENCE!

From there, it was all but begging for comment.

The NRA responded by mocking the media effort for the small number of attendees, which some reports pinned at about eighteen people.

“Look!” tweeted the official NRA account. “All of presidential candidate Swalwell’s supporters came out to our headquarters today.”

“No wonder he is polling at 0%,” they joked, referring to the relatively low support Swalwell has received in polls of 2020 presidential candidates.

Honestly, that’s a pathetic turnout, and I don’t blame the NRA for the mockery. It’s not like Swalwell can do anything, and it’s not like he’s someone willing to work with them either. He’s made what name he has for making nonsense statements about guns.

After all, he threatened to nuke American citizens.

Of course, we’ve noted his pathetic turnouts before. Of course, that was Texas. One would expect his support to be less than stellar there, even though he was in one of the more anti-gun areas.

The most recent images suggest something interesting.

You see, Swalwell is the only candidate campaigning primarily on doing away with evil “assault rifles.” Most other candidates have those as part of their plans, sure, but he’s the only one who is trying to make this a key issue for his entire campaign.

Despite that, he’s garnering no support. None.

What does that mean for the gun control movement? Well, a few things, but perhaps the biggest is the fact that while the typical Democratic voter may support gun control, nothing has changed so far as how much they support it. It’s not a primary issue for even left-leaning voters. It’s one that they’ll pontificate on, but it’s not a driving force in their voting.

One would think that if it were, a purely anti-gun candidate would be doing far better.

Now, plenty of other candidates have their gun control plans up on their websites, to be sure. Most famous, perhaps, are Sen. Cory Booker’s licensing proposal and Sen. Kamala Harris’ declaration to legislate by fiat. Those are far from the only ones, however.

Yet all of those candidates also include policy proposals on things like the environment, immigration, education, and so on.

Further, the frontrunner, former Vice President Joe Biden, has perhaps the most toned down anti-gun rhetoric of all the candidates. It’s still there, but it’s not nearly as fiery as someone like Booker, much less Swalwell.

The NRA mocked Swalwell, but the truth is that his failure to garner much support may be a cause for celebration.