Here is a look at toilets used in prison and no doubt they are the same in the detention centers.

For the Delusional DemocRats, the sink and toilet are different and if you look in the right-hand corner there is a place to drink from.

I say these setups for ten years I spent as a Correctional Officer.

You’ve gotta hand it to her consistency — she never misses a chance to politicize and weaponize any issue.

The kick she’s on now is taking the creation she PERSONALLY helped create by (a) refusing to change the immigration policy, or even acknowledge it was an emergency, (b) REDUCE the funding for beds available for the holding of detainees who have come across the border and (c) bully companies that do business with the Border Agents — including Wayfair sending mattresses for the children to sleep on.

Take THAT, Border Agents! No mattresses for YOU! That’ll learn ya!

We’re still not sure how depriving children she pretends to care so much about of necessities like shelter or mattresses gives her the moral high ground on ANYTHING, but her acolytes seem to be lapping it up.

Now, since that staged photo op of ‘feigned horror’ at the ‘cages’ blew up in her face so dramatically… 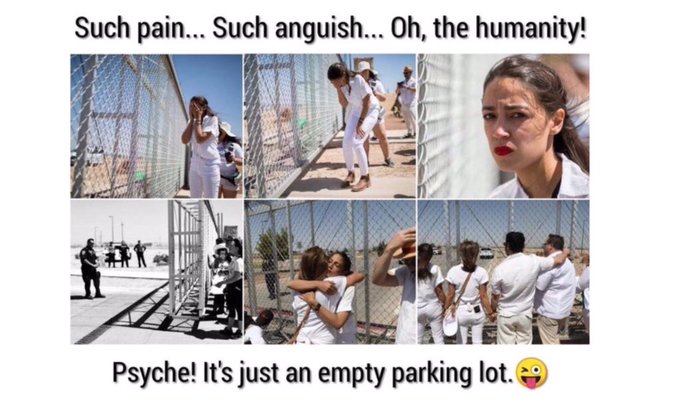 @AOC joins in on the fake news photo ops. Pretending to be crying seeing illegal children in cages when in fact she was looking through a fence directly into an empty parking lot! #FakaNews

… she’s taken a trip to see them herself. Or so we’re told.

She’s got a lot to say about how everything sucks and it’s all Trump’s fault. (Neo-Soviet that she is, this is obviously the only song she knows how to sing.)

Rep. Alexandria Ocasio-Cortez said Monday that illegal immigrants and asylum-seekers detained at a pair of U.S. Customs and Border Protection stations she visited are ‘drinking out of toilets’ – a claim an agency official quickly denied.

Speaking outside a Border Patrol station in Clint, Texas, she raged: ‘There’s abuse in these facilities.’

‘This was them knowing a congressional visit was coming. This was CBP on their best behavior. Telling people to drink out of the toilet.’

AOC said she ‘forced’ herself into a cell with detainees and one woman told her officers were waging ‘psychological warfare’ and that the agents often called them ‘wh***s.’

The 29-year-old congresswoman claimed officers laughed at migrants drinking out of toilets.

…But a CBP official said Monday in the early evening that plumbing fixtures at the locations Ocasio-Cortez visited are standard-issue jail appliances with sinks that dispense safe drinking water attached to toilets in a single unit.

‘Of course that’s what we have,’ the official said. ‘No one is drinking toilet water. They’re drinking potable water from the sink attached to the toilet. It’s what you would find in every municipal jail in the United States.’
Source: DailyMail

Think something more or less along the lines of this: 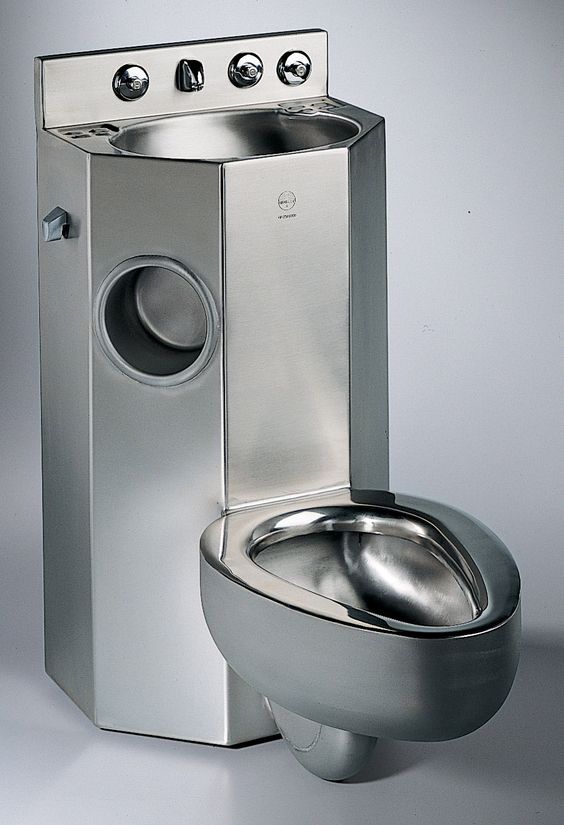 Actually, a LOT like those, as evidenced by a judicial photo from 2016. 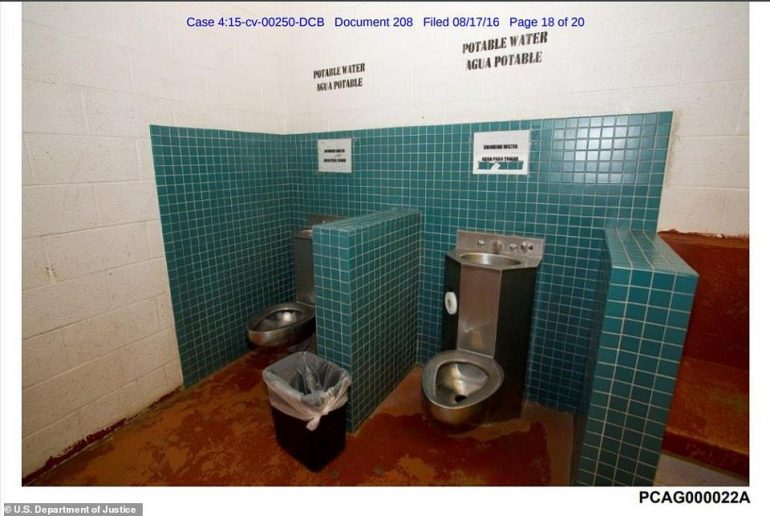 You’d expect that an elected official in such a position was perfectly professional, and not an emotionally over-wrought child — right? Then you must be talking about someone OTHER than AOC, whose entire schtick is emotional outbursts and drama.

Here’s another perspective on her visit:

“She comes out screaming at our agents, right at the beginning [of the tour] … Crying and screaming and yelling,” said one witness who said he was stunned by the outburst in front of approximately 40 people.

“The agents, they wanted to respond, but they held back because she’s a congressional delegate. But when you have someone yelling at you in a threatening manner … ” the same person said. “They were like, ‘Hey, you need to kinda step back.’”
Source: Washington Examiner

Not a good look. It continues…

A second official said she went in and out of the cell during the group’s briefing nearby and returned to the group several times to share information she had learned from detainees, including that one person had drunk from a toilet.

The congresswoman told the group she would not go with the 13 other House Democrats on the tour of the facility and stayed with the family.

…“Something under her breath, ‘Oh, all these guys in here are gonna f–k me.’ The agents are standing there behind the computers. One of the agents laughed at something he was saying to another agent, and she got irate and flipped out,” the second Border Patrol official said. “Now they’re under investigation for it. She took it as they were laughing at her and screams at them and says, ‘What’s so funny?’”

…The congresswoman, who led a charge in 2018 to abolish Immigration and Customs Enforcement, recounted the scene differently in a social media post afterward and did not mention yelling at agents.

…The agent on scene said the congresswoman misrepresented why a person in custody had drunk from a toilet.

“So this is what happened with the migrant and drinking water from toilet: she wanted water, didn’t know how to use the faucet in the cell, and drank from the toilet. She never told AOC that we made her drink from the toilet. AOC, of course, changed it … This was when she [the migrant] was apprehended and brought into the facility,” according to the agent.
Source: Washington Examiner

So not only is she thin-skinned, vindictive, prone to dishing out personal attacks, bouts of hyperbolic indignation, outright lies in the service of her ‘righteous’ cause and so on…

But she’s an emotional wreck on top of everything else.

Oh great. She’ll be a fantastic help in solving problems.

Just as soon as she recognizes that she’s been the one creating them.