I think I can safely say that Alexandria Occasional-Cortex has some severe mental issues. 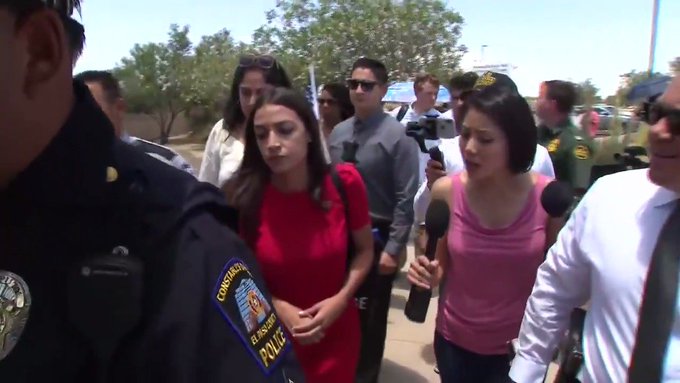 Question: “Do you have any comment about what was posted about you in the alleged Facebook group?”

Rep. @AOC: “I think it’s just indicative of the violent culture that we saw.” http://hill.cm/wb5d4Ow

After the group entered the El Paso Station on Hondo Pass Drive and received a briefing about the operations there, Ocasio-Cortez — who longs to be the center of attention in any situation — wandered off to a migrant holding area.

The Washington Examiner reported that witnesses said the freshman lawmaker eventually emerged and began to yell, in a threatening manner, at Border Patrol agents. “She comes out screaming at our agents, right at the beginning [of the tour] … Crying and screaming and yelling,” one witness reportedly said.

Anna Giaritelli, a reporter for the Washington Examiner, relayed the information in a Monday tweet.

SCOOP: Rep. Alexandria Ocasio-Cortez, D-N.Y., screamed at federal law enforcement agents “in a threatening manner” during a visit to a U.S. Border Patrol facility in El Paso, Texas, Monday afternoon and refused to tour the facility, according to two people who witnessed it.

22K people are talking about this

Not only did she allegedly throw a fit, she told the other members of the group that she refused to go on a tour of the facility and instead stayed with a migrant family. “The agents, they wanted to respond, but they held back because she’s a congressional delegate. But when you have someone yelling at you in a threatening manner … ” the same witness reportedly said. “They were like, ‘Hey, you need to kinda step back.’”

As expected, Ocasio-Cortez used the visit to further exaggerate and dramatize the situation on the U.S. border, describing in a series of tweets the “horrifying” experience she witnessed.

After I forced myself into a cell w/ women&began speaking to them, one of them described their treatment at the hands of officers as “psychological warfare” – waking them at odd hours for no reason, calling them wh*res, etc.

Tell me what about that is due to a “lack of funding?”

Now I’m on my way to Clint, where the Trump admin was denying children toothpaste and soap.

This has been horrifying so far. It is hard to understate the enormity of the problem. We’re talking systemic cruelty w/ a dehumanizing culture that treats them like animals.

27.6K people are talking about this

Within her tweet storm, she referenced an earlier situation that allegedly involved a “secret” Facebook group of border agents who were threatening her, according to Fox News. She then accused agents of making women at the holding facility drink out of toilets.

I see why CBP officers were being so physically &sexually threatening towards me.

Officers were keeping women in cells w/ no water & had told them to drink out of the toilets.

This was them on their GOOD behavior in front of members of Congress.

81.7K people are talking about this
also claimed that a Border Patrol agent familiar with past congressional visits, such as those by Democratic Rep. Veronica Escobar, have never reported anything similar to what Ocasio-Cortez described, even after visiting the facilities “15 times.”

“We’ve never hidden anything from her,” the official said.

Of course, without video of the incident, we might never know exactly what took place — and I’m willing to give someone the benefit of the doubt. But something like this is not out of character for Ocasio-Cortez; going into full “drama queen” mode to score headlines and attention is definitely in her wheelhouse.

She already faces a credibility problem.

It’s difficult to take Ocasio-Cortez seriously, given her past outrageous comments and dramatic outbursts such as allegedly yelling at U.S. Border Patrol agents, or the fact that she compared the facilities to “concentration camps” earlier in June.

And one has to question her reasoning for refusing to tour the facility with the rest of her group. Was it because she knew she would see the immigrants there are not being treated as inhumanely as she claims them to be?

I don’t think it’s unreasonable to assume that Ocasio-Cortez prepared this staged, dramatic tantrum to help push her false narrative and continue to attack the Trump administration on border policy. It’s cheap and easy bait for the liberal mainstream media.

If she wants to make a change in policy, she’ll learn that the proper way is through U.S. Congress and not by screaming at others who are simply doing their jobs.