With the DemocRats it is a case of don’t do as we say.

It is fine for DemocRats to take money from Big Tobacco and Big Pharma but it is wrong for Republicans to do so.

The DCCC accepted a donation over four times larger from the same company.

The Democratic Congressional Campaign Committee on Wednesday put out a press release slamming Republican congressional candidate Young Kim for accepting money from tobacco giant Altria, only a few months after accepting a $15,000 donation from the same company.

While the original press release has been deleted, the Washington Free Beacon obtained screenshots showing the DCCC going after Kim for donations she received from “the NRA and K Street’s Big Tobacco and Pharma.” The press release referred to the tobacco industry as “disreputable” and that it has been one of the industries “at the forefront of stopping progress for Orange County families that would ensure their health, safety, and security.”

The donation that the DCCC highlighted about Kim was a $3,500 donation from the Altria Group in 2018. The press release did not mention Altria’s $15,000 donation to the DCCC back in April.

The DCCC did not respond to a request for comment on the press release being taken down or the $15,000 donation.

Politico reporter Jake Sherman tweeted out a screenshot of Politico’s afternoon newsletter highlighting the hypocrisy of the attack on Kim taking money from Altria since DCCC chairwoman Cheri Bustos (D., Ill.) took Altria money in 2015, 2016, and 2017, according to FEC records. Altria also donated $2,500 to Friends of Bustos in April.

“Also in Playbook PM … the ⁦@dccc⁩ whacked ⁦@YoungKimCA⁩ for taking Altria money,” Sherman tweeted. “But ⁦@RepCheri⁩ also has taken thousands from the tobacco giant The @dccc has removed the release from its website. Easy stuff to check. Insane hypocrisy.”

Also in Playbook PM … the ⁦@dccc⁩ whacked ⁦@YoungKimCA⁩ for taking Altria money. But ⁦@RepCheri⁩ also has taken thousands from the tobacco giant.

The @dccc has removed the release from its website. 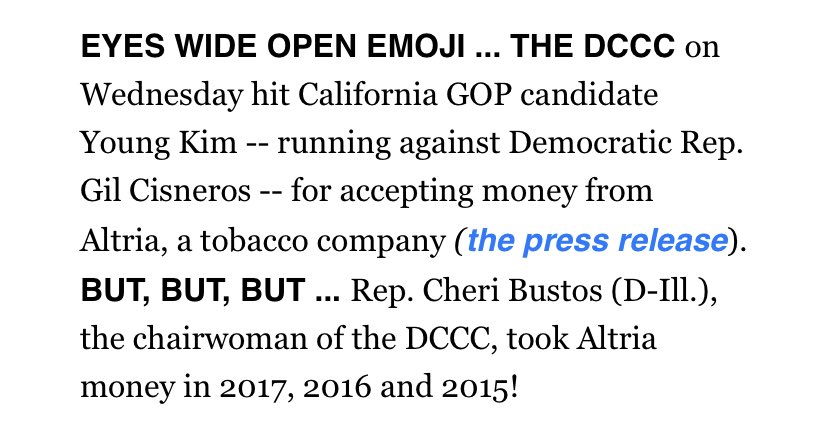 93 people are talking about this