The left is hoping they beat President Trump so when Ruth Buzzy(Bader)Ginsburg dies or leaves the Supreme Court she will be replaced by a leftist.

Ahead of the 2020 election, leftist organization Demand Justice has released a list of potential nominees for the Supreme Court should a Democrat win the White House.

“In 2016, Donald Trump released a shortlist of possible Supreme Court picks, and it succeeded in rallying conservative voters to his side. In 2020, the Democratic candidates running for president should also state what kind of justices they would appoint. Doing so would show their commitment to the Supreme Court as an issue and draw a clear line in the sand about what is at stake in the coming election,” Demand Justice released in a statement. “To prod the candidates, Demand Justice is releasing its own Supreme Court shortlist of possible nominees in the next Democratic administration. Our list is made up of brilliant lawyers who have spent their careers fighting for progressive values and represent the diversity of our nation.”

“In releasing this list, we also hope to make clear that the next Democratic president ought to approach the task of nominating judges with a new playbook––one that prioritizes unabashedly progressive lawyers and legal thinkers, who have all too often been pushed aside,” the statement continues.

According to the Judicial Crisis Network, an organization that has supported nominees like Justice Brett Kavanaugh and Neil Gorsuch, the Demand Justice list is quite radical.

These people are radicals. This list is a dream come true for far left activists who seek to turn the courts into a political super-legislature. https://twitter.com/brianefallon/status/1184083118166290433 …

Democrats running for President should tell primary voters who they might appoint to the Supreme Court. And they should be bold enough to pick someone who’s worked to defend civil rights, worker’s rights or reproductive rights – like those on this list:https://demandjustice.org/supreme-court-shortlist/ …

129 people are talking about this

Only 8 of the 32 potential nominees on this list have judicial experience. Which makes sense – they’re looking for activists, not judges.

Trump’s list – with the sole exception of Sen. Mike Lee – was all judges, bc they were chosen for judicial philosophy, not political views.

79 people are talking about this

Amazing: there must be hundreds of federal judges Obama put on the courts, and only 4 make this list. This list would have been way too liberal for Obama.

This is an attempt to return the Court to 1960’s style judicial activism – left wing judicial tyranny. They keep losing elections, so now they’re trying to pack the courts and get their agenda done with radical activist judges.

62 people are talking about this

My take on the 32-member #SCOTUS short list: by excluding law firm partners, @WeDemandJustice excludes most of the people Hillary Clinton would have picked. Justice Sotomayor would also be out. https://reason.com/2019/10/15/who-is-and-is-not-on-the-demand-justice-scotus-not-so-shortlist/ … 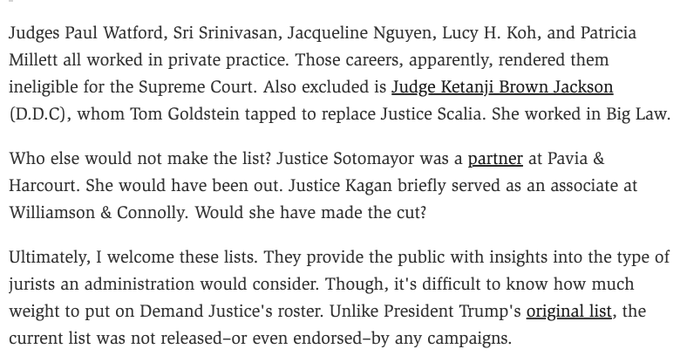 Even SCOTUSBlog is knocking it.

The @WeDemandJustice list is a diverse group that many will view as highly qualified potential SCOTUS nominees. But it does not remotely resemble anything like a plausible Democratic shortlist—whether or not it should. It just represents an ideal of the party’s progressive wing.

39 people are talking about this

In the meantime, President Trump has not only successfully placed two Justices on the Supreme Court, but has nominated, with the Senate confirming, federal judges at record pace.