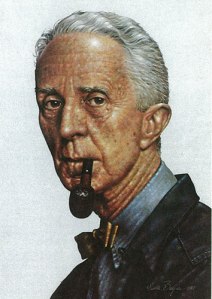 Norman Rockwell has been a well-known artist since his first magazine cover.  His work helped the home front during the war in more ways than just a nice painting at the news stand.  He produced over 300 covers in his 50-year career.  His influence is still felt today.

Willie Gillis, Jr. (more commonly simply Willie Gillis) is a fictional character created by Norman Rockwell for a series of  World War II paintings that appeared on the covers of eleven issues of the Saturday Evening Post between 1941 and 1946.   With the rank of  Private, Gillis was an  every man whose career was tracked on the cover of the Post from induction through discharge without being depicted in battle.   Gillis and his girlfriend were modeled by two of Rockwell’s acquaintances.

Although Gillis was not exclusively used on Post covers, the Willie…