No big surprise as Shifty Schiff is a DemocRat and the DemocRats control the House.

Let’s all remember this when Democrats and their media patrons lecture us about the importance of ‘principle before party’, shall we?

Was ever there any doubt how this vote was going to go?

Here is a look at the resolution itself.

We are calling up a resolution that condemns Chairman Adam Schiff and the way he has abused his power to mislead the American people. Read the complete censure resolution here: 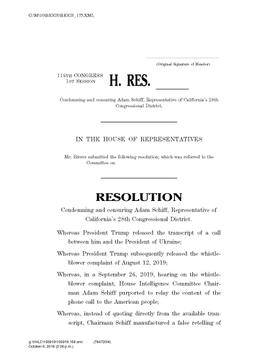 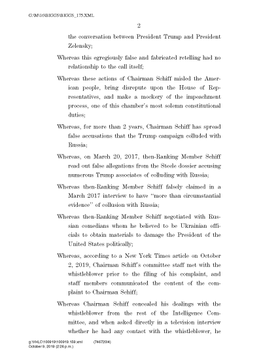 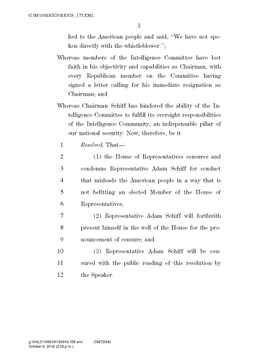 9,606 people are talking about this

But why would we really expect the Democrats to take this seriously? After all…

— Who *really* cares if the man — who sits in a privileged position giving oversight over some of the most classified information the country holds — repeatedly shows up as a likely culprit for leaks that help Dems and hurt Republicans?

— Who *really* cares if his staff were (conveniently) meeting with witnesses in Ukraine that were to be interviewed BEFORE the details about the whistleblower complaint were public?

— Who *really* cares that he refuses to have a transparent process including the right of the other side to cross-examine or call witnesses of their own choosing — as has been done by previous impeachments.

— Who *really* cares that no specific enumerated crimes have been alleged that can be proven or disproven without the endlessly Schif-ting goalposts every time one of their allegations is disproven?

— Who *really* cares if he himself — and his office — have literally done exactly the things they are alleging are ‘impeachable offenses’ when they accuse the President of doing it.

None of that matters to this crowd. As of November 2016, we entered a phase of bare-knuckled resist-at-all-costs political WAR. And it took some time before our side wised up to that.

The voters DARED to stand in the way of the Democrats’ fundamental transformation of America, and they will NOT tolerate any such belligerence from the plebes… those little people must learn their place.

House Republicans tried to force a floor vote Monday on a resolution to censure House Intelligence Chairman Adam Schiff over his handling of the impeachment inquiry into President Donald Trump. But Democrats tabled it, essentially killing the resolution.

The resolution said they dissaprove of Schiff’s “conduct that misleads the American people in a way that is not befitting an elected Member of the House of Representatives.”
Source: USAToday

What was Schiff’s reaction? Exactly as you might expect… he climbed up that pedestal of his and waxed sanctimonious.

It will be said of House Republicans,

When they found they lacked the courage to confront the most dangerous and unethical president in American history,

They consoled themselves by attacking those who did.

76.7K people are talking about this

But what about 2020? Could a moral person pull a lever for Trump with their integrity intact? Would Jesus himself vote for Trump? We’re glad you asked. There’s a brand new book that covers precisely that question: