I do not believe there will ever be a smart gun in my lifetime.

Hint: It isn’t because the evil gun industry is refusing to try, gun controllers’ claims to the contrary.

Recently, the Jacksonville, Florida Sheriff’s Office had an embarrassing situation. JSO tweets out a nightly advisory to make sure your guns are out of cars and properly secured. That positioned them perfectly for recent ridicule when someone stole a cruiser… and the guns and gear inside

The vehicle was recovered. The weapons were not.

Which prompted a well-intentioned person to tweet a suggestion…

I know this is a long shot. But should consider some type of biometric scanner for issued firearms. And not to be funny but we should all follow the 9pm routine. I understand that officers take their vehicles home. Or implement some type of in trunk safe for weapons.

I noted that “smart guns” are a lot tougher to do in the real world than most people realize. He responded:

I figured that much. Still something should be implemented to where is secured but then I guess you run the issue when it’s needed you have more steps to get to it.

Part of the problem is that “something” is really “somethings. Here’s a primer on why smart guns, or other “foolproof” firearms security is hard.

Basics of keeping any firearm running

Firearms are over-stressed tools. They are subject to G-shocks as high as the tens of thousands of gravities, temperatures that can take skin off, and pressures that can turn them into grenades. That firearms can continue to operate for dozens of rounds, much less hundreds and thousands, is a monument to metallurgy and engineering.

Besides the torture firearms inflict upon themselves, they have to operate reliably in environmental conditions the urban office-bound human may have trouble imagining. External temps ranging from far below zero Farenheit to well over one hundred degrees. Dust, grit. Corrosion-inducing moisture. Mud. Ice. Even blood on occasion.

Anything you add to a firearm to make it “smart” has to withstand all of those same conditions.

Part of my professional experience comes into play here. I’ve kept fancy electronics running under some bizarre conditions. I’ve done quality control work on electronics, including components for military weapons systems. It turns out there’s a reason that MILSPEC systems seem over-priced to folks used to commercial-off-the-shelf (COTS) equipment. It isn’t all price-gouging, graft, and bribery. A “smart” gun is going to require electronics. Electronics in a firearm are sensitive to all the conditions that the gun is, and more so. An over-heated gun may stop working until it cools. Over-heated electronics will likely need to be replaced. That’s a bit of a problem if you’re trying to use your handgun to defend your home. Same with corrosion from moisture/humidity.

And then there are the G-shocks. Any electronics you hang on a firearm will have to survive thousands of Gs. Repeatedly. Every round fired.

To demonstrate this, take your fancy smart phone. Throw it firmly onto a concrete floor. Does it still work?

A smart gun will have to work after the equivalent forces. Over and over. You think recoil hurts your hand? Imagine what it’s doing to surface mount technology, large-scale integrated circuit components.

As mentioned, I did some quality control work for components in a military weapons system; little transmitters for which the company charged many thousands of dollars. The reason for the cost was multi-fold.

Each unit had to be hand assembled. That was to ensure every screw, solder joint, and RF connector would withstand serious g-shocks. Each one went on a g-table for testing. Any unit that failed was one we spent money building, but couldn’t sell.

Each unit had to withstand multiple enormous temperature shifts. We literally tested these by cycling them multiple times between an oven set to…hmm, that temperature might be NOFORN… and then to a freezer set to something rather colder than you’d want for ice cream. And back to the oven. Lather, rinse repeat.

Again, a unit killed by thermal shock was money we couldn’t recoup. (And I’ll just skip the part about liquid nitrogen and tuning.) The military was willing to pay our prices because they need weapons that will work no matter what. So does an honest private citizen defending his family. To get MILSPEC-style reliability in a “smart” gun, you’d need MILSPEC-style construction, testing…and pricing.

Requiring — reliable, at the current level of technology — “smart” gun technology means the right to keep and bear arms is limited to those wealthy enough to afford a “cheap” handgun priced in the tens of thousands of dollars. Poor people don’t need no 2A, right?

“But people have made successful smart guns,” I imagine hearing someone mutter. “What about the Armatix iP1?”

The iP1 was/is…a very sad joke. It was an RFID-based system rather than biometric (more on why biometrics don’t work later). It was subject to RF interference. To cope with the G-shocks, it was a mere .22LR, a round generally considered inadequate for defense, because anything more powerful was going to destroy the electronics. And it still failed in testing anywhere from 10% to 20% of the time. In no test I read did anyone successfully fire an entire magazine without a failure.

One advantage the Armatix had over most prototypes I’ve seen was the lack of bulk in the handgun. It was compact, while the usual collection of “smart” gun sensors, processor, interlock, and batteries makes concealable handguns not-so-concealable. Armatix got around that by putting much of the hardware in a bulky, ugly watch on the user’s wrist. But the hardware has to go somewhere.

So you want a fingerprint keyed firearm, just like your smart phone. Sadly, those — the tech varies, so the fail modes do as well — don’t work so well when it’s cold out, or if your hand is sweaty. Or if you don’t have time to carefully slide your finger over the scanner. Or if you’re wearing shooting gloves. And it’s still electronic, so see the above caveats.

Other biometric systems that have been tried in the real world, and in fiction, have included wrist tendon sensing (but you have to grip your weapon exactly the same way every time; that takes practice), palm prints (all the same problems as fingerprints), grip pattern, and even voice printing: Lost In Space; “Enable gun for all users.” Now imagine voice printing under stress, in the noisy environment of a gun fight. Have you ever used a voice recognition system word processor? Good luck unlocking your handgun.

Wait…have I mentioned the batteries these things require? Show of hands: whose smart phone has gone dead in the cold? In a gunfight, you do not want to get a “CHECK BATTERY” message instead of a BANG!

One sort-of “smart” system has been around for some time: Magna-Trigger. No batteries, no electronics. It’s a magnetic ring worn on the finger that disables an interlock inside the handgun. Some people swore by them. Others still found it a failure mode, because the ring has to remain properly positioned even during recoil. Or the gun doesn’t go bang again. It also requires custom — read: expensive — gunsmithing. We’re back to 2A-only-for-rich again. 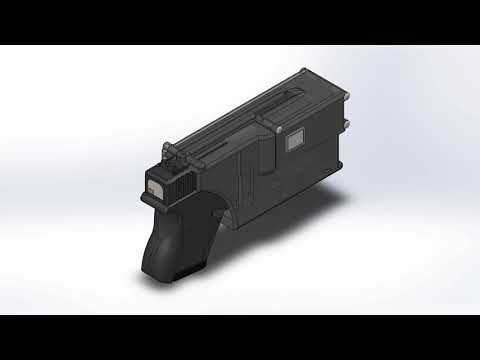 Another electronic system is being developed that also bypasses some of the firing stresses. A “smart” holster. While it will still need to handle ambient environmental conditions, I think it holds a lot more promise than smart guns, if for no other other reason than that a holster can be larger than a usable handgun.

What exactly is the smart gun protecting against?

From the gun control side of the argument, we typically hear that “smart” guns will protect owners from having their sidearm snatched and used against them, keep children from firing it accidentally, and prevent criminals from using it if it’s stolen in a burglary. All things to all people.

Assuming you’ve come up with a workable “smart” gun, it might help with a snatch & shoot scenario. Unless you’ve based it on a Galaxy S10 fingerprint reader, which will accept anyone’s fingerprint (oopsie…biometrics are hard).

Such a working system might help with small children grabbing an unattended gun and shooting themselves. But putting the darned gun away is cheaper and more effective. Based on complacency I’ve seen with other alleged security systems, I would expect to see idiots placing full faith in the “smart” gun, and failing in basic firearms handling.

What a smart gun cannot help with is the stolen-and-used-later scenario. A gun safe isn’t any guarantee of that. I’ve seen numerous reports of safes being stolen and found later… torched, cut, or bashed open.

No “smart” gun can be designed to work against someone stealing a gun, who now has hours/days/weeks to figure out how to disable the sucurity features. In the case of the iP1, it was someone fiddling with a magnet who discovered how to instantly bypass the safety. With some gun safes, it was nothing but the foil wrapper from a stick of chewing gum.

Come the day that someone manages to build a useful, reliable, and affordable “smart” gun, I’ll be interested. But the limits of existing technology presently make “useful” and “affordable” incompatible.