A history of candy corn.

Candy corn either you like it or hate it.

Halloween provides a cavalcade of whimsical scares for children and adults alike, but nothing chills the bones quite as much as the piles of candy corn left at the bottom of pumpkins and pillowcases across America.

A 2010 market research survey found that candy corn was in fact the least popular Halloween candy of all those polled. Despite being the consolation prize of confections, candy corn is a ubiquitous part of Halloween and continues to sell billions of kernels each year. The waxy little treat may not be loved, but its relentless domination of an otherwise pleasant night of ghouls and sexy nurses is over one hundred years in the making.

No one is sure who invented candy corn, but it may have started like this. (photograph by Anna Fox)

The true creator of candy corn is a mystery lost to time, but the first reports of the multi-colored sugar drops began in the 1880s when the candy began appearing during the Halloween season. Soon after the candy’s sporadic appearance throughout the states, the Wunderle Candy Company began mass-producing the treat under the name, “Chicken Feed.” In 1898, the homespun recipe for the candy had been adopted by the Goelitz Candy Company who quickly eclipsed Wunderle as the primary purveyor of the faux corn. Despite the sudden adoption by large candy conglomerates, the process for creating candy corn remained remarkably labor intensive. After mixing a cavity cocktail of sugar, corn syrup, fondant, marshmallow, and water, the slurry would be dyed one of the three candy corn hues: orange, yellow, or white. Laborers would then take 45-pound buckets of the hot liquid candy and pour it into long rows of trays of kernel forms, making three passes, one for each color of the corn. Once this back-breaking work was complete, the molds would cool and candy corn was unleashed upon an autumnal population. 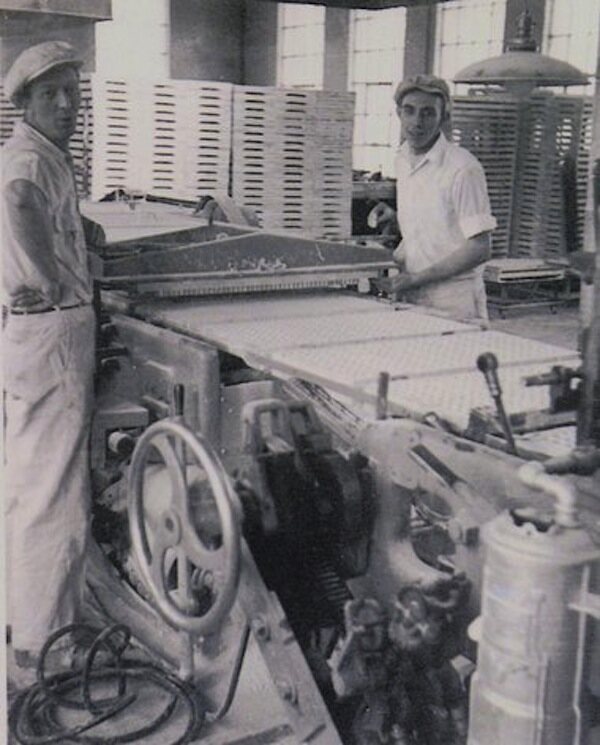 This candy corn factory burnt down in 1950 when the slurry vat burst into flames. (via nj.com)

The agrarian America of the late 19th century embraced the sweet little treats that recalled the season’s harvest time roots and farm-fed lifestyle. In fact, candy corn became so popular during the candy season that confectioners even experimented with other vegetable-formed candies such as candy pumpkins and turnips (the horror…). Due to the slow, laborious candy creation process of the time, treats such as candy corn were only made from March to November, so the tide of candy corn would only wash across the nation around the time of Halloween, hence the inextricable link between the holiday and the candy. 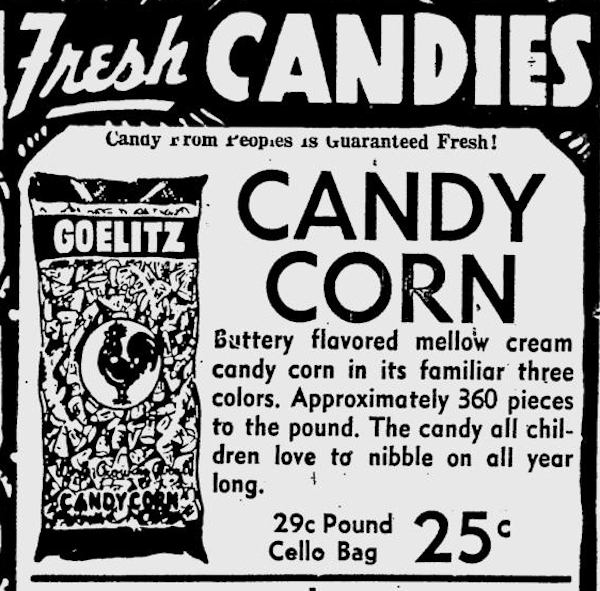 Candy corn remained a stalwart product for companies through the 20th century as candy trends came and went. The simple recipe for the candy has been unchanged throughout, although the strongmen with the buckets of sugar were eventually replaced by industrial machines which now heartlessly crank out “All Hallows’ Tears” year-round. Breaking its bond to Halloween, candy corn is now produced for a number of holidays in a rainbow of abominations such as the red and green “reindeer corn,” or the pastel “rabbit corn.” But no matter the coloration, the recipe remains the same, and the chalky sweetness of its frontier roots will continue to haunt candy bowls long after all other treats have gone.