It is time for Kamala Harris to exit the 2020 DemocRat Clown Call.

Harris campaign manager Juan Rodriguez announced the “organizational realignment” in a memo to campaign staff. Rodriguez and other campaign consultants will take a pay cut, existing contracts will be renegotiated at lower rates, and campaign staff at the Baltimore headquarters will be reduced and redeployed to Iowa. The campaign intends to use the extra cash to execute a “minimum 7-figure paid media campaign” in the Hawkeye State ahead of the caucus in February. 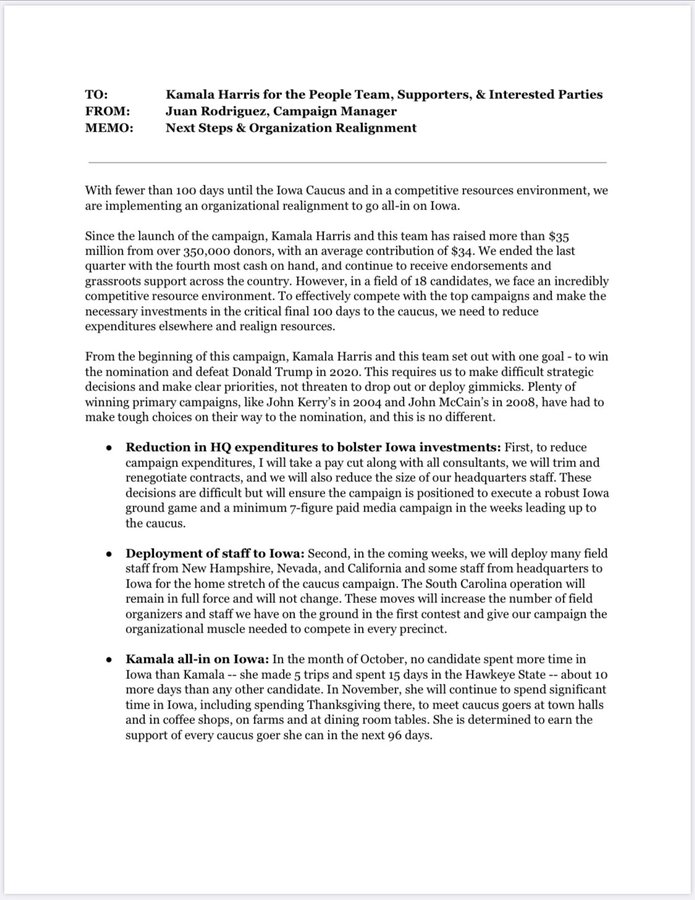 83 people are talking about this

The announcement suggests that the self-proclaimed “top-tier candidate” will not be able to remain in the primary race much longer, a development that could potentially pave the way for an experienced veteran such as Hillary Clinton to make a late entry into the 2020 Democratic field.

Harris received just 3 percent in the most recent USA Today/Suffolk poll, after polling as high as 20 percent in late June. Hers is one of the most epic campaign meltdowns in recent memory, as she currently trails Rep. Tulsi Gabbard (D., Hawaii), the candidate she once mocked for her insignificant poll numbers. Gabbard, meanwhile, remains resilient despite Clinton’s baseless accusation that she is a Russian asset.

In an interview with Politico, one Democratic donor who contributed the maximum legal amount to Harris’s campaign expressed frustration with the candidate. “She’s from fucking California. The idea that you don’t have support of high-dollar donors doesn’t make any sense,” the donor said. “I blame her.”

Harris press secretary Ian Sams, who previously worked on Hillary Clinton’s failed presidential campaign in 2016, did not return a request for comment on the cutbacks. Sams suffered a hysterical meltdown following the most recent Democratic primary debate in Ohio, accusing BuzzFeed editor Katherine Miller of exhibiting “whiteness manifest” after she offered a critical take on Harris’s debate performance. Sams complained in a text message to Miller’s male boss, Ben Smith, who replied: “Do you seriously not have real problems? This text makes me think you are totally, totally unready for an actual presidential campaign.”