I knew Little Bobby Francis O’Rourke was lame but until I read this story I did not realize just how lame he is.

It makes even Jeb! and his ‘please clap’ moment looks like the Beatles by comparison.

When would true ‘grassroots’ fans need a script for something?

Ok, there are some niche events where a page of instructions might be necessary — people who still go to screenings of Rocky Horror Picture Show, for example, wanting the ‘authentic experience’ might bring one just so they don’t miss any cues to throw toast, confetti or whatever

But true fans? True fans don’t NEED to be told how to respond to someone that truly energizes them. Go to any Olympic event, and you’ll know an American athlete is competing from the rousing chants of U-S-A! The same is true of a Trump rally, come to think of it, when some protester tries to crash the party.

In 2016, the issues drove the rally chants. ‘Lock her up’ and ‘Build the wall’ both figured prominently. And it wasn’t Trump leading the chants, either.

But now that he’s bowed out, we’ve discovered that the Beto rallies were as empty as his support. The Vanilla Obama, supposedly so ready to knock off Senator Ted Cruz, and who had ‘Man, I’m just born to be in it’ splashed across a Vanity Fair cover to announce his Presidential Race was all hat and no cattle. Just a has-been trying to seem relevant on a skateboard.

We knew all of that before he ever quit. But what we didn’t know was just how pathetic his few followers really were. They weren’t even proper lemmings. At least lemmings can follow the crowd without instructions.

His ‘followers’ were given instructions on HOW to cheer for him.

Even Jeb! would know that is pathetic. And he knows a thing or two about being pathetic in front of an audience.

Beto “cheer guides” found after his rally. How pathetic can this guy be? He’s literally coaching his audience on what to chant. America’s biggest loser! 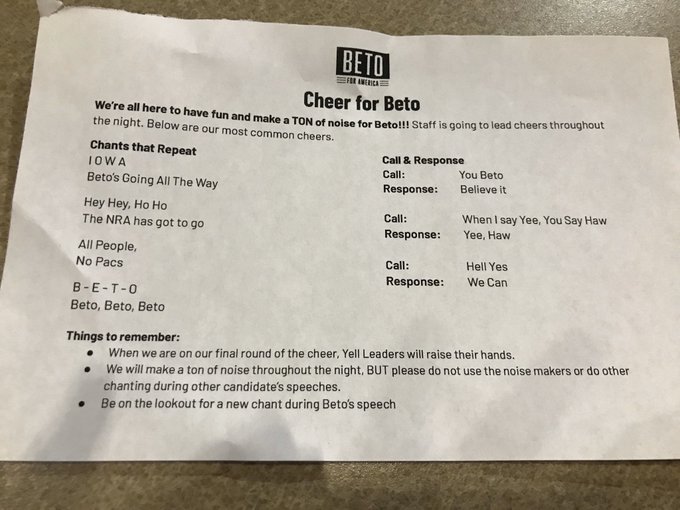 4,528 people are talking about this

It’s sad, really. But it really DOES get worse once you read the cheers themselves. 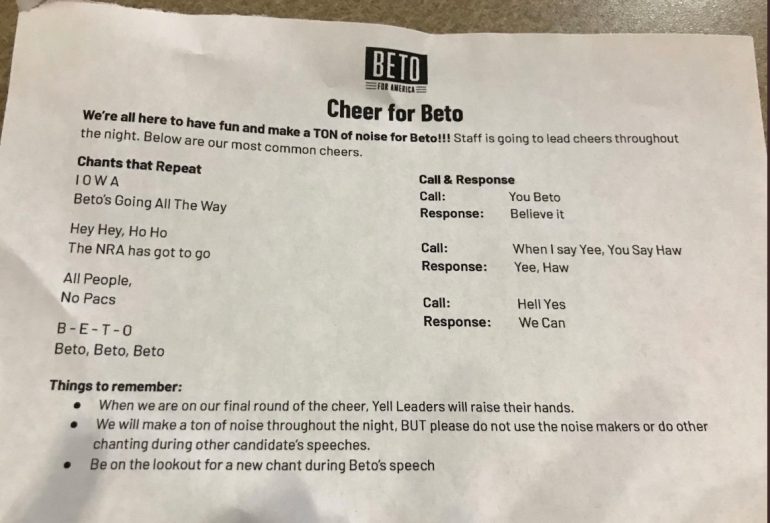 Stop and think for a moment that someone actually CLEARED these cheers for use. These are the ones that got a thumbs up from some kind of an organizer.

Hard to imagine which of them are the most cringe-inducing.

Call: You Beto // Response:  believe it

Hell yes we can

That last one needs tweaking. How about… ‘Like Hell he can!’

It’s almost disappointing to see him drop out so early, isn’t it? He’s barely scratched the surface of his full loser-ly potential.

Not to worry, I’m sure he’ll be back in the spotlight again. The glutton for punishment can’t help himself.