The American Volunteer Group Flying Tigers was recruited under President Roosevelt before the Pearl Harbor attack dragged the USA into the Second World War in order to help defend China from Imperial Japanese forces.

Twenty-year-old Frank Losonsky from Detroit, Michigan, was one of over three-hundred military personnel who volunteered for the overseas posting in 1941.

Remuneration was good but the catch was that Frank had to leave US service in order to qualify before being sent to Kunming.

Under the command of Claire Lee Chennault of the Chines Air Force, the American P40-B aircraft were painted with Chinese colours but were essentially all-USA assets.

Three squadrons of thirty aircraft trained in Burma before the outbreak of War. Losonsky was part of the support crew and became a crew chief with the Hells Angels, maintaining three to four aircraft  sourcing salvage parts and delivering bombs.

They made their first combat engagement twelve days after the Pearl Harbour attack on December 20th, 1941 and fared so well that their exploits soon became legend.

In all the squadrons received credit for destroying 296 Japanese aircraft while losing just fourteen of their own pilots.

The kill ratio was substantially higher than their contemporaries fighting in Malaya, the Philippines and other locations around the Pacific theatre.

The credit for this was attributed to Chennault’s radical philosophy regarding air combat. He spent time observing Russian and Japanese Air Force tactics and equipment and then analysed the strengths and weaknesses he observed in his own squadrons.

This way he maintained the combat ready capability of the Flying Tigers at approximately sixty flyers.

Chennault’s rule was that pilots should take on the enemy in small groups and from above, as the P-40s were not as manoeuvrable as the Japanese fighters.

Dive-and-zoom attacks had been used successfully by the Russians but ran contrary to the training the American pilots were used to. Nonetheless this tactic was proved effective time and time again.

The Flying Tiger’s first mission was to intercept ten unescorted Kawasaki Ki-48 bombers. Three were shot down and a fourth crashed before it could make it home. 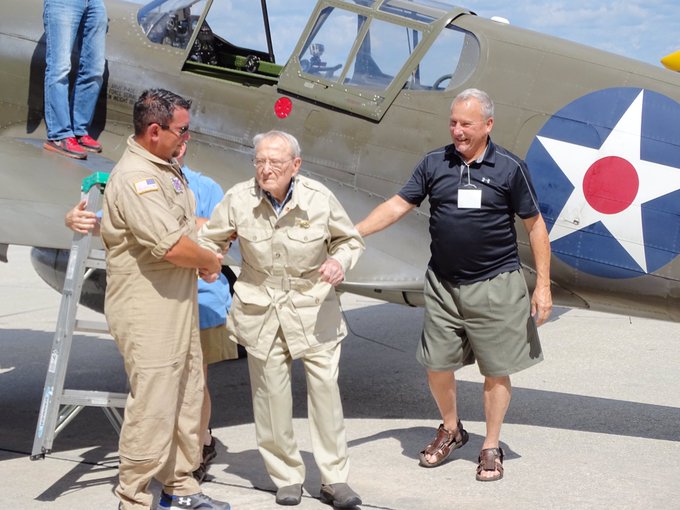 29 people are talking about this

Communication intercepts confirmed that just one Ki-48 bomber made it back to Hanoi. The bombs, destined for Kunming, were jettisoned and raids on the city came to an end for the duration of the AVG Flying Tiger’s residency.

It was one of the first military successes of the Pacific War for the USA. The following year, the day the Flying Tigers were disbanded, July 4th, 1942 the Group destroyed four Japanese Ki-27s and incurred no loss to themselves.

The AVG Flying Tigers were officially renamed the 23rd Fighter Group of the US Air Force, which was then taken into the 14th Air Force commanded by General Chennault.

The group went on to further successes and retained the famous nose-art, the shark-mouth and flying tiger decal designed by the Walt Disney company, on the Curtiss P-40 Warhawks.

Not everyone went on to serve in the US military, some decided to remain in China, others, like Frank Losonsky, had to make their own way back around the world.

Losonsky travelled through Asia and South Africa before making his way back to the USA where he met and married his wife.

He then returned to China to work for the state airline helping to circumvent the Japanese blockade of the Burma Road.

Supplies had to be flown from China to India over the Himalayan Mountain Range, otherwise known as ‘the hump’.

When the war finally came to an end Frank Losonsky took a mechanic’s job with the Burmese Trans-Asiatic Airlines where he trained to fly, becoming a pilot.

One thought on “We Lose Frank Losonsky, Last of the AVG Flying Tigers Aged 99”