Lost in all the Super Tuesday coverage this week was a significant political victory for the Second Amendment, courtesy of a non-politician outsider in North Carolina who has gained national prominence in recent years for his passionate defense of our right to keep and bear arms.

That man would be Mark Robinson, a former factory worker and day care operator from Greensboro, North Carolina, who just won the Republican nomination to be the next lieutenant governor of the state, according to The Associated Press.

Robinson was one of several Republican candidates for the nomination; virtually all the rest were seasoned politicians with past electoral victories to their credit.

Despite having no prior political experience, however, Robinson garnered a plurality of votes to avoid a run-off and win the primary contest outright.

What likely helped push Robinson over the top in terms of support among voters was his impassioned defense of gun rights during a Greensboro city council meeting in April 2018 that went viral and gained Robinson national recognition among the Second Amendment-supporting community.

His four-minute speech was delivered in response to a knee-jerk attempt by the city council to forward all proceeds from an upcoming gun show to a gun control group, a ludicrous attempt at a compromise after the anti-gun mayor had suggested the gun show be banned outright in the wake of the Parkland, Florida, school shooting.

After introducing himself to begin his speech, Robinson directly addressed the council members and said, “When are you all going to start standing up for the majority, and here’s who the majority is: I’m the majority.”

“But it seems like every time we have one of these shootings, nobody wants to put the blame where it goes, which is at the shooter’s feet. You want to put it at my feet.

Calling the demonization of law-abiding gun owners “ridiculous,” Robinson said, “It does not make any sense. The law-abiding citizens of this community and many communities around this country — we’re the first ones taxed and the last ones considered and the first ones punished when things like this happen.”

“Because our rights are the ones that are being taken away. That’s the reason why I came out here today, gun show or no gun show, NRA or no NRA,” he said. “I’m here to stand up for the law-abiding citizens of this community.”

Congratulations to Mark Robinson for winning the primary for Lt. Governor. @markrobinsonNC 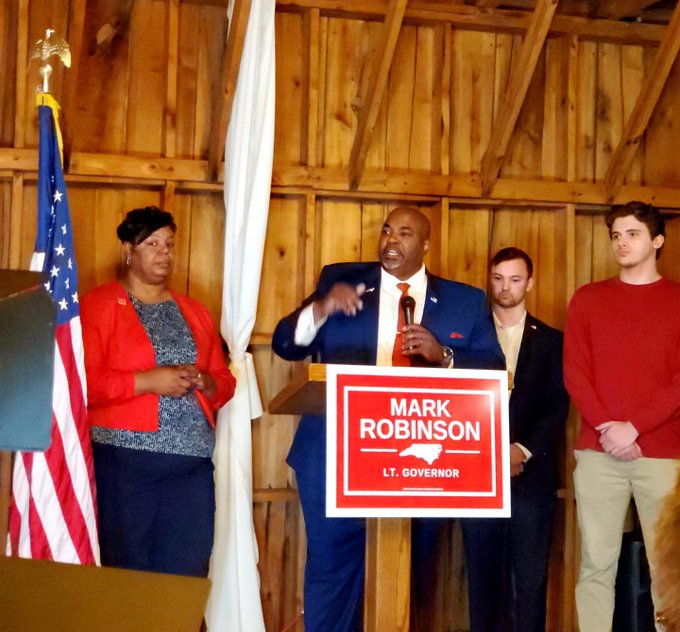 21 people are talking about this

Robinson went on to suggest that even if lawful gun owners complied with confiscatory gun control laws and turned in all of their legally owned weapons, the criminals would not do so and would remain armed.

He further wondered how the police — who, as he pointed out, had been “demonized,” “criminalized” and “vilified” on top of being undermanned and overworked — would be able to do anything to disarm the criminals who retained their weapons.

“And when I say fight I don’t mean shots fired, I don’t mean fists thrown,” he clarified. “I mean I’m going to come down here to this city council and raise hell, just like these loonies from the left do, until you listen to the majority of the people in this city, and I am the majority.”

“The bottom line is, when that Second Amendment was written, whether the Framers liked it or not, they wrote it for everybody.

Robinson’s speech vaulted him toward the forefront of the gun rights community, and now, following his unexpected primary victory in the lieutenant governor’s race, he has the chance to take his fight to protect the right to keep and bear arms far beyond the city council-level to the entire state.

First things first, though, as Robinson must now defeat his Democratic opponent — who won’t be chosen until a run-off election is held in May — during the general election in November. Rest assured, he has my support as well as that of every other law-abiding gun owner in North Carolina and across the nation.