I do not see this happening.

A CNN pundit is reviving a conspiracy theory that President Donald Trump is just waiting for the right time to dump Vice President Mike Pence and replace him with former South Carolina Gov. Nikki Haley.

During an appearance at the American Israel Public Affairs Committee’s conference on Monday, CNN contributor Paul Begala, when asked as part of a roundtable discussion to make a bold prediction, let loose.

“This is not a prediction. It’s a certainty,” he said.

“On Thursday, July 16 — that’s the date the Democrat gives her or his acceptance address — on that day, to interrupt that narrative, Donald Trump will call a press conference at Mar-a-Lago. He’s going to dump Mike Pence and put Nikki Haley on the ticket to try to get those suburban moms,” Begala, a strategist with former President Bill Clinton’s 1992 campaign, predicted.

“You watch. Guaranteed. Trump put Pence in charge of coronavirus to throw him under the bus,” he said, referring to Pence’s hot-button role as the head of the federal task force responsible for the response to the coronavirus.

(I like Paul Begala, but we have to put the brakes on guessing and spreading rumors..if he has facts, great..but it appears he has none) “CNN’s Begala: Trump will ‘dump Pence’ for Haley on day of Democratic nominee’s acceptance speech https://thehill.com/homenews/media/485562-cnns-begala-trump-will-dump-pence-for-haley-on-day-of-democratic-nominees#.Xl6-27kuGdM.twitter …

CNN’s Begala: Trump will ‘dump Pence’ for Haley on day of Democratic

202 people are talking about this

That’d be the worst decision of his Presidency. 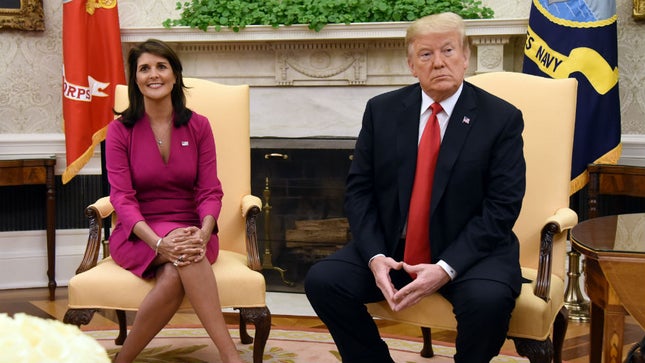 I doubt it. There haven’t been any real significant indicators that point to Trump dumping Pence. Besides, when was the last time Paul Begala of all people was right about anything pertaining to politics?

CNN’s Begala: Trump will ‘dump Pence’ for Haley on day of Democratic nominee’s acceptance speech https://thehill.com/homenews/media/485562-cnns-begala-trump-will-dump-pence-for-haley-on-day-of-democratic-nominees#.Xl2tYY7w9DA.twitter … >> Vice President Pence has been an incredible Vice President – and my guess is he will be rewarded for his outstanding performance by GOP base.Not MSM hacks

CNN’s Begala: Trump will ‘dump Pence’ for Haley on day of Democratic

74 people are talking about this

Speculation that Haley might replace Pence, or that the two are waging a shadowy duel over the GOP presidential nomination in 2024, has been wafting around political circles for months ever since Haley stepped down as the ambassador to the United Nations.

Haley has denied she wants to elbow Pence out of the way, and Trump has said he fully supports Pence.

But despite everyone saying all the expected things, the notion raised by Begala intrigued CNN analyst Chris Cillizza, who wrote in an Op-Ed on CNN that it probably will never happen, but remains at the outer levels of possible.

Begala is “absolutely right that Trump is, at heart, a showman and provocateur. And that Trump likes nothing more than drawing attention away from his opponents to ensure the spotlight is shining on him. And that if Trump likes anything more than being the center of attention, it’s freaking out the squares — doing something wildly unpredictable that no one saw coming.”

Cillizza said that if “Trump believed the only path he had to victory was to jettison Pence for Haley, he would think very seriously about doing it. But even with all that said, it’s still a verrrry long shot. Like very long.”

Dropping a vice president that late in the campaign sends a bad message, he wrote.

“Trump cares deeply about perception. And projecting an image of utter certainty and strength.”

“A last-minute swap-out of your vice president because you think you can’t win without someone new is the exact opposite of that message. It suggests weakness and, even worse, panic,” he said.

But Cillizza added on a final note, “When Donald Trump won in 2016, I pledged to say never say ‘never’ again in politics.”

“So I won’t say the Haley-for-Pence move will never happen. Just that it is very, very, very unlikely.”