A campaign promise made and a promise kept.

Securing the border and deporting illegals.

The Trump administration has executed an astounding turnaround at the southern border, with the number of illegal immigrants being deported now surpassing the total being apprehended trying to cross illegally into the U.S. each month.

“This president’s strategy has given us more tools in our toolbox than we’ve ever had,” Morgan said. “For the last five months, we’ve actually been removing more illegal aliens than we’ve been apprehending.”

Morgan tweeted a chart on Thursday showing over the past five months that approximately 14,000 more unlawful aliens were deported or returned than arrived.

For the last 5 months, we are removing and returning more illegal migrants than those apprehended! We are also more effective and efficient at doing so, applying a consequence or pathway to 95% of those we apprehend. This is a game changer. 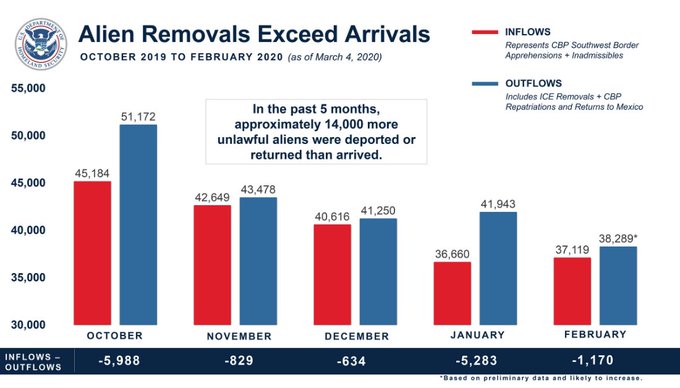 In a Thursday news release, Customs and Border Protection reported it conducted 37,119 total enforcement actions in February 2020, including 30,068 apprehensions and 7,051 inadmissibility decisions.

CBP said February’s number of apprehensions represented a 74 percent decrease from the peak of the border crisis in May 2019.

The agency further noted there has been a shift in apprehensions away from family units, who were coming primarily from Central America, to single adult Mexicans and unaccompanied minors.

“The processing pathways and repatriation initiatives which have been implemented by the administration have had a profound effect on CBP’s ability to gain operational control of our borders,” said Border Patrol Chief Rodney Scott.

“The Journey is Futile message is resonating with family units, which are at their lowest point since April of 2018. We will continue to utilize every available resource to secure the borders of the United States and keep our communities safe.”

Morgan pointed out in a Thursday tweet that while February saw a slight uptick of 1.3 percent in total apprehensions at the border, that was down significantly from the 30 percent increase from January to February in 2019.

There were 76,545 apprehensions in February last year.

For the 9th straight month in a row, we continue to make incredible progress strengthening our Southwest border to address the threats we face, specifically the flow of illegal immigration. 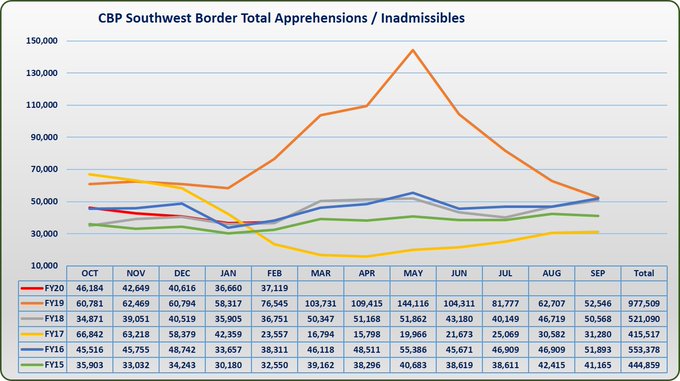 56 people are talking about this

Trump addressed the topic of border security at a town hall in Pennsylvania on Thursday, which aired on Fox News, giving credit to Mexico for also stepping up to help.

“We have right now 27,000 Mexican soldiers on our border, saying that if they don’t do that, we’re going to have to be very tough on Mexico,” Trump said.

The president tweeted in June that Mexico signed an agreement to assist in stemming the flow of migrants in exchange for the U.S. not imposing tariffs.

I am pleased to inform you that The United States of America has reached a signed agreement with Mexico. The Tariffs scheduled to be implemented by the U.S. on Monday, against Mexico, are hereby indefinitely suspended. Mexico, in turn, has agreed to take strong measures to….

….stem the tide of Migration through Mexico, and to our Southern Border. This is being done to greatly reduce, or eliminate, Illegal Immigration coming from Mexico and into the United States. Details of the agreement will be released shortly by the State Department. Thank you!

53.9K people are talking about this

The president anticipates having 500 miles of wall by the beginning of next year.

Additionally, the administration has required those seeking asylum in the United States to apply in a “safe third country” and remain in Mexico while their claim is processed.

The 9th U.S. Circuit Court of Appeals has put this policy in jeopardy, however, with a Wednesday ruling stating the administration can no longer enforce it in California and Arizona, NPR reported.

The court delayed its order taking effect until March 12 to see “if the Supreme Court has not in the meantime acted to reverse or otherwise modify our decision.”

All the president’s policies taken together have been having their desired effect.

Trump famously ran on building a southern border wall and addressing the flow of illegal immigrants and illicit drugs into the United States.

Despite practically no help from Democrats in Congress, and continuous court battles, he is achieving those goals.