As the old adage goes “Experience is the best teacher.”

We’ve been in contact with a number of retailers around the country today and over the weekend and they report that the Great Coronavirus Gun Run is anything but fake news. Nine millimeter and .22 LR ammunition is evaporating at a rapid pace. A large Washington state retailer sold $120,000 of ammo in the first three hours they were open on Saturday.

A northern Illinois retailer that’s been in business since the mid 1950’s said they did twice the amount of business they’d ever done before in a single day, even during the post-Sandy Hook buying binge. They’re completely sold out of personal defense ammunition and range loads are getting awfully scarce. They’re all out of AR pattern rifles and the remaining handgun inventory is going fast.

According a central Florida retailer we talked to, gun buyers were waiting as long as four hours for an all clear on their NICS background checks Saturday. They’re seeing about 50% of their Gun Run sales volume going to new buyers with most of the rest being bought by CCW holders who are able to bypass the state’s 3-day waiting period (5 days in many of south Florida’s blue-er counties).

March For Our Lives

“In Indiana, it’s just as easy to buy a gun as it is to rent a public bike.” – @KobeyLofton on gun trafficking in Chicago 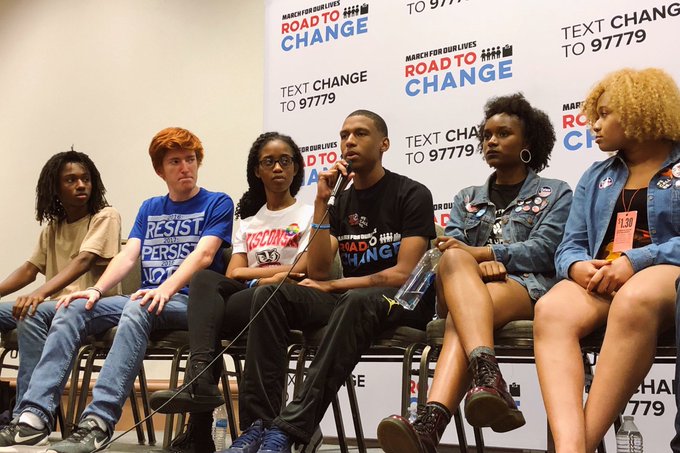 247 people are talking about this

As the Florida gun store owner told us, during this national emergency, “guns and ammo are like toilet paper for smart people.”

Note that in the video Spartan reports that background checks are taking 1.5 to 2 DAYS to clear right now, so no one (other than concealed carry permit holders) is walking out with their new firearms.

The Illinois gun dealer we talked to isn’t seeing as many first-time buyers, but that’s because you can’t just walk in and buy a firearm in the Land of Lincoln. You first need permission from the state via a Firearm Owner’s ID Card, a process that takes a minimum of 60 days.

Do you live in Illinois and you’re worried about your family, but never thought about buying a gun until now? Fill out the form and keep your mouth shut. The Illinois State Police will get around to it. Eventually.

Wait! What about all those politicians who’ve been saying that anyone can buy a gun? All you need is a computer! You can just order one online!

Guns shouldn’t be a click away for any domestic terrorist with a laptop. The new executive action I announced this week will help close the online sales loophole. As president, I will act to keep guns out of the wrong hands.

14K people are talking about this

As we and anyone with even a passing familiarity with the law has been saying all along, that was always a steaming pile of anti-gun horse manure cooked up to justify the push to restrict more Americans’ gun rights.

The universal background check bill is a no-brainer. Today, huge loopholes allow anyone, including terrorists and felons, to buy guns at gun shows or online. This bill will help save lives, but Senate Republicans are stopping it from becoming law. #BackgroundChecksSaveLives

207 people are talking about this

But lots of people evidently bought the agitprop the Civilian Disarmament Industrial Complex was selling. As Andrew Tuohy of Omaha Outdoors reports,