It is a start down the road to reopen America.

For sports fanatics dying to see some competition, there may be some good news on the horizon.

According to Dr. Anthony Fauci, director of the National Institute of Allergy and Infectious Diseases, sporting events could resume within a couple of months.

However, just like an outfielder chasing down a potential home run, there is one agonizing catch: The sports world would likely have to march forward with no fans in attendance, at least for the time being.

“Nobody comes to the stadium. Put them in big hotels wherever you want to play, keep them very well surveiled,” Fauci said in an interview Wednesday on the Snapchat show “Good Luck America.”

“Have them tested, like, every week. Make sure they don’t wind up infecting each other or their family and just let them play the season out,” he told host Peter Hamby. “I mean, people say, ‘Well, you can’t play without spectators.’ Well, I think you’d probably get enough buy-in from people who are dying to see a baseball game.”

Fauci said whether or not we have sports again soon will depend on how the pandemic progresses over the next few months, as well as the “initiative” of sports team owners.

“It’s really going to depend on what actually evolves over the next couple of months,” Fauci said, according to Hamby’s write-up of his interview in Vanity Fair. “You know, regarding sports, I believe, and I think this is going to be implemented by the initiation and the initiative of the people who own these clubs.”

The doctor went on to suggest that sporting events could return as soon as July 4, a prospect that is sure to excite many sports fans.

“If you could get on television, Major League Baseball, to start July 4. Let’s say, nobody comes to the stadium. You just, you do it,” he said.

Fauci isn’t the only one with good news for the sports world.

According to a readout of the president’s call, industry leaders such as Dallas Mavericks owner Mark Cuban, Dallas Cowboys owner Jerry Jones and New England Patriots owner Robert Kraft participated in the call.

Readout of Trump’s conference call today with US sports leaders, per WH pool. 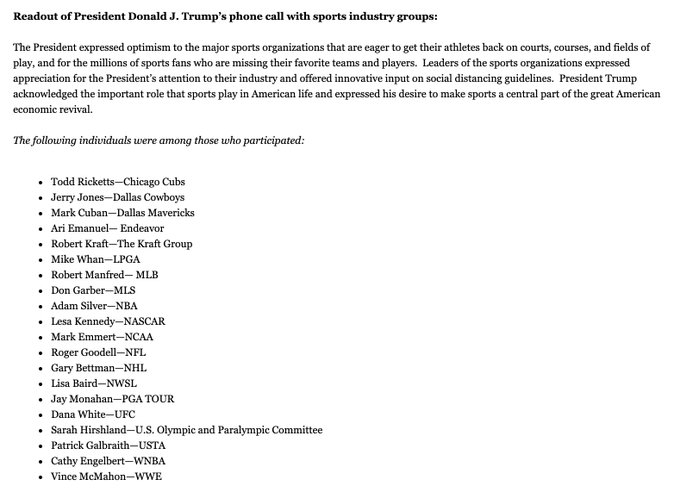 “The President expressed optimism to the major sports organizations that are eager to get their athletes back on courts, courses, and fields of play, and for the millions of sports fans who are missing their favorite teams and players,” the White House said. “Leaders of the sports organizations expressed appreciation for the President’s attention to their industry and offered innovative input on social distancing guidelines.”

At a time when so many Americans are stuck at home with nothing to do, bringing back sporting events could be a huge emotional win for the country.

This good news, combined with the fact that Trump has released guidelines to reopen the nation’s economy in a safe, responsible way, gives American plenty to look forward to.