Now you see why I called CNN the Communist News Network.

As CNN continues its charge to deflect blame for the coronavirus pandemic away from communist China and toward President Donald Trump, the left-leaning network was reduced this week to literally publishing Chinese Communist Party propaganda.

The network published a story Monday with a near-verbatim lede of a Chinese Communist Party news release that praised the Chinese military’s handling of the disease aboard People’s Liberation Army Navy ships.

“A Chinese naval flotilla headed into the Pacific over the weekend, evidence that the People’s Liberation Army Navy has done a much better job controlling coronavirus than the US Navy, according to a story posted on the PLA’s English-language website,” editor Brad Lendon wrote.

The language was bad enough when you consider that CNN sourced a Chinese military website in order to criticize U.S. Navy leadership for its sailors’ contracting a virus China lied about.

But when you look at CNN’s reporting and compare it with its source, a Chinese military news release, the similarities in language are alarming.

“A Chinese naval flotilla led by an aircraft carrier reportedly sailed through the Miyako Strait and headed toward the Pacific Ocean, prompting Chinese military experts to say on Sunday that the fleet demonstrated success in novel coronavirus (COVID-19) epidemic control work,” the release read.

While the CNN article has now been heavily edited, it has been archived in its original state here.

CNN also originally reported that “[t]he report said that the Chinese carrier was carrying out this operation while four US Navy aircraft carriers — the USS Theodore Roosevelt, the USS Ronald Reagan, the USS Carl Vinson and the USS Nimitz — have reported cases of coronavirus, crimping their operations.

“The Roosevelt, now docked in Guam, has been hit the hardest by the virus, with 585 cases among its crew of more than 4,000 people. Almost all of them have been moved ashore on the island and work is going on to disinfect the ship, delaying its ability to deploy.

“The PLA Navy has no such issues, Chinese military experts told the Global Times.”

CNN also published a quote attributed to a Chinese military adviser named Xu Guangyu, who reportedly said, “the Chinese People’s Liberation Army (PLA) has done a great job in the epidemic prevention and control work and COVID-19 epidemic has not had an impact on its deployment and operations.”

According to CNN’s original report, Xu Guangyu added, “[i]t showed that the PLA can dispatch troops stationed anywhere at any time, with the troops always maintaining vigorous combat capabilities. The Chinese people can always count on them.”

The network edited its story, which is now headlined “Chinese state media claims country’s navy is not affected by coronavirus,” but not before it was condemned online for becoming a mouthpiece for communist China.

While CNN accuses the coronavirus briefings of being “propaganda,” they are now actively defending China’s coronavirus response and reprinting literal Chinese propaganda.

CNN is under fire for allegedly publishing “Chinese propaganda” in a report that cites a media outlet controlled by the Chinese government.

10.3K people are talking about this

I’m horrified that CNN published this. Its literally a Chinese propaganda story. “The People’s Liberation Army Navy has done a much better job controlling coronavirus than the US Navy, according to a story posted on the PLA’s English-language website.” https://www.cnn.com/2020/04/13/asia/china-coronavirus-aircraft-carrier-deployment-dp-hnk-intl/index.html …

China’s official military news agency has taken to proclaiming the navy’s operational readiness in the face of the global pandemic, but some observers are skeptical.

5,695 people are talking about this

4,198 people are talking about this 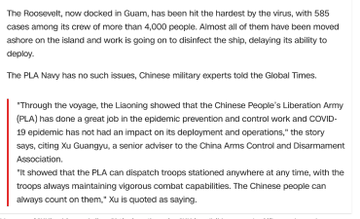 1,030 people are talking about this

CNN or a press release from the Chinese People’s Liberation Army? Spot the difference:

399 people are talking about this

CNN has proven that any foe of Trump’s is its ally in the network’s quest to destroy his presidency and weaponize a pandemic to sour the electorate against him during an election year.

Never mind Tiananmen Square, or China’s oppressive stances toward religious liberty and freedom of speech — or the country’s repressive treatment of women.

CNN’s politicizing of the coronavirus outbreak has now led its reporters to apparently forgive these examples of human rights abuses and side with the country that is the greatest geopolitical foe of not only the U.S., but the entire free world.

CNN has indeed proven itself to be the enemy of the people — and that includes all people who desire freedom and liberty across the globe.