Charlie Daniels is spot on with his observations.

Not just Nancy Pelosi but all DemocRats are out of touch.

It’s not particularly difficult to find ways that Nancy Pelosi is out of touch these days.

For instance, the House speaker’s “let them eat ice cream” moment on James Corden’s late-night show this week was one of the most shockingly ill-conceived attempts at humanizing a politician in quite some time.

As Pelosi showed off her gourmet ice cream collection, Democrats were refusing to budge on giving $250 billion in loans to small business owners unless Republicans caved to their legislative demands. Absent that, she’s more than willing to let the program’s cash reserves run dry.

The current impasse is reminiscent of how the Democrats tried to hold up the third round of stimulus legislation with a prepackaged list of liberal agenda items. In that battle, the Democrats mostly folded — but not before Pelosi managed to get $25 million for the John F. Kennedy Center for the Performing Arts.

There’s a big image problem with that, one which country music legend Charlie Daniels identified in a Thursday tweet.

“Ms Pelosi do you know how many desperate veterans that twenty five million dollars you gave the Kennedy Center could have given a reason for living,” Daniels tweeted. “My guess is you just don’t give a damn.”

Ms Pelosi do you know how many desperate veterans that twenty five million dollars you gave the Kennedy Center could have given a reason for living.
My guess is you just don’t give a damn

10.2K people are talking about this

This received a fair bit of concurrence on Twitter:

Amen Charlie! We have hard working veterans out of jobs can’t feed their families nor do they have a paycheck to pay their mortgage/rent to keep a roof over their heads! Or pay their utilities…Or, or, or

It is a disgrace!

144 people are talking about this

Amen Charlie! We have hard working veterans out of jobs can’t feed their families nor do they have a paycheck to pay their mortgage/rent to keep a roof over their heads! Or pay their utilities…Or, or, or

It is a disgrace!

144 people are talking about this

But she enjoys chocolate.

Pelosi had originally wanted $35 million for the D.C. cultural staple. A draft of the legislation, according to Fox Business, stated that the $25 million allocated for the center in the bill would “cover operating expenses required to ensure the continuity of the John F. Kennedy Center for the Performing Arts and its affiliates. The money is intended to be used for employee compensation and benefits, grants, contracts, rent or utilities, fees for artists or performers, information technology and other administrative expenses.”

I’ve been to the Kennedy Center for the Performing Arts. It’s a nice place.

However, the Kennedy Center should NOT be getting any money in a #coronavirus emergency bill designed to help businesses and families. 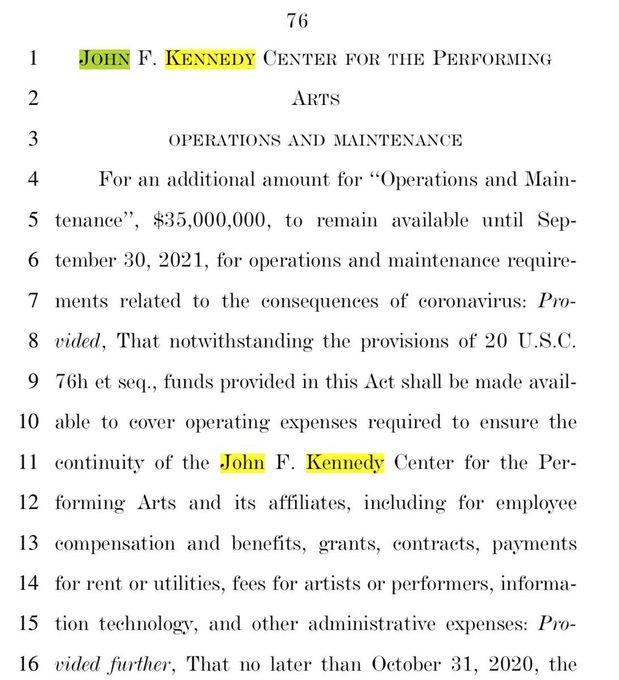 47 people are talking about this

Republicans were generally opposed to the expenditure but quickly became resigned to it. President Donald Trump gave the concession a rather backhanded bit of approval: “The Kennedy Center has suffered greatly,” he said during a media briefing. “I haven’t spent time there because I’m far too busy. I’d love to go there evenings, but I’m too busy doing things.”

The outlay quickly became even more controversial when the Kennedy Center announced that, even in spite of the not insignificant chunk of the stimulus bill being dropped at their feet, they weren’t willing to pay for the National Symphony Orchestra to stay busy doing things.

Right after the bill was signed, the Kennedy Center said it would stop paying the musicians from the orchestra, leading everyone to wonder why it got the money in the first place.

After significant backlash, the center agreed to pay the musicians after all. Sorry about that, everyone. You can look away now.

Not that I’m against musicians being paid, mind you. The Kennedy Center is also a perfectly nice place to go.

All that being said, we didn’t need to spend $25 million on it when our economy has been totally shut down.

What about more funding for veterans services instead? (The Veterans Health Administration received $17.2 billion in the third phase of coronavirus legislation, though I tend to think adding $25 million to that figure is a better use of the money than spending it on the Kennedy Center).

What about using the money to get loans extended to small business in a more timely fashion? What about literally any other use of it?

The Kennedy Center is the giant ice cream-laden freezer of the relief bill.

But don’t worry. All of those laid-off proles have a lot more time on their hands to watch James Corden’s 12:35 a.m. program, where Nancy can show off her collection of frozen creamery.

Nancy, dear Nancy — was there no one to disabuse you of the idea this was remotely acceptable? Did no one in her orbit realize that she was doing this while standing in front of a luxury refrigerator/freezer in an expansive kitchen that, given California property prices, looked like it belonged in the San Francisco residence of the Nizam of Hyderabad?

At a time of desperation in this country, with 22 million already unemployed, Pelosi has become the symbol of Washington insider opulence.

Instead of getting money to small business owners who are going to see their dreams collapse, Pelosi is worried about funneling money to a cultural center that has little to do with getting America back to work safely.