I hope General Flynn sues these bastards that framed him.

Alas, justice has been served. After new documents showed that the Federal Bureau of Investigation plotted to entrap ex-National Security Adviser Michael Flynn on perjury charges, the Department of Justice announced they were dropping the criminal charges against him. It comes after the top prosecutor, a former member of ex-Special Counsel Robert Mueller’s investigative team into Russian collusion, moved to withdraw from the case (via Axios):

Brandon Van Grack, a former member of special counsel Robert Mueller’s team, moved to withdraw from the Justice Department’s prosecution of former national security adviser Michael Flynn on Thursday. He did not provide a reason for his withdrawal.

Why it matters: Van Grack leads a team that has been accused by Flynn’s attorneys of prosecutorial misconduct. New FBI documents stemming from Flynn’s move to withdraw his 2017 guilty plea have amplified conservative claims that prosecutors sought to entrap the former top Trump aide into lying about his conversations with the former Russian ambassador.

The big picture: Attorney General Bill Barr appointed an outside prosecutor in February to examine the case against Flynn, which both President Trump and Vice President Pence have weighed in on in recent days.

#FLYNN docs just unsealed, including handwritten notes 1/24/2017 day of Flynn FBI interview. Transcript: “What is our goal? Truth/Admission or to get him to lie, so we can prosecute him or get him fired?” Read transcript notes, copy original just filed. @CBSNews 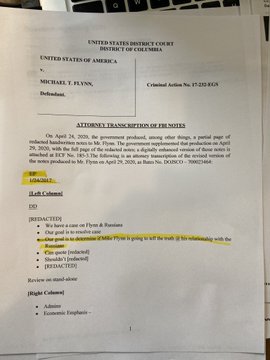 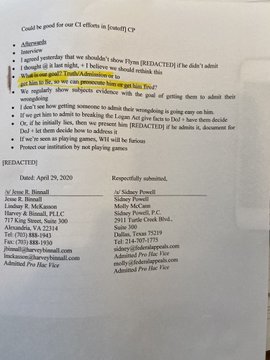 With a new legal team in January, Flynn was moving to withdraw his guilty plea and for good reason. In October of 2019, his lawyer, Sidney Powell, alleged that top DOJ officials plotted against Flynn. After newly released documents showed that, and with Powell saying more damaging evidence against the FBI and DOJ’s witch hunt was coming, it looks like this political circus act is over. Flynn was a victim of the Russian collusion delusion that engulfed the Democratic Party, the liberal media, and their deep state allies. It has come at a terrible price for many (via Associated Press):

8,178 people are talking about this

The Justice Department on Thursday said it is dropping the criminal case against President Donald Trump’s first national security adviser, Michael Flynn, abandoning a prosecution that became a rallying cry for Trump and his supporters in attacking the FBI’s Russia investigation.

The move is a stunning reversal for one of the signature cases brought by special counsel obert Mueller. It comes even though prosecutors for the last three years had maintained that Flynn had lied to the FBI about his conversations with the Russian ambassador in a January 2017 interview. Flynn himself admitted as much, and became a key cooperator for Mueller as he investigated ties between Russia and the 2016 Trump campaign.

In court documents being filed Thursday, the Justice Department said it is dropping the case “after a considered review of all the facts and circumstances of this case, including newly discovered and disclosed information.” The documents were obtained by The Associated Press.

The Justice Department said it had concluded that Flynn’s interview by the FBI was “untethered to, and unjustified by, the FBI’s counterintelligence investigation into Mr. Flynn” and that the interview on January 24, 2017 was “conducted without any legitimate investigative basisthat there was no reason at all for the FBI to interview Flynn.

The point is that there was no reason at all for the FBI to interview Flynn. In fact, when the interview was conducted, the agents said they didn’t think the then-national security adviser did anything wrong. And yet, the FBI decided to go after him because they needed a scalp. It was at a time when the anti-Trump forces in DC and elsewhere were just craving anything to prove that there was Trump-Russia collusion. There wasn’t any. To this day, there is still zero credible evidence proving this conspiracy theory. It’s a liberal media-manufactured myth. Flynn was a victim, as was former Trump campaign adviser Carter Page, who was spied on by the FBI for his supposed role in this farce. Also, for those who remain skeptical of the FBI being an evil-doer here. Let me direct you to Guy’s VIP piece about a 25-year FBI veteran and CNN analyst has changed course on this matter, saying Flynn was railroaded. Also, why the tweaks to the 302 reports (via WSJ):

U.S. Attorney Jeffrey Jensen found much wrong with the Federal Bureau of Investigation’s investigation of Mike Flynn. An aspect that deserves more attention than it has received is the alteration of an FBI agent’s account of the Flynn interview.

For more than half a century, FBI agents conducting interviews have been required to memorialize any information that might become testimony, on a form called the FD-302. It was always considered the interviewing agent’s FD-302. Supervisors never modified it; its purpose was to reflect what the agent observed and heard from the witness or suspect. As an FBI supervisor, I reviewed hundreds of FD-302s. Other than an occasional grammatical correction, I never changed a word.

So it was shocking for me to read the newly released text messages between Peter Strzok, then deputy assistant director of the FBI’s Counterintelligence Division, and Lisa Page. They show that after Mr. Strzok and Agent Joe Pientka interviewed Mr. Flynn, Mr. Strzok heavily edited Mr. Pientka’s FD-302—to the point that he told Ms. Page he was “trying not to completely re-write” it. Even more shocking, Ms. Page, an FBI attorney who wasn’t an agent and wasn’t at the interview, provided edits.

Worse still, the FD-302 that was eventually provided to the court wasn’t that of the agents’ interview of Mr. Flynn. It was instead a FD-302 of an interview of Mr. Strzok, conducted months later, about his recollections of the original interview. Truly bizarre.

Yes, truly. Also, another example of the FBI’s malfeasance and corruption. It’s time to clean house there, but President Trump should consider a full pardon as well.