The hair salon owner should not have been in jail in the first place.

The Supreme Court of Texas ordered the release of Salon Á la Mode owner Shelley Luther Thursday morning. A Texas district court judge ordered her jailed for seven days earlier this week after declaring her to be in contempt of court regarding a Dallas County stay at home order that closed non-essential businesses.

Dallas Attorney Warren Norred filed a writ of habeas corpus on Luther’s behalf with the Texas Supreme Court on Wednesday. On Thursday, he announced on Twitter that the Supreme Court of Texas had ordered Shelley Luther to be released from the jail without bond pending the outcome of future proceedings. 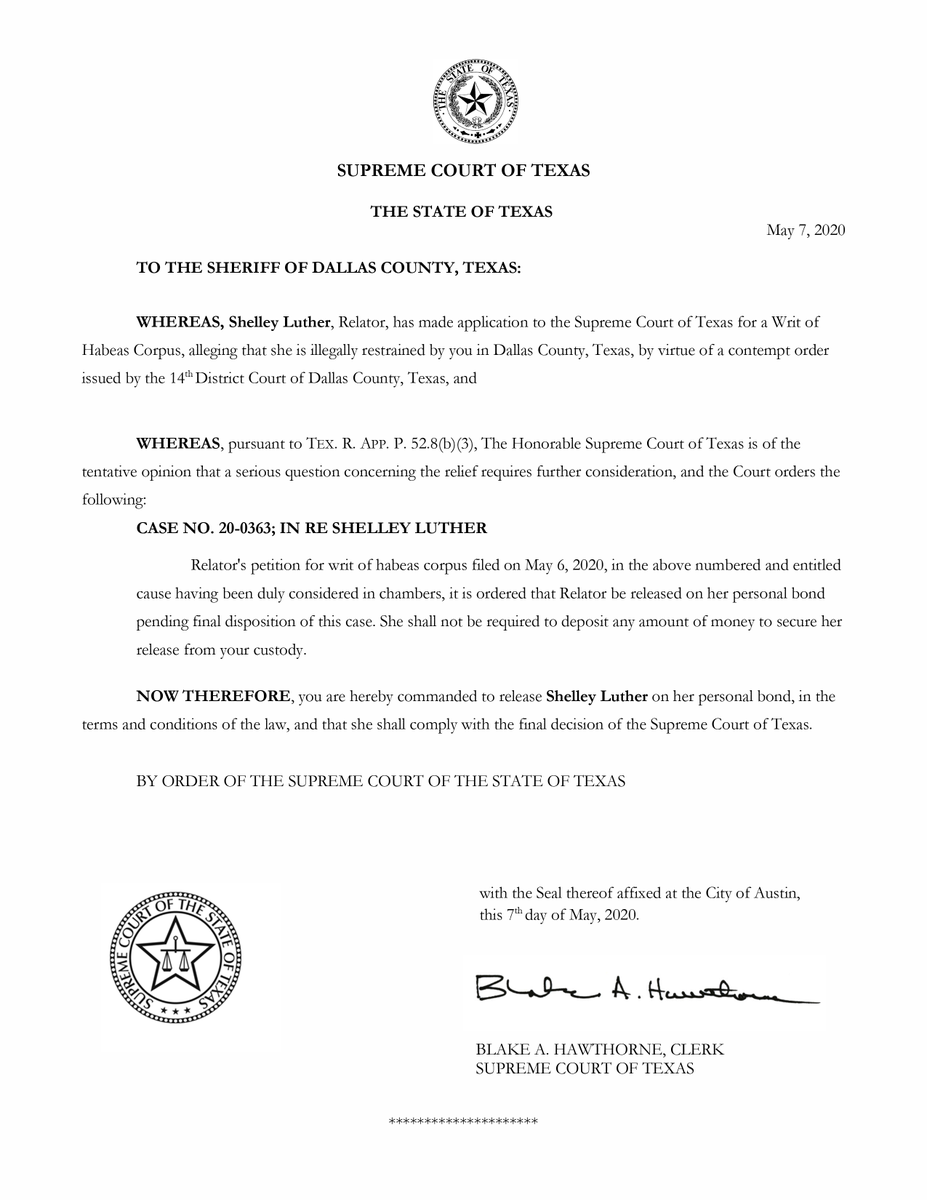 167 people are talking about this

“I find it outrageous and out of touch that during this national pandemic, a judge, in a county that actually released hardened criminals for fear of contracting COVID-19, would jail a mother for operating her hair salon in an attempt to put food on her family’s table,” Attorney General Paxton said in a written statement on Wednesday. “The trial judge did not need to lock up Shelley Luther. His order is a shameful abuse of judicial discretion, which seems like another political stunt in Dallas. He should release Ms. Luther immediately.”

Governor Greg Abbott followed up saying “surely there are less restrictive means to achieving that goal (enforcement of stay home order) other than jailing a Texas mother.”

Judge Moyé said Luther must see the errors of her ways and “understand that the society cannot function where one’s own belief in a concept of liberty permits you to flaunt your disdain for the rulings of duly elected officials.”

“That you owe an apology to the elected officials who you disrespected by flagrantly ignoring, and in one case defiling, their orders you now know obviously apply to you,” Moyé lectured. “That you understand that the proper way in which an ordered society to engage concerns that you might have had is to hire a lawyer and advocate for change an exception or an amendment to laws that you find offensive.”

When she refused to apologize for working to feed her children in her statement, the judge ordered her incarcerated for seven days and fined her $500 per day.