Sadly I do not see this lawsuit going anywhere.

Democrats have said proxy voting, which allows one member to vote on another member’s behalf, is a necessary response to the COVID-19 pandemic.

Republicans argued in opposing the measure when it passed earlier in May that it violates a requirement in the Constitution that a majority of members must be present to vote on legislation, and that proxy voting puts too much power in too few hands.

“This is not simply arcane parliamentary procedure. It is a brazen violation of the Constitution, a dereliction of our duty as elected officials, and would silence the American people’s voice during a crisis,” House Minority Leader Kevin McCarthy of California said in a statement, noting the suit was filed Tuesday in federal court to “overturn Speaker Pelosi’s unconstitutional power grab.”

“Ultimately, as few as 20 members could control the vote of over 220 members under this rule for the foreseeable future. That is not only irresponsible leadership, it is patently unconstitutional, as 230 years of Congressional history and Supreme Court precedent make abundantly clear,” he said.

“It’s simple: one representative should equal one vote. We can’t let her get away with this,” House Minority Whip Steve Scalise added in a tweet.

It’s simple: one representative should equal one vote.

We can’t let her get away with this.

21.7K people are talking about this

Pelosi said the suit was a distraction.

“House Republicans’ sad stunt shows that their only focus is to delay and obstruct urgently-needed action to meet the needs of American workers and families during the coronavirus crisis,” she said in a statement of her own.

“The House’s position that remote voting by proxy during a pandemic is fully consistent with the Constitution is supported by expert legal analyses. Further, the Supreme Court made clear over a century ago that the Constitution empowers each chamber of Congress to set its own procedural rules,” Pelosi said.

The lawsuit, filed in the U.S. District Court for the District of Columbia, said the new proxy voting rules violate tradition and the Constitution.

“In the 231-year existence of the United States Congress, neither the House of Representatives nor the Senate has ever permitted a Member to vote by proxy from the floor of the chamber,” the suit said.

“Through the Civil War; through the burning of the Capitol during the War of 1812 and the terrorist attack on Washington on 9/11; and through the Yellow Fever Epidemic of 1793 and the Spanish Flu Pandemic of 1918, the Congress of the United States has never before flinched from its constitutional duty to assemble at the Nation’s Capital and conduct the People’s business in times of national peril and crisis,” it added. “So it was for more than two centuries. Until now.”

The lawsuit, filed on behalf of McCarthy and other Republicans, said: “It is simply impossible to read the Constitution and overlook its repeated and emphatic requirement that Members of Congress actually assemble in their respective chambers when they vote.”

“The unbroken American tradition of in-person assembly and voting in Congress confirms the unambiguous text of the Constitution: proxy voting by Members of the House of Representatives is unconstitutional.”

The new proxy voting system may be implemented as soon as this week.

Republican congressional candidate Brian Maryott tweeted that if Democratic Rep. Mike Levin, who currently holds the California seat Maryott is seeking, does not want to be present in Congress, voters should heed his wish.

“If Mike is dead-set on allowing someone else to represent our district in Washington, I will volunteer to go in his place, and voters should keep that in mind in November.”#CA49 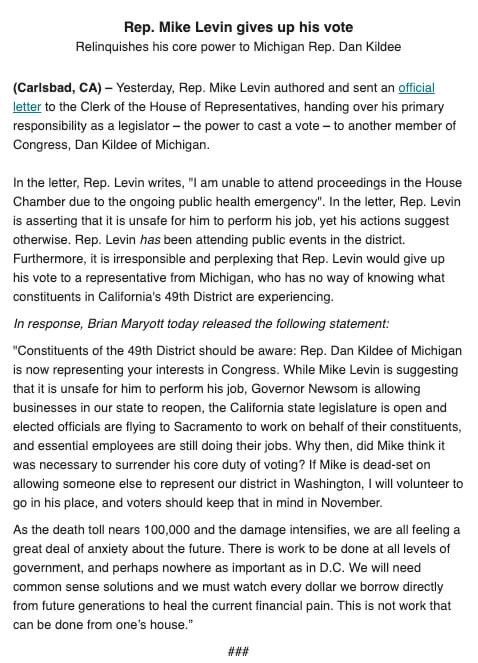 71 people are talking about this

The House’s embrace of proxy voting earned it a jab recently from Senate Majority Leader Mitch McConnell. The Senate has not adopted any rule changes in response to COVID-19.

“At this point, I’m wondering if we should send senators over there to collect their newspaper and water the plants,” the Kentucky Republican said on the Senate floor last week, according to CNN