As Commander In Chief of the military can President Trump override this insane order?

The official said the president told Attorney General Bill Barr that he wanted the National Guard to be armed so that they could protect themselves from rioters and looters coming in to the city, but Esper on his own told the D.C. National Guard leadership to take the weapons of National Guardsmen who were coming in from other states.

“He’s not really on board with what the president is trying to do,” the official said.

The official said Esper also on his own directed the National Guard in D.C. to wear soft caps instead of helmets. Breitbart News queried the Pentagon chief spokesman Jonathan Hoffman on Friday afternoon, but he did not respond by deadline.

Just moments ago, here in DC. Florida National Guard Soldiers from the 53rd Infantry Brigade Combat Team swear in as temporary U.S. Marshals in support of citizens at the Nation’s Capital. 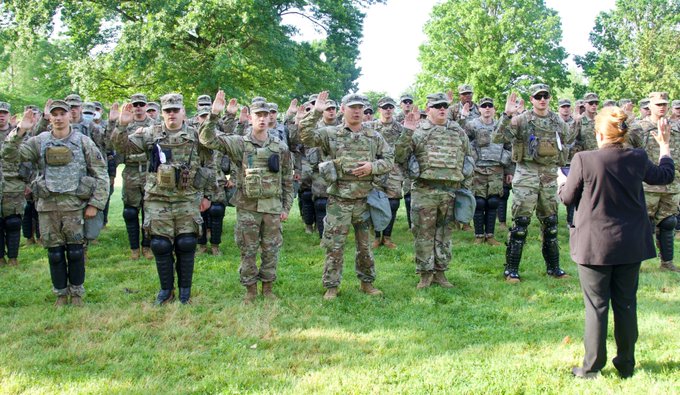 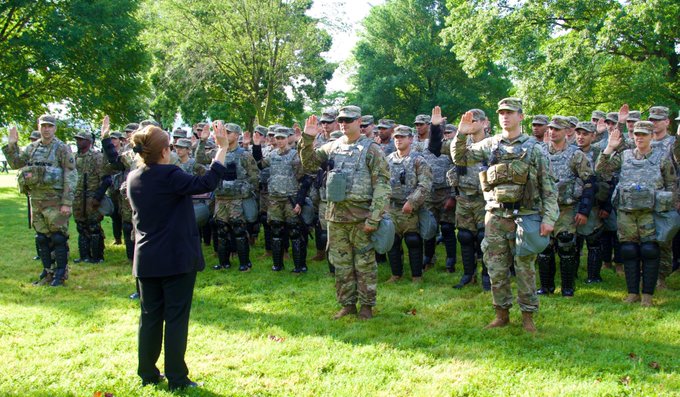 10.7K people are talking about this

The National Guard said in response to a query, “Guardsmen supporting the civil disturbance are unarmed.”

The move comes a day before there are expected to be hundreds of thousands of protesters taking part in demonstrations in Washington, DC, on Saturday.

Protests in recent days have been largely peaceful, but the president had fully-activated the National Guard in D.C. and requested help from other states after several days of looting, defacing national monuments, and the burning of a historic church just one block away from the White House. Dozens of Secret Service agents were also injured. Violence was also engulfing other major cities across the nation.

“Defense Secretary Mark T. Esper made the decision to disarm the guard without consulting the White House, after President Trump ordered a militarized show of force on the streets on the streets of Washington to quell demonstrations that were punctured by an episode of looting Sunday, two senior administration officials said. Trump had encouraged the National Guard to be armed.”

A spokeswoman for Army Secretary Ryan McCarthy said McCarthy “directed” the disarming of the National Guard in D.C., but did not dispute that the order came from Esper.

She said only roughly a dozen in the district were previously armed, and that they carried unloaded weapons with ammunition on their body.

Esper is reportedly on thin ice with Trump after the Pentagon secretary announced during a press conference on Wednesday that he did not support invoking the Insurrection Act, which would allow active-duty forces to act in law enforcement roles.

White House Press Secretary Kayleigh McEnany said that Esper had not consulted the president before making the announcement, to her knowledge. She also said that the president has the “sole” authority to invoke the Insurrection Act.

Trump has reportedly asked advisers whether he should replace Esper. Sen. Tom Cotton’s (R-AR) name has been floated. He has advised the president to use military troops to restore order in cities that have seen riots in response to the death of George Floyd.