The drive-by media has lied about President Trump since before he took office.

So why would they feel any shame about this lie?

Except for watching the local news to get the weather I pulled the plug on the drive-by media.

President Donald Trump’s mention of George Floyd Friday during an impromptu call for equality that took place during a White House event-triggered misleading media reports claiming Trump was talking about Floyd in the context of positive economic numbers.

For example, the New York Daily News headlined its coverage: “Trump says he hopes George Floyd is ‘looking down’ from heaven while touting new job numbers: ‘It’s a great day for him.’”

The website Mediaite covered the event in a similar fashion, writing, “Trump at Jobs Presser: Hopefully George Floyd is ‘Looking Down Right Now Saying This is a Great Thing.’” 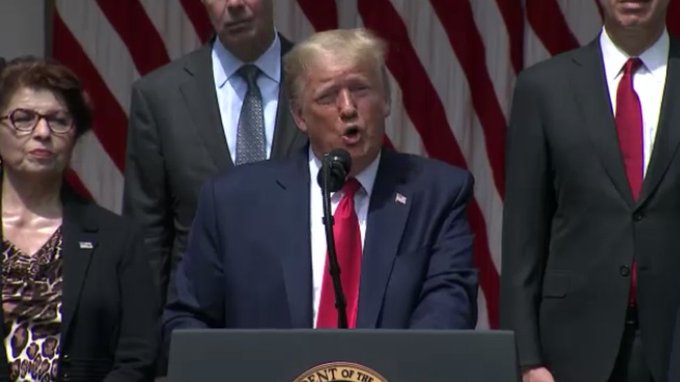 63 people are talking about this

Other media outlets followed the pack.

Trump says he hopes George Floyd ‘looking down’ and seeing today’s jobs numbers as ‘a great day for him’ https://www.independent.co.uk/news/world/americas/us-politics/trump-george-floyd-press-conference-today-job-numbers-a9551426.html …

Donald Trump says he hopes George Floyd, who was killed by police on Memorial Day after an officer forced his knee on the back of his neck for nearly nine minutes while facing the ground in

690 people are talking about this

The reality of Trump’s news conference was different.

Although positive news on the economic front was, in fact, the trigger for the event, Trump — who often improvises during news conferences and speaks about what is on his mind in addition to the topic of the day — covered a number of subjects, including the coronavirus and veterans, as well as talking about Floyd after discussing opportunity zones in inner cities and historically black colleges and universities.

Trump then began to touch on the issue of protests and riots in the aftermath of Floyd’s death.

The president then talked about the need for governors to control the streets of major cities.

“And I really am suggesting because if you look at Minnesota and the great success we had there, and other places, I’m suggesting to some of these governors that are too proud in New York, you see what’s going on there. Don’t be proud, get the job done. You’ll end up looking much better in the end. Call in the national guard, call me. We’ll have so many people, more people than you have to dominate the streets. You can’t let what’s happening happen. It’s called dominate the streets. You can’t let that happen in New York where they’re breaking into stores and all of the things. And by the way, hurting many small businesses, you can’t let it happen,” Trump said.

Trump’s thoughts then turned to Floyd, and how America must respond to his death.

Then came the remarks taken out of context by the media.

Trump then resumed the event’s scheduled focus on the jobs report.