I still look for loony liberal enclaves like Minneapolis and New York City to try it.

Democratic lawmakers, operatives, and commentators are calling for the defunding or abolition of America’s police departments in the wake of officer Derek Chauvin’s killing of unarmed black man George Floyd.

While the proposal is popular among the party’s progressive activist wing and on Twitter, it faces a hard wall of resistance among the wider public. A recent YouGov poll showed that fewer than 20 percent of Americans of all parties supported any cutting of police funding—a finding consistent with decades of polling.

Police defunding or abolition has long been a key idea of the radical left, with advocates arguing that the use of state force should be replaced with more equitable redistribution and investment, to target “root causes” of crime rather than responding to it after the fact. That view appears to have risen to the upper echelons of the Democratic power structure—without, however, growing notably more popular among voters.

National leadership, meanwhile, has sought to either distance itself from defunding—as in the case of presumptive presidential nominee Joe Biden—or define the idea away as simply shuffling funding, as House Speaker Nancy Pelosi (D., Calif.) did Monday. Those moves reflect a lack of consensus between leadership and the base, and within the progressive activist coalition itself, as to what defunding actually entails.

Such caution from party leadership suggests that while it is popular in the streets, defunding the police is unlikely to have staying power at the federal level. Rather, it is more likely to go the way of other radical proposals like the abolition of ICE, which was quietly memory-holed when polling revealed its electoral unviability.

Police abolition’s unpopularity is bipartisan: The YouGov poll found that just 16 percent of Americans favor cutting police funds, including 16 percent of Democrats, 14 percent of Clinton voters, and only 33 percent of black people. Data from the General Social Survey stretching back to 1984 find that fewer than 20 percent of white, black, and Hispanic respondents believe that police should be given less money, never mind defunded altogether. 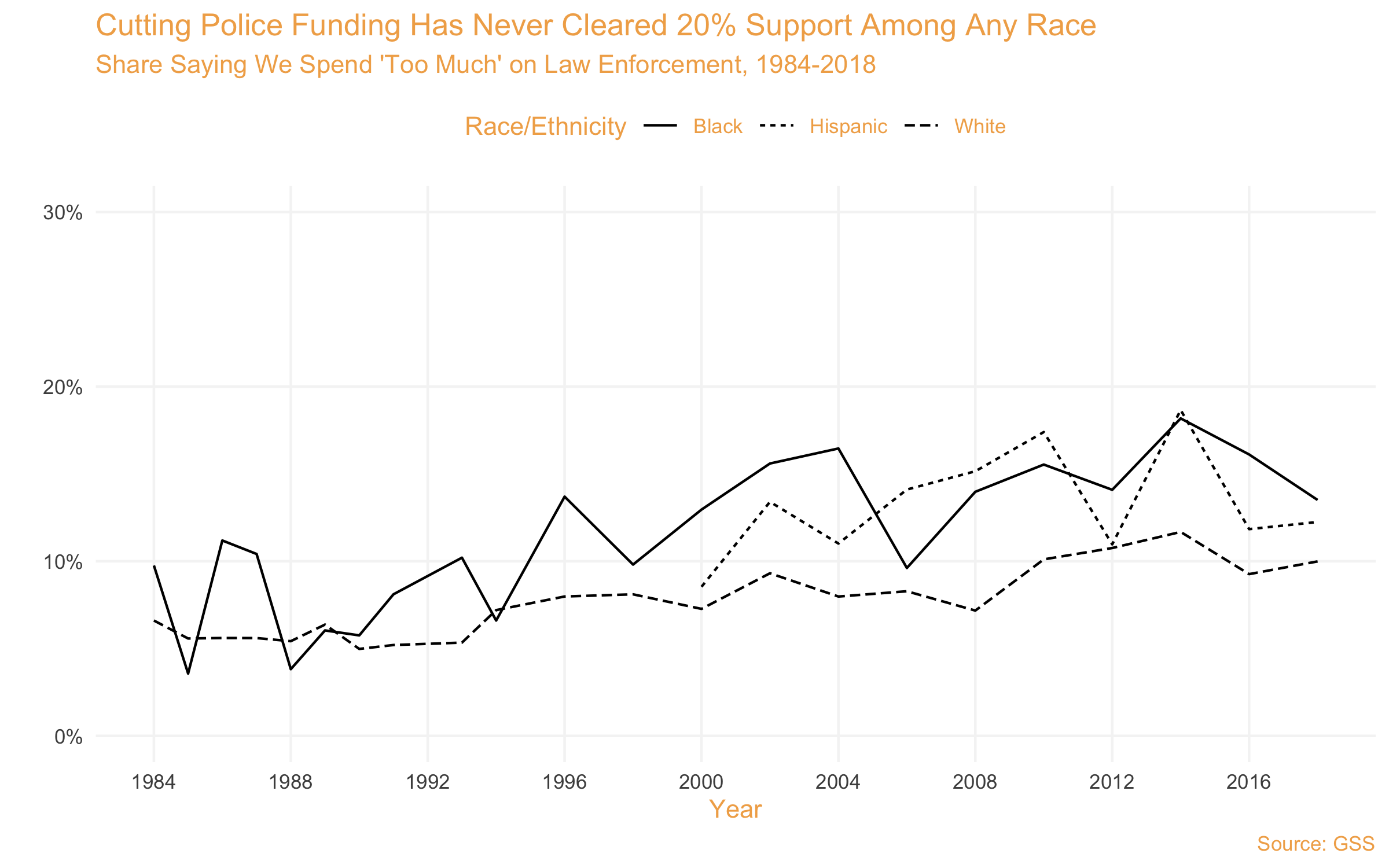 That’s consonant with broad support for police generally. As of 2017, 9 in 10 black, white, and Hispanic Americans opposed reducing the number of police officers in their community. More recent data indicate that police continue to maintain majority support among Americans and are widely considered among the most trustworthy institutions in the country.

These figures are surprisingly out of sync with both the words and actions of prominent Democrats—part of a broader shift among those in the party looking to signal their distance from or hostility to cops and prove their progressive credentials.

A number of prominent figures have explicitly called for defunding or abolition of police. Rep. Rashida Tlaib (D., Mich.) emphasized on Twitter the need to “#DefundPolice,” while Brian Fallon—former national press secretary for Hillary Clinton and former public affairs director for Attorney General Eric Holder—took to Twitter to write “defund the police.”

Alongside Fallon and Tlaib, those joining the “defund” drumbeat include Women’s March cofounder and prominent anti-Semite Linda Sarsour, leftist organizations like the Sunrise Movement and Working Families Party, and even leading progressive prosecutors like San Francisco’s Chesa Boudin.

At the state and local level, Democrats are taking concrete steps. A majority of members of the City Council of Minneapolis—where Floyd lived—announced over the weekend their plans to “begin the process of ending the Minneapolis Police Department.” Council members have made the media rounds to defend their plans—with council president Lisa Bender calling fears about public safety a product of “privilege”—while Minneapolis mayor Jacob Frey was booed at a Minneapolis protest when he refused to back the same proposal.

Los Angeles mayor Eric Garcetti, meanwhile, has promised to slash $150 million from the LAPD’s budget; New York City mayor Bill de Blasio has vowed to do the same. And some Democratic state legislators in New York, California, and Minnesota have returned donations from police and corrections officers, rejecting what they call a “vested interest in continuing the incarceration of Black and brown people.”

Republicans are eager for Democrats to voice their views on the issue.

“Every single Democrat in the country must answer to whether he or she agrees with this radical idea to rid communities of the women and men in blue who put their lives on the line to keep Americans safe,” Dave Abrams, deputy executive director for the Republican State Leadership Committee, told the Washington Free Beacon. “Silence is part of the problem, isn’t it? Time for Democrats to speak up.”

Some less-radical Democrats have sought to distance themselves from calls for defunding. Biden, through a spokesman on Tuesday, emphasized that he “does not believe that police should be defunded,” instead focusing on the “urgent need for reform.” Pelosi, asked about the idea during an appearance on MSNBC, said that defunding the police really means “spend[ing] the resources we have in a way that gives the most protection to the American people”—effectively avoiding any commitment to budget cuts.

Their reticence may be because both represent the more moderate wing of the Democratic party, the one which primary voters handed an overwhelming mandate in their selection of Biden over Sen. Bernie Sanders (I., Vt.). Biden—who has a history of endorsing tough-on-crime legislation from his time in the Senate—has walked a careful line between the progressive left’s hostility to the police and the electorate’s support for them. His policing platform, although aggressive, was the least radical of any of the major 2020 Democrats.

Pelosi and Biden may also be wary of committing themselves to a confusing policy plan—or lack thereof. While some advocates have offered concrete proposals to reallocate funding and responsibility to unarmed public servants, others, like Tlaib, have avoided concrete details, preferring instead to focus on the need to “dismantle” ill-defined systems.

Confusion about what, exactly, defunding means extends to Minneapolis, where the city council has been vague on the details of its restructuring of the police department. Many advocates draw analogies to the restructuring of the police department in Camden, New Jersey—where reforms under the county authority actually led to more, not fewer, cops on the street.

This vagueness, and the politics of the dispute more generally, recall the progressive left’s abortive push, in 2018, to abolish U.S. Immigration and Customs Enforcement. At the time, polling found that 69 percent of Americans, including a majority of Democrats, opposed the idea. Party leadership, which had initially signaled interest, left legislation to move forward on abolition dead in the water.

A similar trend looks set to play out, at least at the national level, on police abolition. Democrats introduced a proposal Monday that includes substantial restrictions on police conduct but leaves out the possibility of cuts to federal funding.