Bravo to the women of Detroit for stepping up and learning to handle a gun to protect themselves and their families.

Tanisha Moner has had a gun pointed at her twice in her life. Once by two strangers who kidnapped, robbed, and sexually assaulted her when she was 17. And, again, by another robber as she worked a management shift at a restaurant.

The traumatic experiences left her scarred, afraid of guns, shuddering at the sound of a firework and popped balloon. That changed the day she decided to face her fears and showed up for a gun-carry class at a local range.

“Succumbing to your own fear is the only thing that can stop you from doing anything you want to do,” Moner told the Washington Free Beacon.

She said that first gun-safety training class years ago helped her overcome her fear and ignited a passion to help others overcome their own fears. That’s why she says she decided to become an NRA-certified instructor. Last weekend she took part in a basic handgun safety training event where she helped to train 1,938 Detroit women—more than double the event’s 2019 attendance. The  Sunday session was so popular that the classroom portion had to be changed to an open-air event in the range’s parking lot due to overcrowding concerns and coronavirus-related precautions.

The event may serve as another indicator of the unprecedented demand for guns and training driven by the coronavirus pandemic, civil unrest, and the 2020 elections. About 10 million guns have been sold in the United States since March—a record-setting pace. The diversity seen at the Detroit event coupled with dealer-reported increases in gun sales to minorities indicates the surge is bringing in new shooters from across the social and political spectrum. 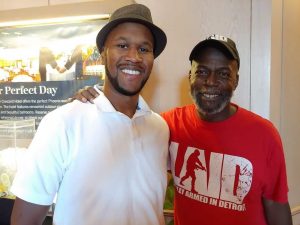 Rick Ector, a prominent firearms instructor in the Detroit area, founded the all-female training event in 2011 because of women like Moner. He said he’d seen too many stories of women in the city beaten, abused, and even murdered. He had to do something after reading multiple reports of women being brutalized and dumped in trash cans across Detroit.

Fifty women attended the first event. It enjoyed steady growth, peaking at a record 814 women in 2019, before surging alongside record gun sales and uncertainty.

“I had no idea that women would respond in a way that they did. They showed up in one wave and that wave did not abate until the evening,” he said. “They just kept coming.”

Patrick Collins, a firearms instructor in Georgia, paid for his own flight and lodging to volunteer for the event. He felt compelled to join in after hearing Moner’s story of perseverance. Collins, who like Ector and Moner is black, said the fact that the event brought in women from all different races and backgrounds was one of the most appealing aspects of being involved.

“I like the fact that we are changing what the normal demographic of shooters is,” he told the Free Beacon. “Because there is interest in other demographics that are not really noted.”

He said many of the first-time shooters turned into first-time gun owners as a result of the event.

“Quite a few of the women had me step out to help after the range because they wanted me to help them select a firearm,” Collins told the Free Beacon. “And there were quite a few firearm sales there that day as well.” 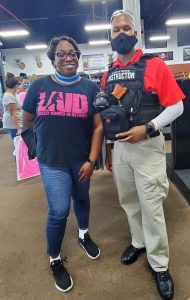 The local gun industry has rallied around the event. Recoil Firearms Shooting Range and Top Gun Shooting Sports shut down for the weekend to play host; Fenix Ammunition, a Michigan-based manufacturer, donated the ammo; Second Amendment activists at Gun Owners of America donated the eye protection. Collins said volunteers such as Moner and Collins deserved most of the credit for the event’s success, adding that he was “overjoyed with the support” from volunteer trainers.

Moner said helping women learn to take a more proactive role in their own safety is now part of her life’s work.

“I don’t have my own personal police force around me 24/7,” Moner said. “It is my duty and obligation to take care of my own personal protection. They’re gonna come after the fact, if I’m lucky. But who is there in that moment? I’ve been in that moment on more than one occasion. There’s nobody there but me.”

Moner now spends much of her time teaching gun safety professionally. She’s racked up several different certifications to teach NRA training courses and offers a gun-carry course for those trying to obtain a Michigan permit. She says the women’s training event—which Ector is looking to expand again next year—is her favorite event of the year.

“I live for this event. I really do,” Moner said. “There’s nothing like seeing a woman pull the trigger on a firearm for the very first time. It’s like a light just goes off in her. It’s a moment of enlightenment.”