The pitfalls of trying to exercise your Second Amendment Rights in a DemocRat controlled city and state.

Philadelphia residents say the city is forcing them to wait months to apply for gun-carry permits—far beyond the 45-day window required by law—at a time when gun sales are surging in the midst of the coronavirus pandemic and widespread rioting.

The delays have left some Philadelphians fearing for their safety. James Tordella, a medical supply salesman, is caught in the permit backlog. He was not surprised when basic services in the city faltered during the pandemic, but did not think dysfunction would apply to his attempt to exercise his Second Amendment rights.

“S—’s not easy in Philadelphia,” Tordella said. “I’m not sure the city is actually trying to stomp on my rights—they may just be grossly incompetent.”

The uncertainty brought on by the pandemic, recent rioting in the city, and a spike in killings pushed several residents who spoke to the Washington Free Beacon to seek out licenses that would enable them to carry their legal weapons with them. Their ordeal sheds light on the effects the chaos of 2020 has had on average Americans looking for security—especially those in states likely to determine the next president of the United States.

Temple University law school alum Jude Joanis applied for a permit shortly after a shooting in his North Philadelphia neighborhood. After the Philadelphia Police Department’s gun permit unit reopened at the end of July, he repeatedly called to book an appointment—at one point employing an auto dialer. He said that an officer told him the earliest appointment to apply for a permit was next year—Jan. 11, 2021. Local law enforcement is supposed to process license applications within 45 days, but Philadelphia has seemingly evaded the requirement by forcing applicants to wait up to a year to submit their application.

“Philadelphia just passed 300 total murder victims and has recorded 1,334 shooting victims,” he said. “I want to exercise my right to self-defense.”

Democratic governor Tom Wolf did not return a request for comment.

Pennsylvania State Police have attempted to deal with the rush on gun purchases since the coronavirus outbreak by extending the expiration dates of existing carry permits. Licenses that were set to expire in March 2020 will now be valid through December 31. Tordella said the temporary reprieve is of little consolation.

“As soon as the licensing board reopened, I started trying to call to get an appointment,” he said. “[The gun permit unit’s] numbers were endlessly busy and the few times I did get an actual ring the phone was never answered or disconnected.”

After 10 days of unanswered calls, Tordella was able to schedule an appointment for Jan. 19, 2021. The delay could leave him unable to legally carry his gun. His 21-year-old daughter’s appointment to obtain her first permit was pushed to February.

“She wants to carry a pistol and she can’t get a license due to this BS,” Tordella said. “She deserves to be able to defend herself.”

A Philadelphia Police Department spokesman did not respond to a request for comment. Repeated calls to the phone lines set up for scheduling permit appointments went unanswered.

“I had recently purchased my first firearm in late August,” he said. “I was dismayed to learn that applications for said permit would not be processed until September of 2021. I’ve tried to contact the department that handles concealed-carry permits in the city and haven’t been able to get someone on the line to answer questions.”

Driven by concern over rioting in early June that required the deployment of the National Guard, Gonzalez said he is now considering moving to a neighboring county just to obtain his permit.

“It’ll be less effort and much less time-consuming to temporarily relocate to live with family in another county, get the permit, and move back to Philly,” he said.

Some counties have handled the surge far better than others. Officials at sheriff’s offices in suburban Montgomery, Bucks, and Berks counties all indicated they were dealing with slight delays but appointments for submitting permit applications were running smoothly, with some still offering same-day scheduling. 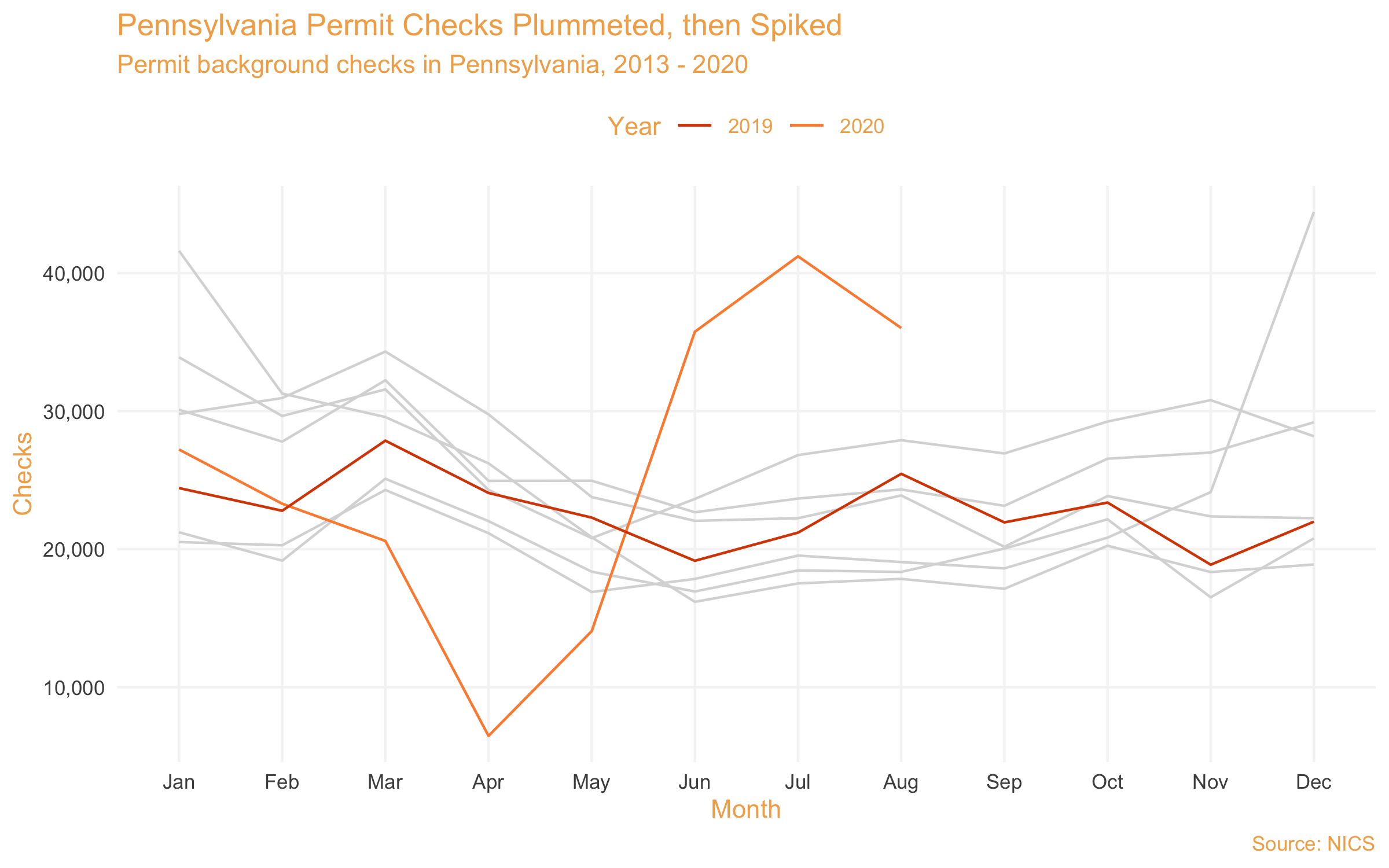 John, who recently moved from Philadelphia to Warminster in Bucks County for an IT job and asked for his identity to be protected for fear of backlash, said he was able to renew his permit on July 21 in just a matter of hours.

“When I entered the office, they took my application, $20 in cash, and after 15 minutes of waiting, they issued my permit,” he said.

Philadelphia is not alone in its delays. An official with the Delaware County Sheriff’s firearms licensing division said residents will have to wait until January to schedule a new appointment. and the Chester County Sheriff’s Office website indicates its next available application appointment is March 8, 2021.

Adam Kraut, a Pennsylvania attorney who has represented clients seeking gun-carry permits in Philadelphia, said higher demand and coronavirus restrictions could explain the delays, but those issues only exacerbated the city’s flawed process. Philadelphia, for example, does not allow applicants to submit applications or photographs online and employs a “unique fingerprinting requirement” that other Pennsylvania localities do not, according to Kraut.

“The problem is the way Philadelphia does it is different than everywhere else,” he said. “They have all these additional things that they require people to answer and questions that aren’t on the form [required by state law] itself.”

A 2019 report from the state police shows Bucks County issued more permits than Philadelphia despite the city’s population being about two and a half times larger. Joanis said the delays reflect the city’s obstruction of gun rights for residents.

“When people don’t exercise their rights, it makes it easier for the government to suppress those rights,” he said. “In most counties the process to get a [concealed-carry license] is simple. I want Philadelphia’s process to become as simple and quick as possible.”