This political anti-cop hack wants to be the next Senator from Arizona.

Comments came as Arizona Dem tried to portray himself as moderate on policing issues.

The campaign spokesman for Arizona Democratic Senate candidate Mark Kelly referred to police as “worthless f—ing pigs” on Twitter in August, a comment that could complicate Kelly’s effort to distance himself from radical anti-police sentiment from the left flank of his party.

T.J. L’Heureux, Kelly’s deputy press secretary, posted the message in response to a video that showed Chicago police clashing with protesters over the summer. “You worthless f—ing pigs,” wrote L’Heureux on Aug. 17, directing the message to the Chicago Police Department’s official Twitter account. 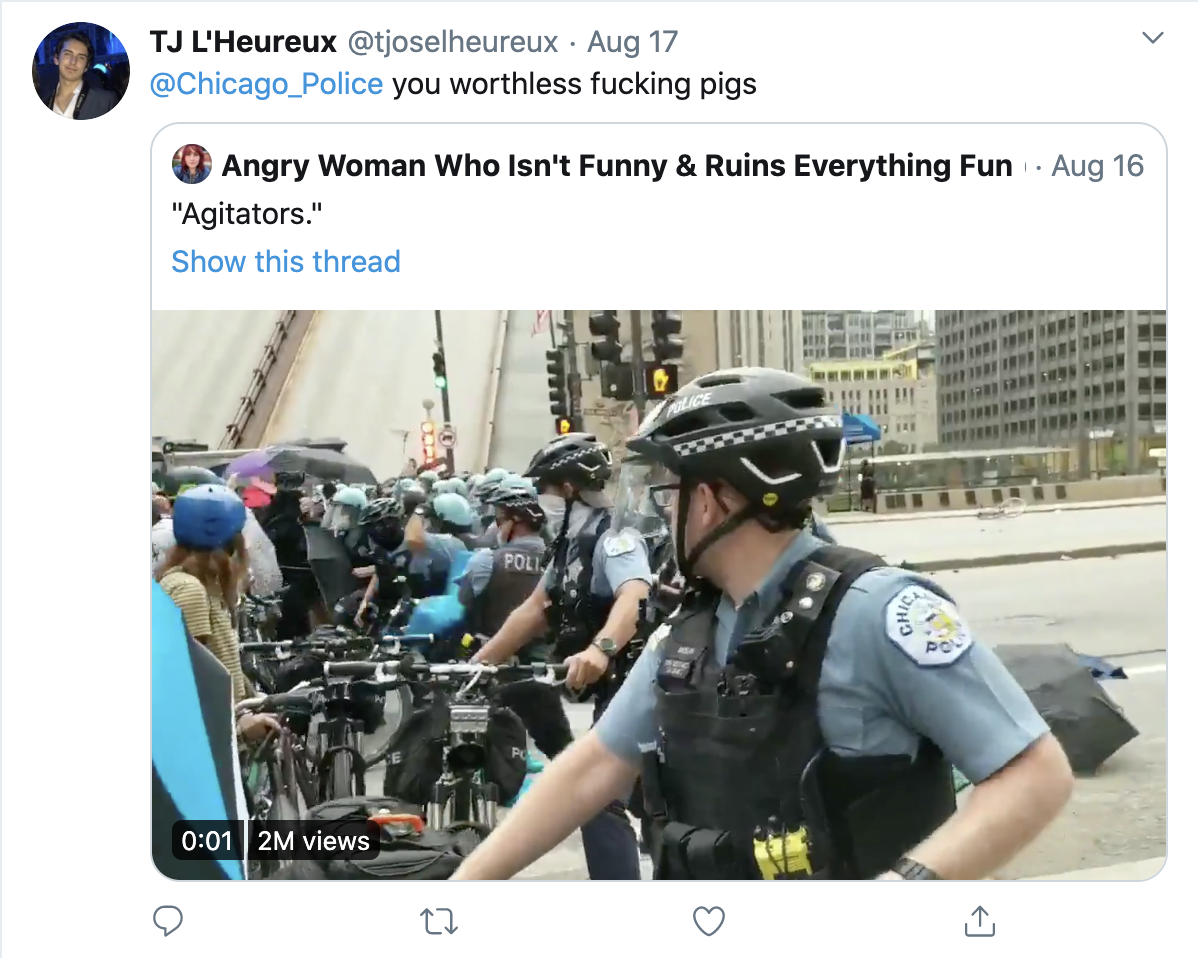 L’Heureux officially joined Kelly’s campaign as a spokesperson one week later, on Aug. 24.

The post came as the Kelly campaign has sought to portray itself as moderate on policing issues. Kelly, whose parents were police officers, has said he opposes defunding law enforcement agencies, a policy supported by some Democratic lawmakers and leaders of the anti-police protests erupting across the country.

“It sadly isn’t the first time I’ve seen this from Democratic campaign personnel,” Clure told the Washington Free Beacon. “I hope that [Kelly] fires [the staffer] immediately to show that he doesn’t condone this kind of attitude that police are ‘f—ing worthless.'”

L’Heureux’s Twitter post included a video of Chicago police officers in riot gear seizing open umbrellas from a phalanx of protesters on Aug. 16

According to the Chicago police superintendent, protesters were using umbrellas to shield their actions from view as they prepared to attack officers. At a previous protest, rioters reportedly hid behind umbrellas while distributing projectiles and pelting police with frozen water bottles, rocks, and pipes.

Kelly’s opponent, Republican incumbent senator Martha McSally, accused him in August of wanting to “defund the police,” a charge Kelly denies. But Kelly has also criticized the criminal justice system for having “deep systemic issues here with racism.”

“There needs to be a justice system that doesn’t discriminate against anyone because of their race, but I do not agree that we should defund the police,” Kelly told KTAR News in June.

Although Kelly has attempted to strike a moderate tone on the issue, the Arizona Police Association threw its endorsement behind McSally in September.

L’Heureux was a press assistant for Pete Buttigieg’s presidential campaign until March. On Aug. 24, he announced on Twitter that he had been hired by Kelly’s campaign, writing, “Just thought I’d let you know I’m joining the Communications team for @CaptMarkKelly and am super excited to help turn AZ blue! 71 days until Nov. 3—let’s do this #FullSpeedAhead.”