The two million lost jobs under the Biden economic plan will just be the tip of the iceberg of job loss.

One of Joe Biden’s top economic policy priorities could kill as many as two million new jobs, a new report finds.

Biden has championed a $15 minimum wage throughout his presidential bid. The Democrat’s website touts helping “get state and local laws increasing the minimum wage across the finish line” and calls it “well past time we increase the federal minimum wage to $15 across the country.” An analysis from the pro-free market Employment Policies Institute (EPI) found that a nationwide mandate for a $15 minimum wage—more than double the current federal rate of $7.25 per hour—could eliminate millions of jobs within its first six years. 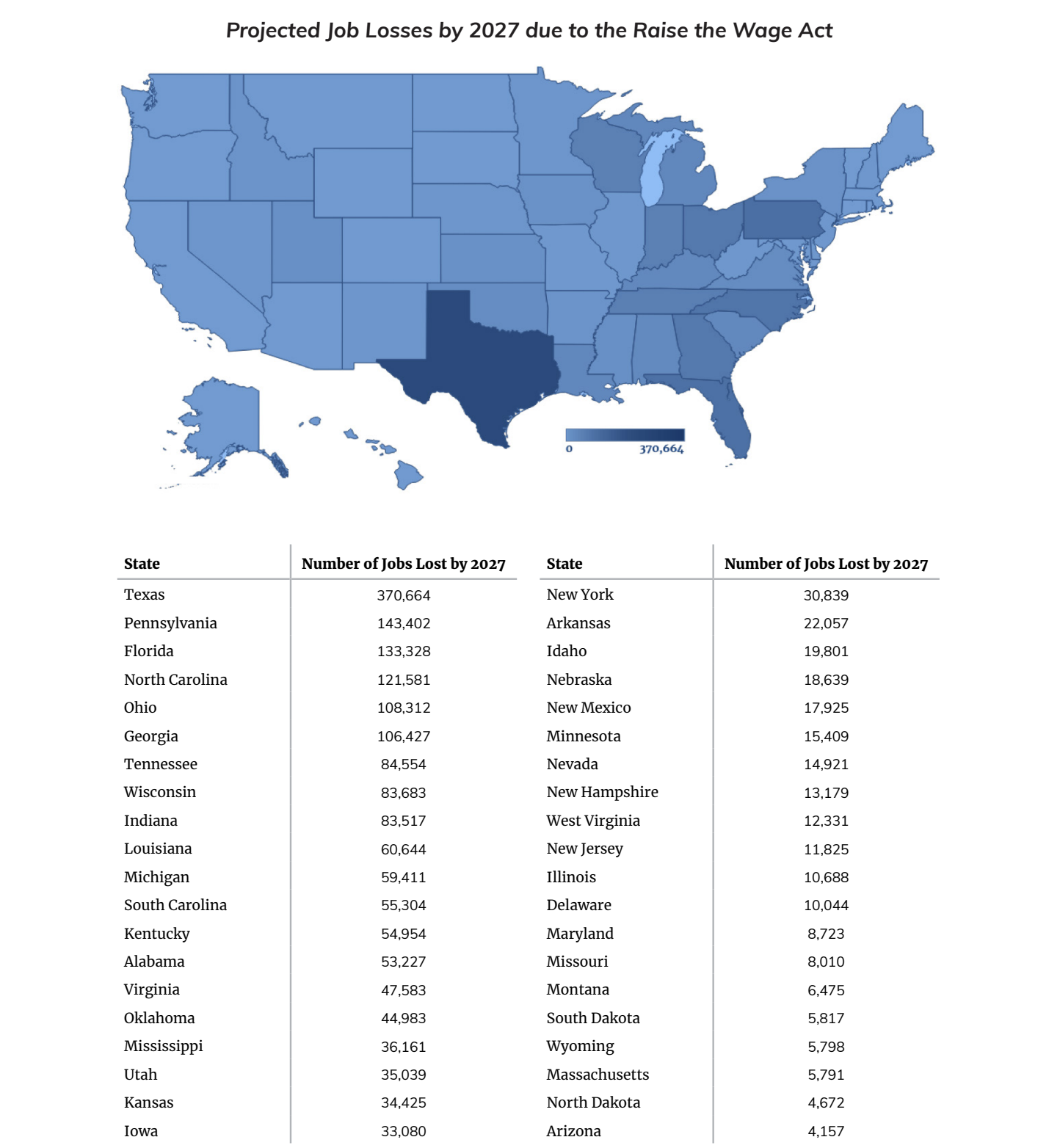 Economists found that those job losses would fall mainly among vulnerable populations, with some of the heaviest cuts coming in low-skill or entry-level positions. Half of the two million jobs lost as a result of the policy will occur in the arts, entertainment, recreation and accommodation, and food services sectors. Texas is projected to be the hardest hit state—losing more than 370,000 jobs by 2027—followed by Pennsylvania, Florida, North Carolina, Ohio, and Georgia. The majority of jobs lost will be those held by women, the report shows.

EPI managing director Michael Saltsman said the Biden-backed policy would only exacerbate the financial woes of small businesses amid the pandemic.

“Business owners across the country are already facing a great loss after the economic downturn caused by the coronavirus,” Saltsman told the Washington Free Beacon. “Increasing labor costs through a federal $15 minimum wage would only bring businesses—and the people they employ—closer to the point of no return.”

The report builds on a similar 2019 Congressional Budget Office study by using its most recent economic forecasts, meaning it accounts for the coronavirus pandemic. It uses the Raise the Wage Act as a framework—the legislation calls for a $15 federal minimum wage and $12.60 federal tipped wage by 2027 and was passed by House Democrats in 2019.

The projection of two million lost jobs does not include states and localities that have already raised the minimum wage. Cities such as San Francisco and Seattle currently have minimum wages above $15 an hour, and seven states have laws in place requiring a $15 minimum wage by 2025 or earlier.

“Federal and state policymakers must take into account the impact of enacting a $15 federal minimum wage, especially as placing the burden of steeply rising labor costs on employers on top of COVID-19 struggles will cause businesses to reduce their employment or close altogether,” the report states.

The vote became a source of turmoil within the U.S. Chamber of Commerce’s political advisory committee, which recently endorsed 18 Democrats who voted in favor of the Raise the Wage Act. The chamber previously railed against the legislation, urging lawmakers to vote against it in a July 2019 letter that warned of “disruptive impacts on employers, particularly small businesses, as well as negative effects on the job opportunities for first and lower-skilled workers.”

Longtime chamber political strategist Scott Reed went on to leave the group in late September, telling Politico that he “can no longer be part of this institution as it moves to the left.” The chamber, however, said it fired Reed for cause.

Biden’s campaign did not return a request for comment on the study.