$15.00 per hr.minimum wage  would cost jobs and cause businesses to close $23.00 would bankrupt many more businesses.

Klain retweeted a tweet by California-based investor and onetime presidential aspirant Joe Sanberg that called $15 per hour a “step in the right direction” but argued that Americans are “entitled to $23 an hour” to keep in line with rising productivity since the 1960s. 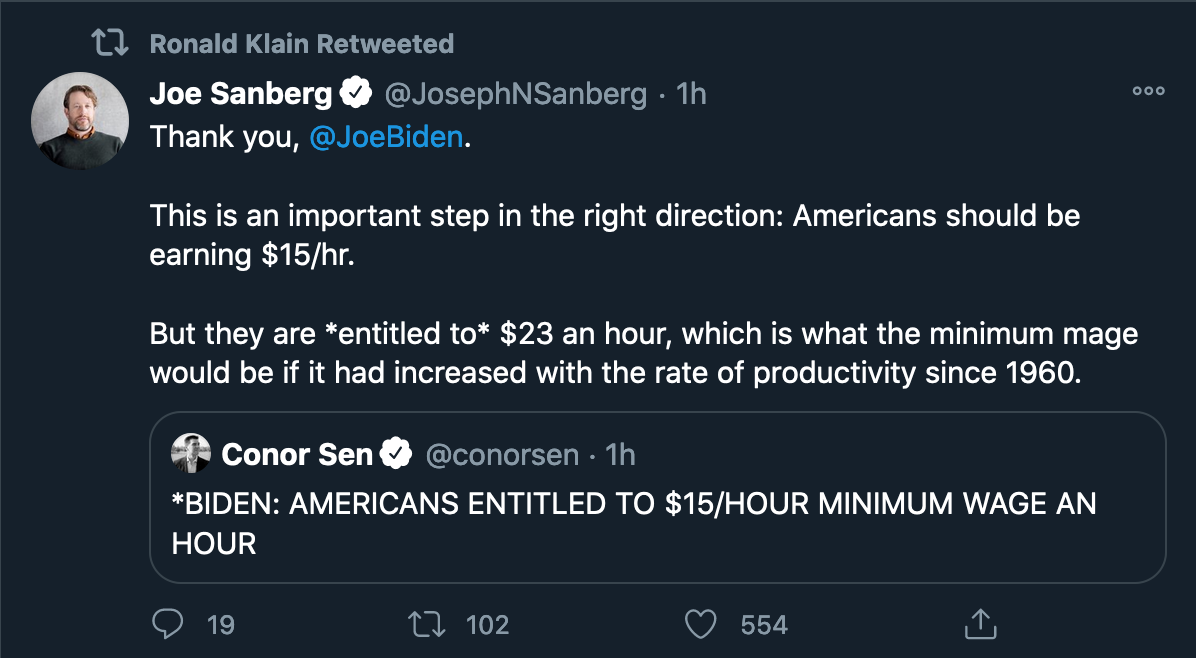 The Biden transition team did not respond to a request for comment as to whether either Klain or Biden endorses a $23-per-hour minimum wage.

Klain’s gesture came as Biden said Friday that he wanted to see the federal minimum wage boosted to $15 per hour, up from $7.25. That’s in line with the demands of the “Fight for Fifteen” movement, which has agitated for a national wage hike since 2012. Biden has already endorsed the proposal as part of his “build back better” economic agenda.

Sanberg is a generous supporter of Biden. FEC records indicate that he gave $50,000 to the Biden Victory Fund, a pro-Biden fundraising group, as well as the legal maximum of $2,800 to the candidate himself. He has generously supported other Democrats and was at one point considering a run for the 2020 Democratic nomination himself on an anti-poverty platform.

A $23-per-hour minimum wage would likely exacerbate inequality even more than a $15-per-hour payout. That’s the conclusion of an expert analysis of the $15 proposal from the libertarian-leaning Mercatus Center. While a higher federal minimum wage would boost some workers’ earnings, it would do so at the expense of pushing others out of the labor market—specifically, Mercatus fellow Robert Graboyes notes, the “young, inexperienced, disabled, and poorly educated, along with immigrants, inner-city dwellers, those whose skills have grown obsolete, and residents of areas where costs of living are low.”