Will someone tell this dumb bastard there is no such thing a office of President elect.

“The [corporate-government] revolving door limits the trust Americans have in government and has time and time again led to bad policy outcomes,” the letter adds. “We urge you to take advantage of this unique and historic moment in American history to shut the revolving door and rebuild that trust.”

Biden’s advisory team helping his transition with White House’s Office of Management and Budget, however, includes executives from Amazon Web Services, Lyft, Airbnb. Additional advisors have ties to WestExec Advisors, a corporate consulting firm co-founded by Antony Blinken, his nominee for secretary of state, and Michèle Flournoy, who was floated as a possible secretary of defense.

“This puts us at a state of high alarm,” Jeff Hauser, who runs the Revolving Door Project, a group dedicated to limiting the appointments of lobbyists and corporate executives in government, told The New York Times in November.

A spokesman for Citizens for Responsibility and Ethics in Washington did not immediately respond to a request for comment. 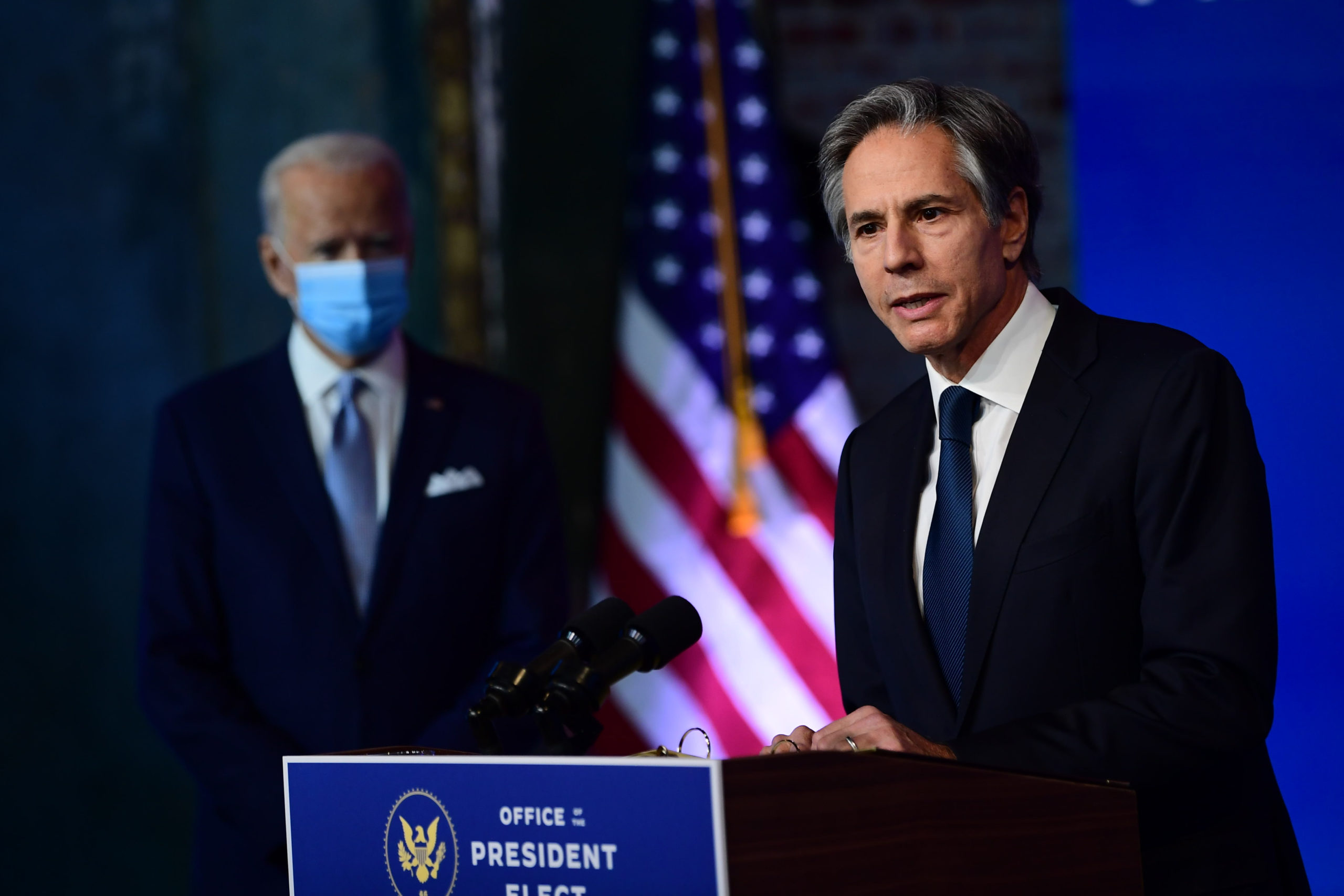 In addition to the corporate influence at OMB, Steve Ricchetti, one of Biden’s top White House advisors and a longtime aide, also has strong ties to Amazon and its federal lobbying efforts. The company recently hired his brother, Jeff Ricchetti, to lobby on COVID-19 and the implementation of the CARES Act, according to its disclosure forms.

The two co-founded the lobbying firm Ricchetti Inc. in 2001 after Steve Ricchetti left President Bill Clinton’s administration, where he served as deputy chief of staff.

Steve Ricchetti and Blinken, whose private-sector work is omitted from his biography on the Biden transition site, are not the only figures in the incoming Biden administration with corporate ties. Ron Klain, Biden’s incoming chief of staff, worked with AOL founder Steve Case in venture capital and warned about the impact government regulation can have on technology start-ups in a 2015 op-ed.

Despite the ties between his developing administration and corporations, Biden took an aggressive stance against lobbyists and special interests during the campaign, pledging to reduce the influence of money in politics, heighten ethical standards, rein in financial conflicts of interest in the Executive Branch and more.

U.S.A. –-(AmmoLand.com)- On 28 September 2020, a warrant was served in Jacksonville Florida, just before 8 a.m. The warrant was not a no-knock warrant. There is evidence the officers serving the warrant attempted to announce themselves with loudspeakers and by knocking. The warrant was served by a Special Weapons And Tactics (SWAT) team and the DEA. When they did not get an answer, they started to break in. They were not wearing body cameras.

Diamonds Ford started shooting at them. She hit one officer in his vest, which saved him from a bullet wound. She called 911 and told the operator her home was being attacked.

Operator: “Ma’am give me the name of the street.’

Ford: Someone is shooting.

Operator: “7232 Rutledge Pearson Drive, do you know who is shooting?”

There is more on the video. This partial transcript gives you the flavor.

It is hard to deceive convincingly, on the spur of the moment. Diamonds Ford sounds very convincing.

Ford says she and her fiancee were sleeping, awoke to the sound of breaking glass, and she fired at the presumed home invaders.

In the United States, people prize their Second Amendment rights. Their home is their castle. People serving warrants need to take special care.

A warrant announcement that is not heard, is equivalent in effect to a no-knock warrant. One troubling aspect of the raid – no officers wore body cameras. Some neighbors say they were sleeping as well and did not hear the announcement.

This situation can happen to people of any race or religion. We saw a similar event in Houston. The Breonna Taylor case has similarities. The important difference, in this case, is no one was killed. The officer who was hit was protected by his vest. The officers did not fire blindly into the home when they were fired upon.

Diamonds Ford and Anthony Gantt were charged with armed possession of marijuana with intent to sell and attempted murder of a police officer. From news4jax.com:

Although, the judge did acknowledge that some neighbors who were interviewed by police said they were asleep and didn’t hear anything at all before or during the raid.

Charbula also left the door open for a possible bond reduction down the road.

“If, during the discovery process, the Defendant discovers evidence that weakens the State’s claim that the Defendant knew that it was JSO outside her window before she fired and shot a SWAT detective multiple times, this Court will allow the Defendant to file a subsequent motion to reduce bond,” Charbula wrote.

Local attorney Gene Nichols, not affiliated with the case, believes this is promising for the defense.

There have been several cases where, when officers were fired upon, the people doing the shooting were acquitted or the charges were dropped. They include people who are black, white, and Asian.

It helps if the home defender has a sterling record. In the Diamonds Ford case, the couple had some minor criminal history.  From jacksonville.com:

A check of Duval County jail records shows both suspects have only a few past local arrests. Gantt was arrested in 2013 for auto burglary and this past May for driving with a suspended license, drug possession and fleeing the scene of an accident. Ford’s arrests included one in 2014 for child abuse, and another in 2010 for fighting.

Minor criminal history is not enough to deny someone their Second Amendment rights.

You cannot have both Second Amendment rights, the right to defend your home as your castle, accepted and widespread in society; and not expect startled homeowners to occasionally shoot police officers who, by some combination of circumstances, do not announce sufficiently to make their presence clearly and unequivocally known.

These types of raids are becoming well known. The public response is not in the favor of the police.  Americans love their Second Amendment rights and prize their ability to defend their homes with lethal force.

More and better announcements are happening before breaking down doors.

More police will wear body cameras on the raids. Everyone is going to be held to more accountability through ubiquitous digital recording devices.

A look at some of the history of the Times Square Ball Drop.

The first New Year’s Eve Ball, made of iron and wood and adorned with one hundred 25-watt light bulbs, was 5 feet in diameter and weighed 700 pounds. It was built by a young immigrant metalworker named Jacob Starr, and for most of the twentieth century the company he founded, sign maker Artkraft Strauss, was responsible for lowering the Ball.

As part of the 1907-1908 festivities, waiters in the fabled “lobster palaces” and other deluxe eateries in hotels surrounding Times Square were supplied with battery-powered top hats emblazoned with the numbers “1908” fashioned of tiny light bulbs. At the stroke of midnight, they all “flipped their lids” and the year on their foreheads lit up in conjunction with the numbers “1908” on the parapet of the Times Tower lighting up to signal the arrival of the new year.

The Ball has been lowered every year since 1907, with the exceptions of 1942 and 1943, when the ceremony was suspended due to the wartime “dimout” of lights in New York City. Nevertheless, the crowds still gathered in Times Square in those years and greeted the New Year with a minute of silence followed by the ringing of chimes from sound trucks parked at the base of the tower—a harkening-back to the earlier celebrations at Trinity Church, where crowds would gather to “ring out the old, ring in the new.”

In 1920, a 400 pound Ball made entirely of wrought iron replaced the original. In 1955, the iron Ball was replaced with an aluminum Ball weighing a mere 150 pounds. This aluminum Ball remained unchanged until the 1980s, when red light bulbs and the addition of a green stem converted the Ball into an apple for the “I Love New York” marketing campaign from 1981 until 1988. After seven years, the traditional glowing white Ball with white light bulbs and without the green stem returned to brightly light the sky above Times Square. In 1995, the Ball was upgraded with aluminum skin, rhinestones, strobes, and computer controls, but the aluminum Ball was lowered for the last time in 1998.

For Times Square 2000, the millennium celebration at the Crossroads of the World, the New Year’s Eve Ball was completely redesigned by Waterford Crystal and Philips Lighting. The crystal Ball combined the latest in lighting technology with the most traditional of materials, reminding us of our past as we gazed into the future and the beginning of a new millennium.

In 2007, for the 100th anniversary of the Times Square Ball Drop tradition, Waterford Crystal and Philips Lighting crafted a spectacular new LED crystal Ball. The incandescent and halogen bulbs of the past century were replaced by state-of-the-art Philips Luxeon LED lighting technology that dramatically increased the brightness and color capabilities of the Ball.

The beauty and energy efficiency of the Centennial Ball inspired the building owners of One Times Square to build the permanent Big Ball weighing nearly six tons and twelve feet in diameter. The 2,688 Waterford Crystal triangles are illuminated by 32,256 Philips Luxeon LEDs. This Big Times Square New Year’s Eve Ball is now a year-round attraction sparkling above Times Square  in full public view January through December.

The actual notion of a ball “dropping” to signal the passage of time dates back long before New Year’s Eve was ever celebrated in Times Square. The first “time-ball” was installed atop England’s Royal Observatory at Greenwich in 1833. This ball would drop at one o’clock every afternoon, allowing the captains of nearby ships to precisely set their chronometers (a vital navigational instrument).

Around 150 public time-balls are believed to have been installed around the world after the success at Greenwich, though few survive and still work. The tradition is carried on today in places like the United States Naval Observatory in Washington, DC, where a time-ball descends from a flagpole at noon each day – and of course, once a year in Times Square, where it marks the stroke of midnight not for a few ships’ captains, but for over one billion people watching worldwide.

Wishing you a safe and Happy New Year.