A friend of mine used to say he would sooner be missed by a .45 than hit by a .22 as a.22 had a tendency to go in you and bounce around causing lots of damage.

Whatever you may read on the intertubes, not everyone is a high speed, low drag tactical operator. They don’t walk around all day strapped with an optics-equipped, suppressor-ready pistol that packs 17+1 rounds of ammo in a drop leg holster (in addition to a couple of extra magazines).

Here in the real world, lots of people choose to buy guns that don’t intimidate them. Guns that are easy to load and easy to shoot. When they were standing at the gun counter, they only wanted to make sure they were buying something that would go ‘bang,’ not a pistol that a Navy SEAL might carry.

So yes, many of these people bought handguns chambered in .22LR for personal defense, either to carry or for home defense purposes.

We know…you’re horrified. I wouldn’t be caught dead carrying a pop gun like that! Shooting a bad guy with a rimfire round will only make him angry!

But the first rule of self-defense is…have a gun. The reality is, lots of people actually do rely on .22LR for personal defense. And if your personal defense gat is a .22, you’ll want to fill it with the best ammo for the job.

In light of that, back in January the people at Federal Premium introduced Punch 22 ammunition for short-barrel .22LR handguns. 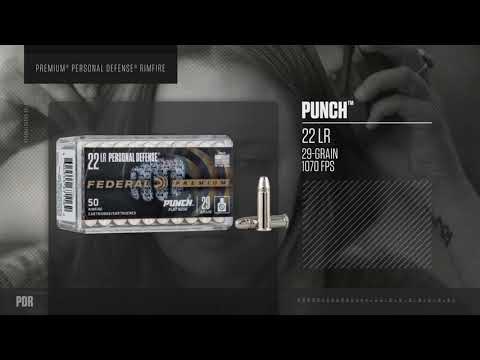 Self-defense isn’t one size fits all. Punch 22 LR from Federal Premium uses a first-of-its-kind nickel-plated lead-core bullet pushed at maximum velocities to achieve the deepest penetration through short-barrel handguns. So, whether you want to carry a 22 LR pistol as a backup gun, don’t feel comfortable with centerfire pistols, or simply want to get more versatility from your rimfire, Punch makes the 22 LR cartridge a viable choice for the first time ever.

The people at Federal, who know a thing or two about the ammunition market, recognized that in a country of 100 million or so gun owners, many of them will be very content and sleep quite well at night owning a handgun that’s chambered in .22LR. Hence Punch 22.

As for the question of penetration . . .

So what about it? Do you own or carry a .22LR for personal defense? Know someone who does? Have you recovered yet from reading that there are people who do?