The first time I saw a piece of radioactive glassware was on an episode of Pawn Stars.

The Collectors Who Hunt Down Radioactive Glassware 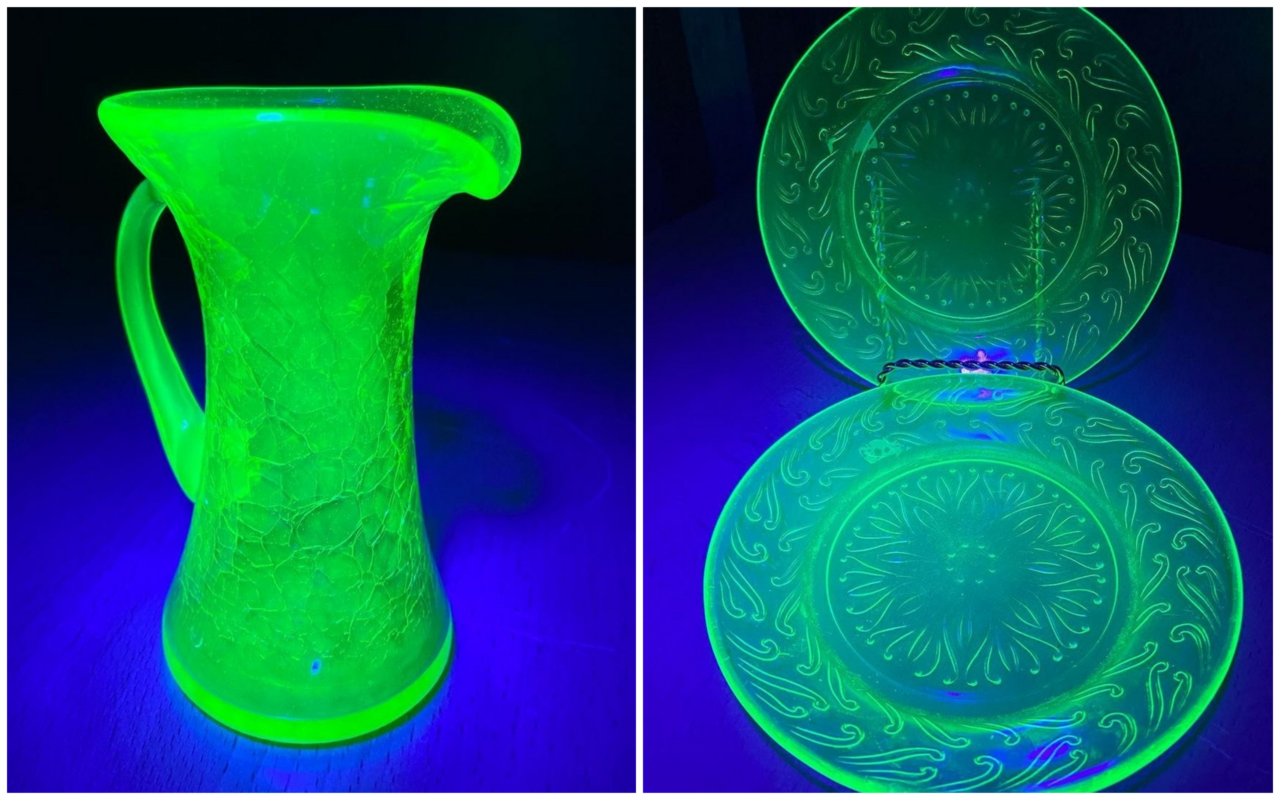 IN JANUARY OF 2021, A New Jersey teenager brought a piece of an antique Fiestaware plate to a high-school science class. The student had received a Geiger counter, an instrument used to measure radiation, for Christmas, and wanted to do an experiment. When the plate registered as radioactive, someone at the school panicked and called in a hazmat team. The entire school was evacuated, and those in the nuclear science field were aghast.

But thousands of similarly radioactive plates and cups can be found in antique stores, thrift shops, and possibly your own kitchen cabinets. Radioactive antiques have a long history, as well as a certain glow that is highly desired by some collectors today.

The scientists dismayed by the events at Haddon Township High School were not upset that someone had brought in a radioactive plate. They thought school administrators had overreacted. When it comes to radiological hazards, says health physicist Phil Broughton, “There is a world of difference between detectable and dangerous.”

Prior to World War II, and well before its potential for energy or weaponry was recognized, uranium was commonly used as a coloring agent in everything from plates, glasses, and punch bowls to vases, candlesticks, and beads. Uranium glass mosaics existed as early as 79 AD.

The Depression-Era Glassware That Came in Boxes of Oatmeal

These vibrant dishes helped cheer up Americans during a bleak time.
Largest Egg

Also known as canary or vaseline glass, uranium glass is typically yellow or green in color and glows bright green under a black light. Shades can range from a translucent canary yellow to an opaque milky white depending on how much uranium is added to the glass, from just a trace to upwards of 25 percent. Uranium was also used in the glaze of orange-red Fiestaware, also known as “radioactive red,” prior to 1944, and was once a common sight in American kitchens.

Although uranium glassware does register on a handheld Geiger counter, the radiation amounts are considered negligible and on par with radiation emitted from other everyday items such as smoke detectors and cell phones. In response to the school evacuation, 50 scientists signed a letter stating that Fiestaware “is among the most benign radioactive materials commonly found in the home” and applauding the student for his curiosity.

Broughton says that people in his field hunt for uranium-containing Fiestaware all the time. “It’s pretty, and it’s a great check source,” he says. By that, he means that having a Fiestaware plate, a reliable source of radiation, is handy for making sure your radiation-detection meter is working. And It’s not just nuclear scientists that get excited about uranium glass. For some depression-era glassware collectors, the only color that matters is glow-in-the-dark.

Dan and Lisa Sawyers’ interest in radium glass began when they were scouring the shores of Lake Superior for fluorescent sodalites, unremarkable-looking gray rocks that contain minerals that glow under UV light. While combing the beach with a blacklight at night, they found a strange piece of sea glass that glowed under UV light. They were initially puzzled, until they discovered it was uranium glass. They’ve been hooked ever since.

The Sawyers began searching through thrift stores and antique shops for any items that fluoresced under a blacklight. Uranium glass items are readily available online, but they say it is more fun to find them “in the wild.” They’ve bought intricately carved serving dishes, kitschy souvenir cups, glowing marbles, and, one of their personal favorites, a bird-shaped salt dip. When I asked Dan if he gets weird looks when poking around shops with a black light, he says, “Yes, at times, but it depends where I shop.” Some in-the-know antique stores have blacklight displays. At another, Dan says, he shined a blacklight and watched the entire store light up. The owner immediately marked up those items’ prices.

Dan says places like the Salvation Army and Goodwill are gold mines—or uranium mines—for the stuff. “Kids are inheriting grandma’s old glassware and it goes straight to Goodwill.” If you have inherited any yellow or green antique glassware, there’s a good chance it glows.

Some collectors hunt uranium glass using Geiger counters. “The higher the radiation count, the more they like it,” says Dan. But he’s mainly into the glow. He’s also intrigued by how everything seemed to have its own dish in the early 1900s. He’s found a whipped-topping uranium glass dish with a matching spoon and a dish specifically for mayonnaise with a matching flat-bottomed spoon. “I can’t imagine what place settings would have looked like back then with all this green glass sitting out,” says Dan.

The Sawyers have accumulated more than 200 pieces of uranium glass, yet say their collection will probably wind up back in circulation at a thrift store someday. “What’s the chance one of our three kids will want this stuff shipped across the country?” says Dan. “Very doubtful.”

Uranium glass fell out of production in the United States during World War II when all uranium use was restricted to nuclear-weapons development. After the war, says Phil Broughton, it was no longer the cheapest green colorant available, and the amount of paperwork required to work with uranium in the United States dissuaded most glassworkers. He knows of uranium glassblowers in Germany, England, and New Zealand, but they mainly create glass art rather than glassware sets.

Increased awareness and alarm over the dangers of radiation, says Broughton, also gave rise to a radiation-safety principle called ALARA, an acronym meaning As Low As Reasonably Achievable. “Although the amount of uranium you’ll leach out of a uranium glass is pathetically small,” he says, “as a general rule, [you] don’t uptake radioactive material you don’t have to do.” In fact, the U.S. Environmental Protection Agency recommends not eating or drinking out of uranium glassware at all.

“If people want to collect uranium glass and Fiestaware, that’s fine, it’s the radium-containing products that we’d really prefer people don’t collect,” says Broughton. Unlike uranium glass, these items are highly radioactive and harmful. As a health physicist, he feels it is part of his job to make sure the public understands the difference. As for uranium glass, he says, there’s much to appreciate. “It’s green, it looks awesome under UV light, and since it’s effectively crystal, really good artists can make some gorgeous works out of it.”