I am part of the generation that used to call them thongs but now call them flip flops. 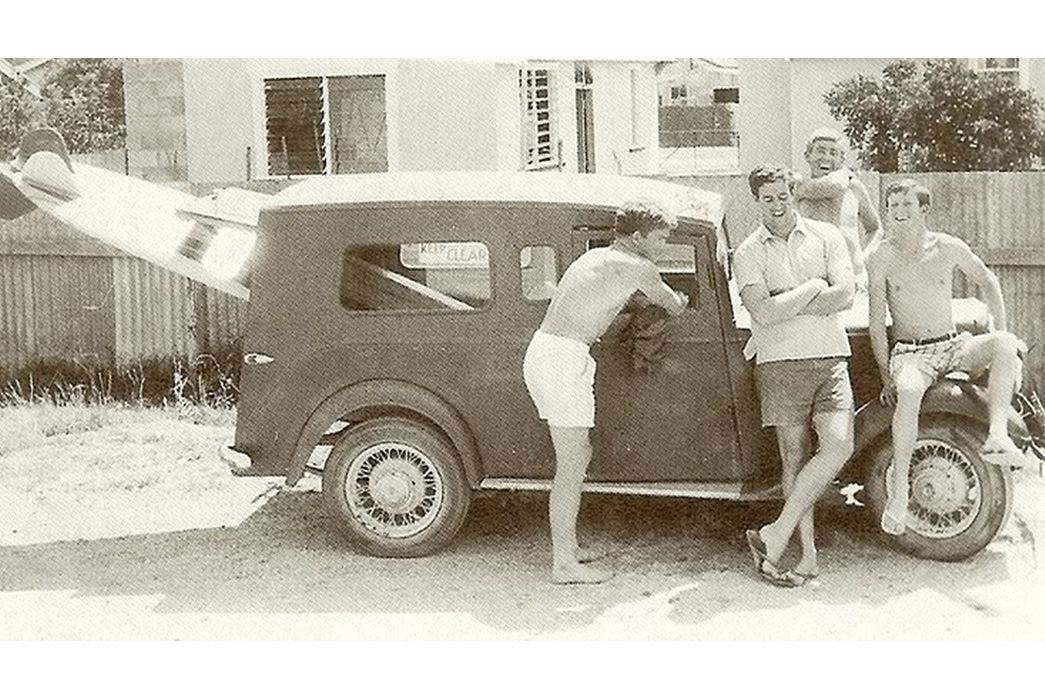 Few, except the pettiest among us, will remember a 2005 controversy surrounding the Northwestern University’s women’s lacrosse team wearing flip-flops to the White House. In a world, only 13 years ago, when the folks visiting and working in the White House were expected to act with some level of decorum, exposed toes (and feet) caused a stir.

The flip-flop, as we know it, has been worn in the states since the end of the Second World War, but this skimpy little shoe somehow remains a topic of debate. From a surfing shoe to the scourge of middle school dress codes, the modern flip-flop has integrated itself into our daily lives. 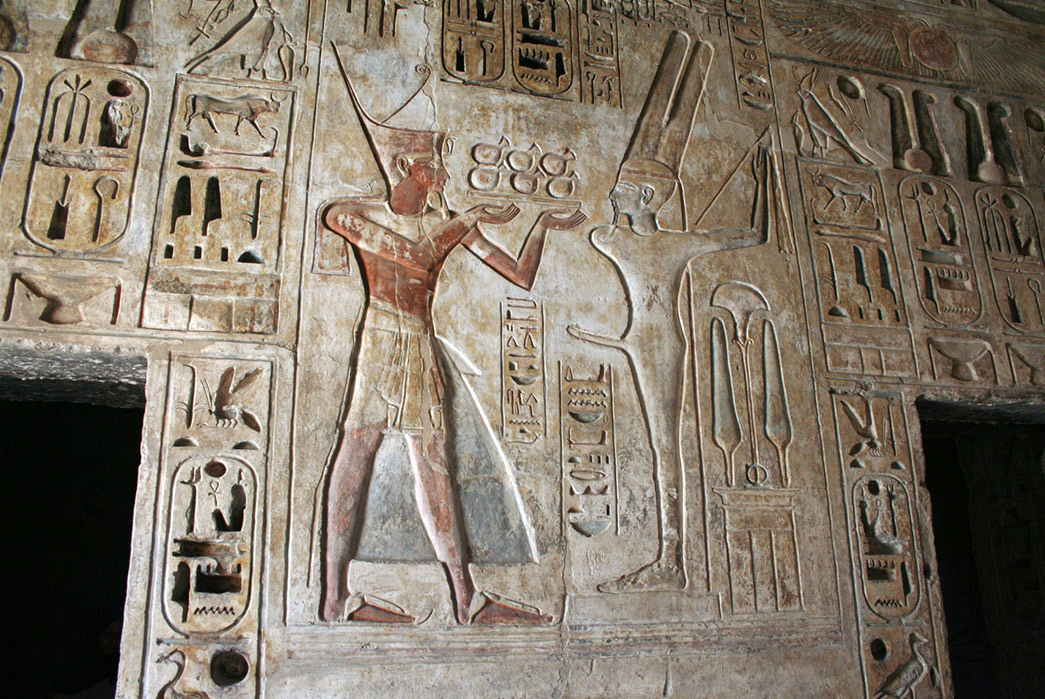 The Oldest Evidence of Sandals. Image via Art of Counting.

Liz Lemon from TV’s 30 Rock once said, “All of humankind has one thing in common: the sandwich.” But there may be one other thing… the sandal.

Although the earliest recorded evidence of people wearing sandals comes from Egypt, it appears that the majority of ancient cultures had their own variant of this simple and practical little shoe. Many of the internet’s most esteemed pseudo-historians have attempted to determine whether the sandal originated in the Mediterranean or somewhere in Asia and which culture eventually disseminated sandal culture around the globe.

One could just as easily argue that the sandal–like the wrapping of proteins in carbs (i.e. the sandwich)–is universal. Materials and design varied slightly between cultures, but the sandal seems a logical and simple approach to life in warm climates, as opposed to some elaborate trading situation. Sandals in Greece had the thong rest between the first and second toe, while in Rome, the same implement rested between the second and third. Mesopotamians’ sandals had the thong between the third and fourth toe, while the traditional chappal of India used a knob in place of the thong.

The Zori Becomes the Flip-Flop 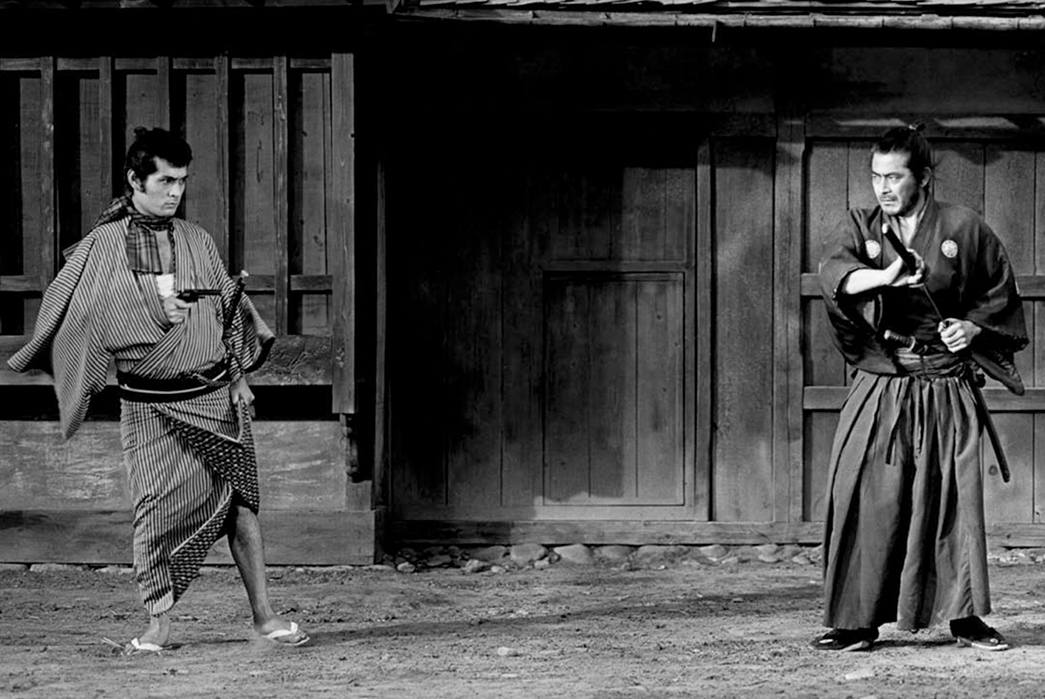 The flip-flop that we know and recognize, though, has its roots in Japan. As shown in the graphic below, there were several main types of traditional sandals worn in Japan. Research remains inconclusive as to whether or not these styles are indigenous to the island or not. Regardless; the everyday version of the sandal: the Zori, would act as the template for the soon-to-be Western beach sensation.

Typically made of rice straw, the sandal’s thong rested between the first and second toes. Unlike, the wood-platformed geta sandal, zoris were typically worn with tabi, white or black socks with the big toe divided from the rest. In the above image from Yojimbo, Toshiro Mifune’s character (right) wears tabi with his zori sandals, while his more uncouth rival wears them barefoot. 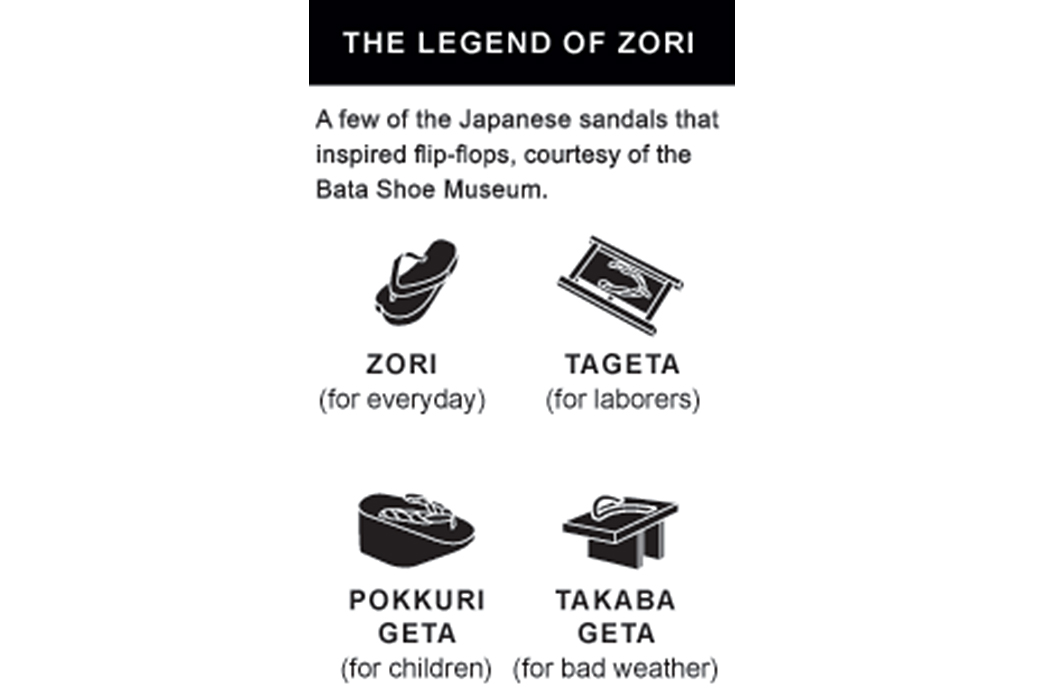 Legend of Zori. Image via The New York Times.

Over the course of World War II, the Japanese had seized much of Southeast Asia’s natural resources and rubber was no exception. In 1945, devastated by its loss and occupied by its Western enemies, Japan set about establishing a cheap industry with which to rebuild its fragile economy. Using these rubber reserves from the war and replicating the simplest piece of Japanese footwear led to the creation of the flip-flop.

The Flip-Flop in the West 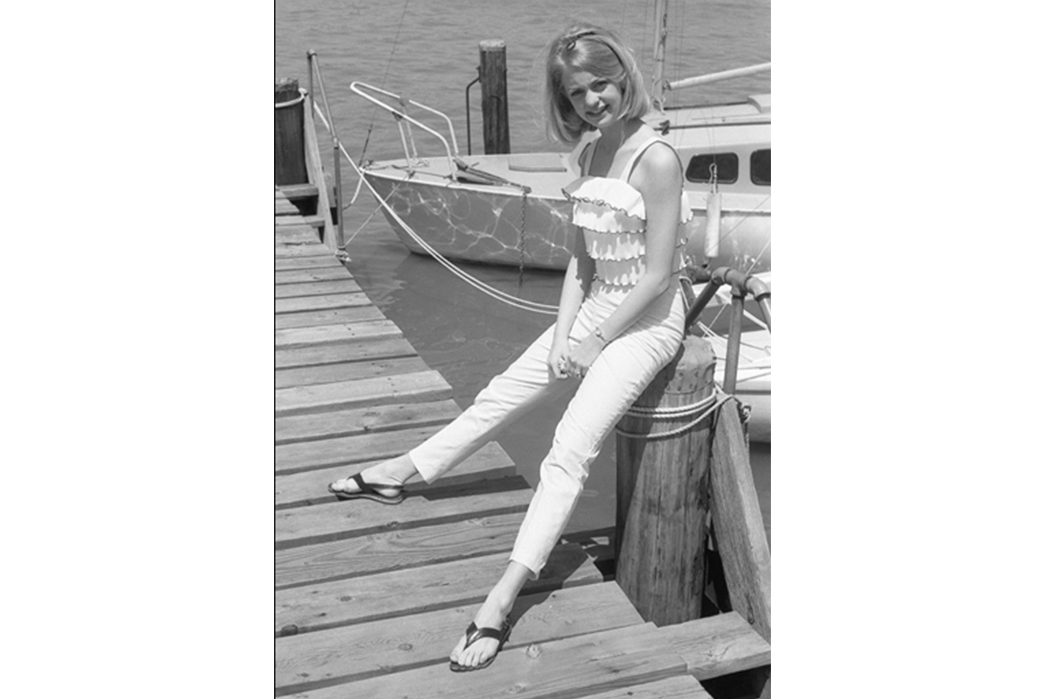 Women and children were the first Americans won over by the cheap rubber sandals arriving from Japan in the 1950s. Returning GIs had bought Japanese sandals as novelty gifts, but the comfort and simplicity of the shoes clearly won people over.

Marketed in New Zealand as Jandals, a combination of “Japan” and “sandals,” the shoe was generically called a thong in the U.S., after the piece worn between the toes. 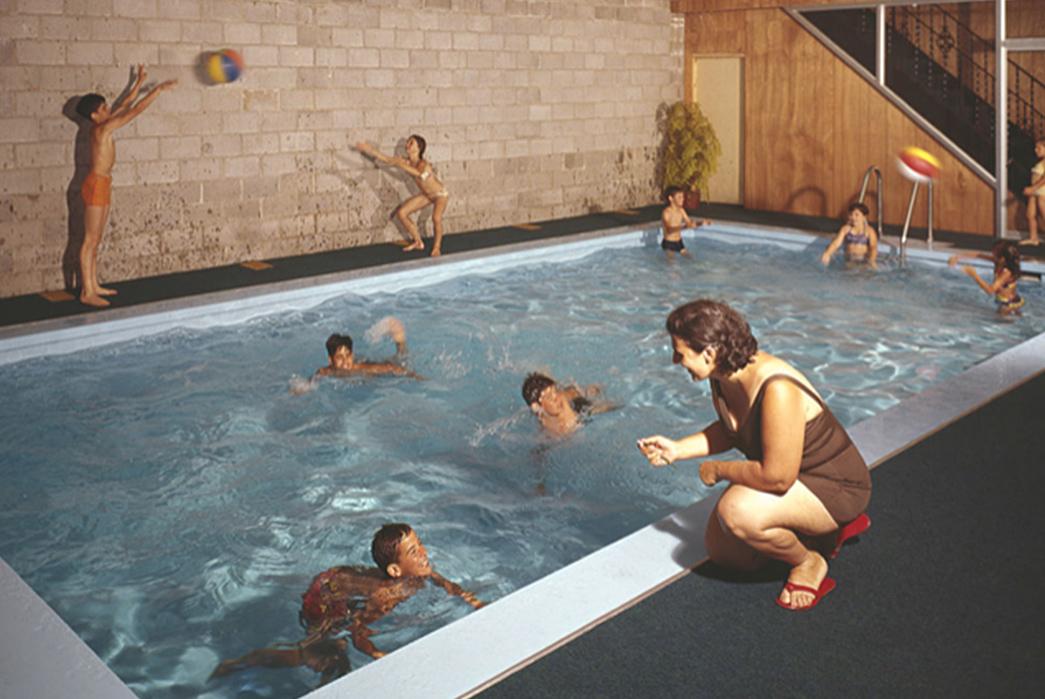 “Thongs” at the pool. Image via AOL.

The modified zoris on America’s feet in the 1950s started appearing in ever more vibrant colors and received the name “flip-flop” sometime in the 1960s, simply for the sound they made as they smacked on the wearer’s feet. They were interchangeably referred to as “thongs” until sometime in the 1980s, at which point that word came to stand solely for a well-known style of underwear.

Flip-flops in rubber, and later in plastic, were an obvious hit for beach-goers. Not only were they water and sand-proof, but they were easy to get on and off. Their ease of wear and general irreverence made them a hit with surfers and despite their early adoption in Australia, cemented the connection between thongs/flip-flops with California’s surf scene. 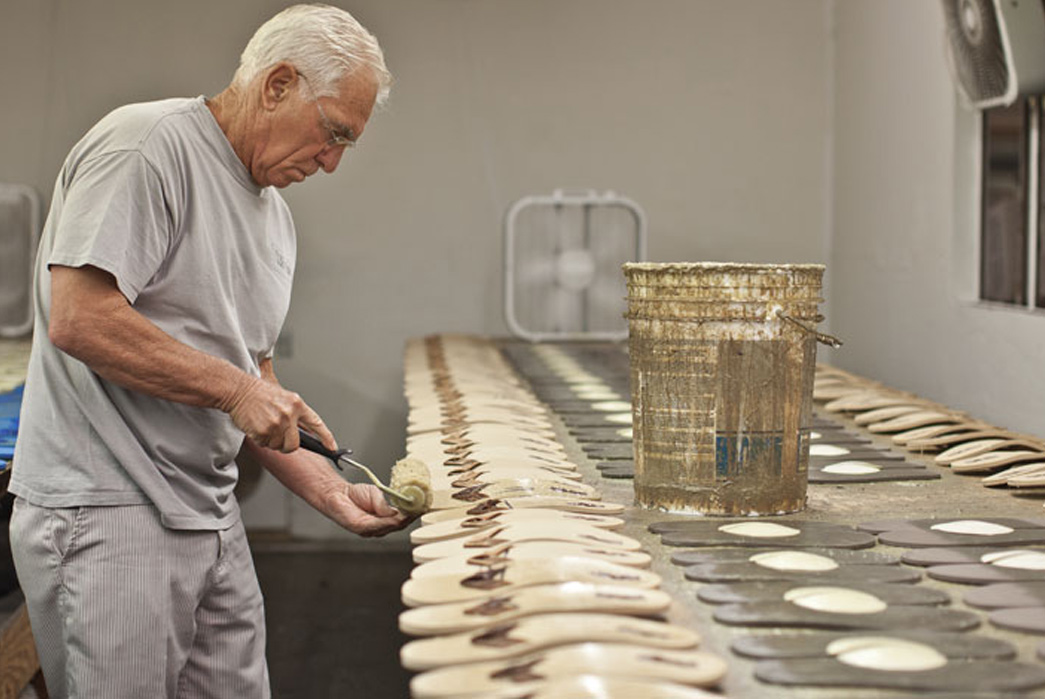 Flip-flops have remained largely unchanged since their arrival in the U.S. The y-shaped thong and flat sole have stood the test of time.

Two potential issues, however, loom with flip-flops in the modern world.

The first is social acceptability. The polemic when it comes to pretty much any open-toed footwear is: “where can I wear them?” There still seem to be nay-sayers among us who hate seeing flip-flops outside of their beach-going context, but exposed feet are the least of society’s problems. If you feel like letting your feet fly, go right ahead.

The second, and much more real issue, is environmental impact. Although quality flip-flops exist, most are much more disposable. People pick up a pair, trash ’em in a few months, and throw them away. Flip-flops are often made of plastic and most discarded ones wind up in landfills or the ocean, leaching their chemicals and not really decomposing.

If you buy flip-flops, try to make them ones that last. We have a few options below that fit the bill. 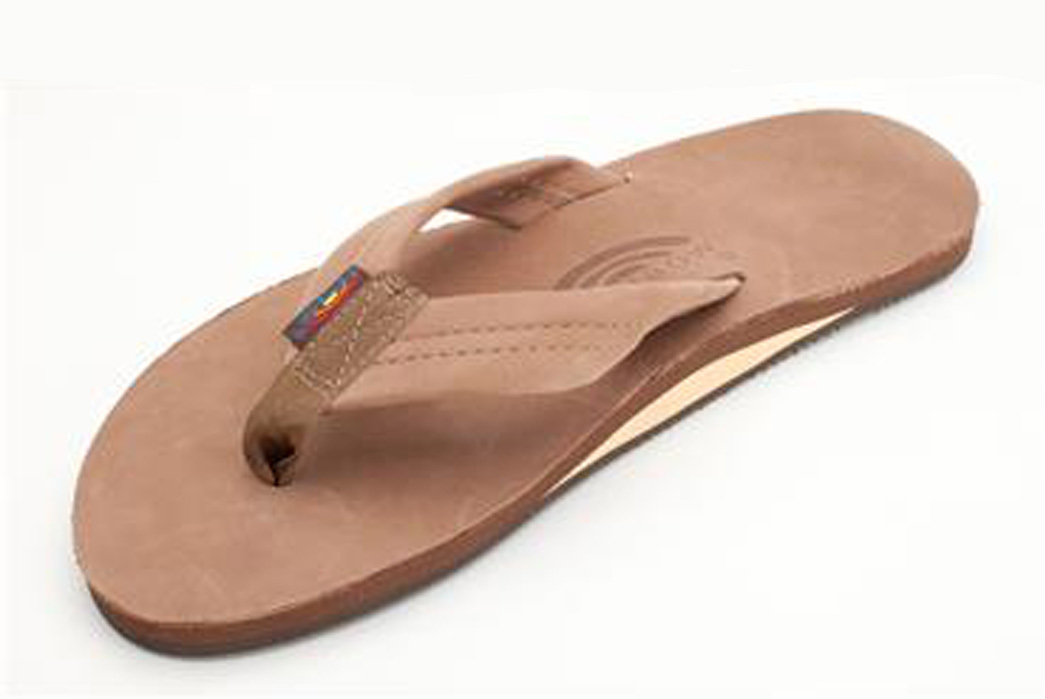 Rainbow has been turning out flip flops from their same design since the 1970s. Their take is slightly higher end and made from leather, which will hold up better than your garden-variety convenience store versions. They have a classic beachcomber look, the leather will patina well with wear, and come in quite affordable.

Available for $54 at Rainbow. 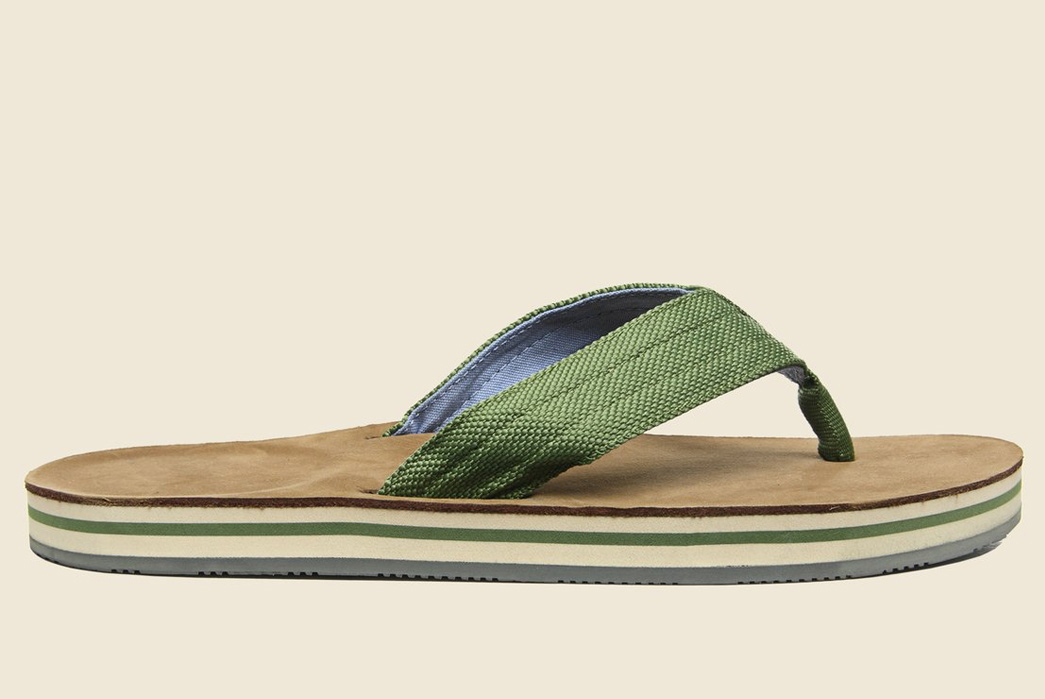 Hari Mari fuses old with new with a nubuck leather insole atop a memory foam wedge with arch support. Better yet, nearly all the synthetics are made from recycled and sustainable materials.

Available for $65 at Stag Provisions. 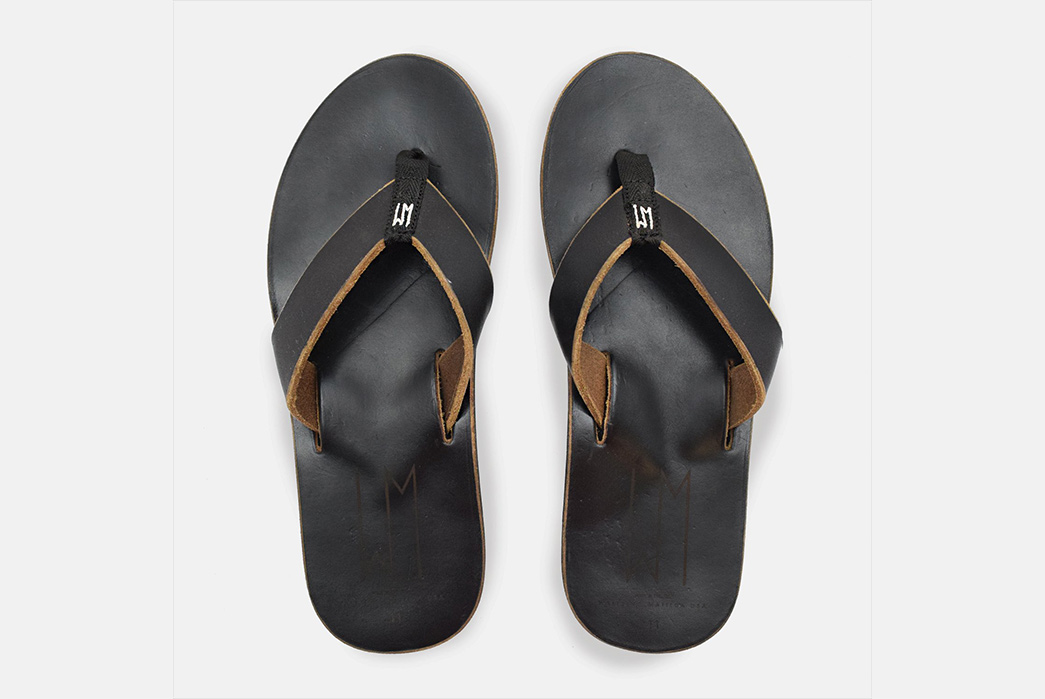 The luxe of the luxe in basic flip-flops is this offering from Waltzing Matilda. Cut from Wickett & Craig tannery’s veg-tan leather, this pair is build to mold to one’s foot and age well while doing it.

Available for $88 at Waltzing Matilda.