Pity the poor onion ring, the underdog of fast food side orders. The crispy, delicious, slightly sweet, slightly savory finger-food is arguably the perfect side to any burger and even makes a logical, if not genius, burger condiment. Yet the onion ring has never quite been able to match the popularity of the more ubiquitous French fry or other fast food sides (via Eat This, Not That). Perhaps it’s because French fries came first, having gotten their start somewhere in Europe as early as the 1700s (albeit not necessarily France), according to Le Monde. By contrast, onion rings appear to come from an English pedigree, with the first known recipe appearing in a recipe book by chef, John Mollard: The Art of Cookery, Made Easy and Refined, which was published in 1802, according to Onion Business.

A quick perusal of the recipe reveals Mollard’s “fried onions” (as he dubbed them) called for half-inch-thick onion slices to be dipped in batter, fried in lard, and served with a side of mustard-spiked melted butter (via Project Gutenberg). With the exception of the sauce, you might recognize Mollard’s vision as not altogether different from our current notion of onion rings. As unequivocal as that may seem, it appears that others have nevertheless laid claim to having invented the onion ring. So, then, what is the untold truth of onion rings? 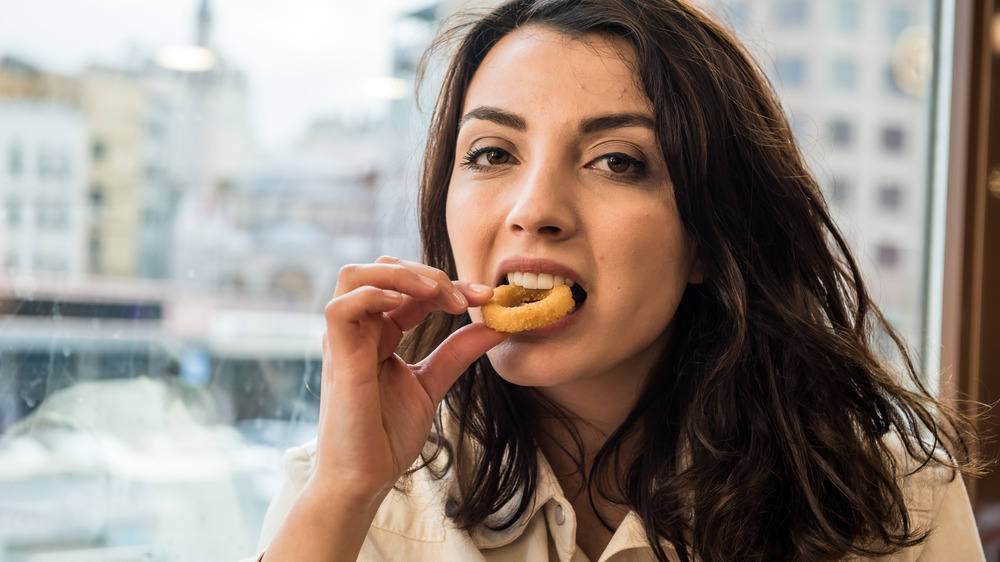 Brace yourself, because the untold truth of onion rings is that their origin story might, in fact, be lost to history. While the first known recipe for them appears to be in a British cookbook from 1802 (via National Today), other sources claim onion rings were invented by cooks working at the erstwhile Texas-based Pig Stand during the 1920s (via History.com). But could it be that onion rings were the dreamchild of multiple inventors toiling independently and during different centuries, but entirely in ignorance of one another’s work?

Indeed, it could. According to PubMed, scientists say “simultaneous inventions” of this sort give credence to the saying, “Great minds think alike.” Unfortunately, the same cannot be said of the minds that came up with the idea of making onion rings not by deep-frying actual rings of onion, but by deep-frying rings formed from a paste made of processed onions — or worse, powdered onions. Uh, yes, Burger King, we are talking about you and your powdered onion formulation, which is only one of the surprising truths about Burger King’s onion rings (via Cleveland.com). The fact that some supposed “onion rings” are made this way may go a long way toward explaining why onion rings have had a hard time competing with French fries for the top spot as a fast-food side. You can judge for yourself with an official ranking of fast food onion rings.