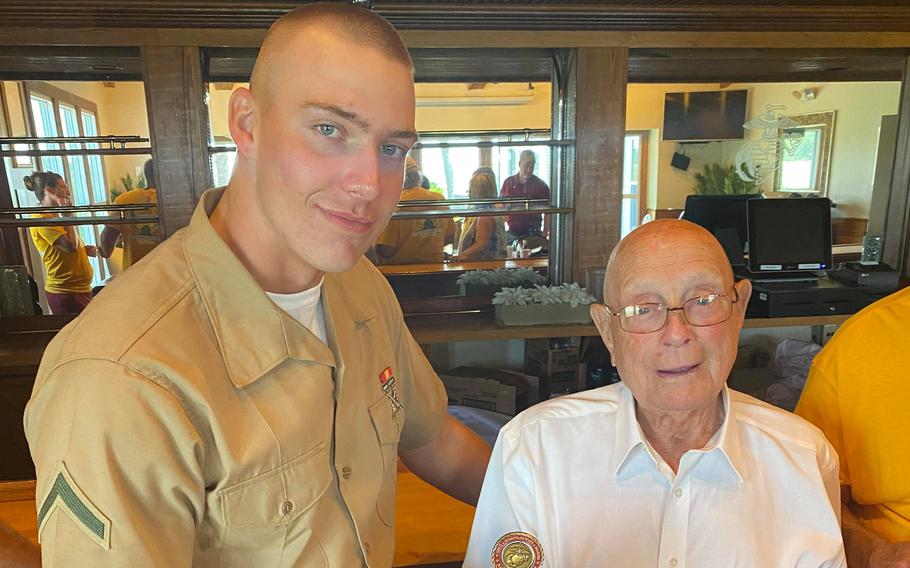 The great-grandson of legendary U.S. Marine Hershel Woodrow “Woody” Williams has been welcomed into the Corps by his granddad. Williams was awarded the Medal of Honor for extreme heroism during the vicious Battle of Iwo Jima and is now the last living Medal of Honor recipient from WWII.

Williams’ great-grandson, Pfc. Cedar Ross, has recently graduated from the Marine Corps boot camp and has been given some useful words of advice from his decorated family member. Williams said, “The only advice I think I gave him was to do the very best that he could and then do a little more.”

The graduation ceremony is the first that family members have been able to attend since the beginning of the COVID-19 pandemic, allowing Williams to watch his great-grandson and 350 fresh Marines cross the parade area at the Marine Corps Recruit Depot Parris Island.

Williams was once in Ross’s shoes back in 1943, when he enlisted in the U.S. Marine Corps. He first attempted to enlist in 1942, motivated by the Japanese attack on Pearl Harbor, but he was turned down for being too short (5 foot 6). In 1943, the U.S. reduced the height limit and he successfully enlisted in the Marine Corps. He was trained in demolitions and using the flamethrower.

On February 21, 1945, Williams arrived on the beaches of Iwo Jima, an island that was host to one of the most brutal battles of the entire war.

During the battle, U.S. tanks were attempting to clear a way through the island’s defenses for the infantry, but came up against a series of Japanese bunkers unleashing deadly fire on the following troops. Williams was ordered to take his flamethrower and assist a fellow soldier armed with explosives to neutralize the Japanese bunkers. They would be covered by a group of riflemen.

All of the men with Williams were cut down by enemy fire before they could reach the bunkers. Williams remained unscathed, however, and made his way to a bunker, where he inserted his flamethrower into an opening of the bunker, killing the occupants inside.

Williams moved to another bunker and placed “the nozzle of his flamethrower through the air vent, killing the occupants, and silencing the gun,” as quoted from his Medal of Honor citation.

His citation also said that “he fought desperately for four hours under terrific enemy small-arms fire and repeatedly returned to his own lines to prepare demolition charges and obtain serviced flamethrowers, struggling back, frequently to the rear of hostile emplacements, to wipe out one position after another.”

For these actions, Williams was awarded the Medal of Honor personally by U.S. President Harry S. Truman and became a legend of the Marine Corps. The U.S. has since named a Navy vessel, a National Guard facility, and a VA Medical Center after him.

A tough legacy to beat

So, Ross certainly has big boots to fill. Until about halfway through boot camp, the drill instructors had no idea he was the great-grandson of the decorated Marine. During the tough 13-week training process the new Marines went through, Ross received a promotion to private first class.

Ross was interviewed beside Williams. “The chief drill instructor told me, ‘Ross, you’re going to have big shoes to fill,’” Ross said. “I said, ‘Yes, sir. Thankfully, I wear size 15.’”