Just as Smitty expected, their destination was quickly coming up over the horizon. The fleeting glimpse of solid land, Milne Bay, New Guinea was only a short stopover for water (such a disappointment) and they continued their cruisenorth. The 11th Airborne Divisioncame upon the humming waterfront of ships manipulating to unload troops, supplies and equipment in OroBay. They witnessed a paradoxalview of organized chaos.

Down the rope ladders they went to the beach taxis, DUKWs (2 ton amphibious vehicles commonly called “ducks”) and onward to the awaiting shoreline. At latitude 8*52’60S and longitude 148*30’0E, thiswould become the first step for many a G.I. on foreign soil. Once they actually hitthe beach, the heat seemed to slam into the troopers and their uniforms became soaked within minutes, but they proceeded on to the Buna-Dobodura area to make their new base camp. 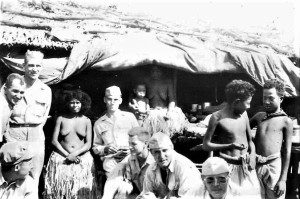 One thought on “Letter VI – Land Ho! On the Port Side”