Chipman is not fit to lead a porta potty cleaning detail.

U.S.A. – -(Ammoland.com)- “President Biden’s nominee to lead the Bureau of Alcohol, Tobacco and Firearms (ATF) is in hot water as the White House has yet to say if the administration is confident he will be confirmed,” Fox News reported Thursday. “David Chipman, Biden’s pick to lead the ATF, has been in the hot seat throughout his Senate confirmation process as a slew of lawmakers and organizations have come out in opposition to his nomination.”

That’s putting it mildly. “Gun rights” organization have warned their members of what a Chipman confirmation will mean, with many leading campaigns asking members to contact their senators and urge a “No” vote (not that that does much good if your senator is Chuck Schumer or Dianne Feinstein).  The National Shooting Sports Foundation even bought TV spots in West Virginia and Maine, presumably to convince Joe Manchin that his “No” vote is needed and to pressure “Republican” Susan Collins that now is not the time to (once again) side with the Democrats.

Reports have surfaced about ATF agents opposed to Chipman, and those are bolstered by a public denouncement from former ATF honcho Michael Sullivan. Charges that he is a “bully,” or has made racist comments, or is covering up a lost gun have not been explored. Ditto for the influence of Chipman’s anti-gun and anti-Republican wife, herself an ATF employee and citizen disarmament activist. Much of that is due to very valuable and groundbreaking work by our friends at Mom-at-Arms.

Also instrumental in uncovering disqualifying details is the American Accountability Foundation, which sent its July 1 report on Chipman’s “record of toxic, problematic, and discriminatory behavior at the ATF” to the United States Senate, not that doctrinaire Democrats will bother to read it. But in fairness, don’t forget doctrinaire Republicans who have thus far ignored exploring allegations posted on CleanUp ATF (the website from which Operation Fast and Furious “gunwalking” information was first shared) that Chipman’s manipulation of the “best qualified” contractors list amounted to “fraud.”

Proving the man is unfit and untrustworthy for power, however, is a lot easier than that. The fact that he deleted “tweets” from a Twitter account he made private while the people he would exercise authority over, and their representatives, were assessing his suitability for the job. It is the act of someone with something to hide, and it’s a good indicator of how he would have ATF conduct business under his administration.

It’s cowardly and deceptive. And “disappearing” history is a time-tested totalitarian tactic.

No wonder the gun grab groups, which universally rely on those traits to swindle their countrymen out of their birthrights, are all crazy about the guy.

“Anyone know if the Wayback Machine captures tweets?” a comment poster on my The War on Guns blog asked. “Or if not, is there an equivalent that does?”

That had not occurred to me before. I’d assumed that was not the kind of stuff the web crawler was set to pick up on, and that deletions from social media sites stayed deleted.

I assumed wrong, at least partially. While 2021 posts appear “protected,” we can still access some of the stuff Chipman posted in 2015 and 2016. I’m going to highlight a few and encourage readers to explore and find things for themselves.

For instance, this one from May 2015 indicates a desire for a real expansion of federal powers and appetite for total control:

What he chooses to retweet is also instructive. Here, he thinks ridiculing Alabama Republicans is appropriate for someone who now wants to head a supposedly non-partisan agency:

“Is it just me or does every Alabama Donald Trump supporter look eerily similar?”

This comes on the heels of:

Then there’s a retweet from October 2016 I find interesting for two reasons, the first being he is spreading this sentiment:

The other reason I find that telling is the original tweet came from Dan Gross, a career gun-grabber that some who presume to lead us are partnering with.

Imagine what we’d find if Chipman hadn’t decided to cover his tracks and run from his past because he knows if he didn’t even some Democrats would have to distance themselves from him.

Leading ATF is not the only thing this character is unfit for. The NSSF commercial follows: 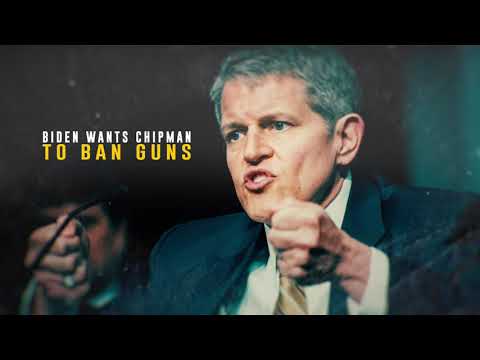