Joe Pee Pads Biden and Kamala Knee Pads Harris would like nothing more than to be able to kick down your door and demand you surrender your guns.

Biden said, “The idea you need a weapon that can have the ability to fire 20, 30, 40, 50, 120 shots from that weapon, whether it’s a 9mm pistol or whether it’s a rifle, is ridiculous. I’m continuing to push to eliminate the sale of those things.”

And there it is… The 9mm. Just like that, the 9mm, one of the most popular handguns in America, is sitting right there on the table. 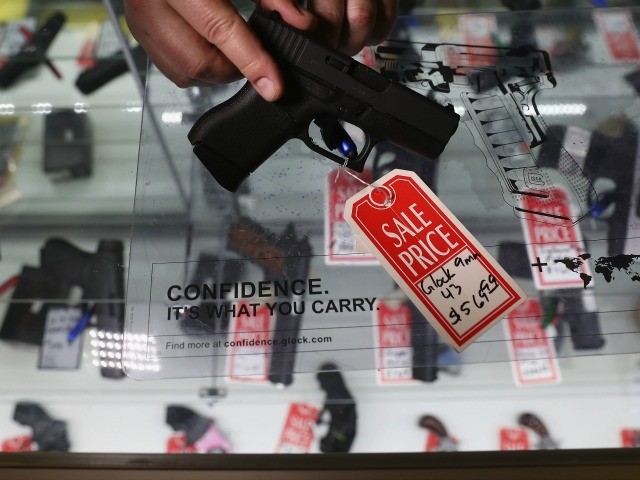 Also on the table now is “20 shots.” Many 9mms carry a standard 16 round magazine, and with one more chambered, you got 17. So now, we’re only three measly shots away from a standard, everyday 9mm being labeled a “weapon of war.”

This kind of mission creep is par for the course for the extreme left.

Yep, one day, they just want to allow same-sex couples to get married. The next day, drag queens read to prepubescent kids at the local library, and naked men walk around your daughter’s locker room.

One day, it’s “two weeks to slow the spread,” and here we sit, more than a year later, right back talking about mask mandates and shutdowns.

One day, it’s DACA. The next day, the borders are wide open.

Biden targeting the 9mm is no accident, no slip of the tongue, and no senior moment. As the government seeks to impose its rule over our everyday lives, seeks to exploit things like the coronavirus to strip us of our everyday liberties, disarming us is a necessary component of that. 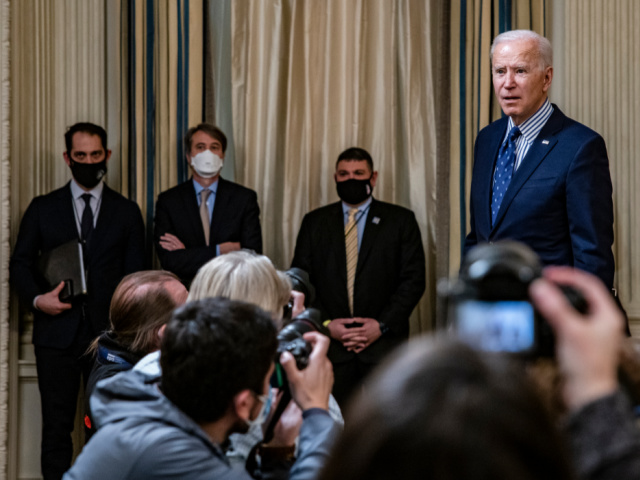 President Joe Biden stops to answer questions from reporters after speaking in the State Dining Room with Vice President Kamala Harris behind him following the passage of the American Rescue Plan in the U.S. Senate at the White House on March 6, 2021 in Washington, DC. The Senate passed the latest COVID-19 relief bill by 50 to 49 on a party-line vote, after an all-night session (Photo by Samuel Corum/Getty Images).

It’s all a lie, and the media know it’s a lie, most especially the fact checkers, and their goal is to lie, to deceive us, to allow the same-sex marriage camel nose into the tent so that the full camel of drag queens can read to our children.

Someone on the right will warn that Biden is coming after your guns, and the fake fact checkers will mobilize with their tut-tut-tuts declaring those statements a lie because, you know, Biden didn’t really say that. But these godforsaken liars tut-tut-tut even when Biden does say it.

After both Biden and Her Vice Fraudulency Kamala Harris flat-out admitted they support a “mandatory” gun buyback program — which is straight-up confiscation — the fact checkers still lied, still said, Tut-tut-tut, Trumptards, Biden is not going to confiscate your guns.

Look at this fake fact check from the far-left FactCheck.org. A 2020 Trump ad claimed Biden was coming for our guns, and FactCheck.org freaked out to protect Biden:

“Joe Biden openly admitted his plan to violate our Second Amendment rights,” the ad’s narrator says about the Democratic presidential nominee. The ad then shows CNN’s Anderson Cooper saying to Biden: “To gun owners out there who say, well, a Biden administration means they’re going to come for my guns.” After that, Biden is shown saying, “Bingo. You’re right.”

But his full response was: “Bingo. You’re right, if you have an assault weapon. The fact of the matter is they should be illegal, period.”

Biden actually argued that banning Americans from purchasing assault weapons wouldn’t be a violation of their constitutional rights, and he said he wouldn’t confiscate firearms that had already been purchased legally.

See! See! See! shouts FactCheck, It’s a lie! Biden’s not coming for your guns. He’s just coming for those nasty assault rifles everyone hates. It’s Trump who’s a liar. Why would you vote to reelect a liar?!

And here we sit… Now that Biden’s allegedly won the 2020 election, he just did exactly what the Trump ad said he would. In this country, if you put 9mms on the banning table, if you come for our 9mms, you are most definitely coming for our guns.

So go ahead and add “Biden’s not coming for your guns” to this list….