I even heard of a funeral home offering a drive through.

What started as a novel idea in Southern California, the drive-thru window grew into a societal staple across the country.

Drive-thru history in America dates back more than 70 years. During that time, the concept has evolved drastically from a simple intercom system to mobile ordering and even the use of artificial intelligence.

But what is now ubiquitous at fast food restaurants as well as a host of other business, wasn’t always a common sight. So how did we get here? Let’s explore the history of the drive-thru window.

Precursors to the Drive-Thru

During the roaring ’20s, car ownership exploded. Everyday consumers were making more money in these pre-recession years and were able to afford vehicles. In turn, businesses such as drive-in movie theaters and restaurants became more popular.

Drive-in eateries date back to 1921 when a Texas chain of restaurants called the Pig Stand began incorporating the practice. At drive-ins, customers would park their car and immediately be met by carhops who would take orders and deliver them to the kitchen. When the food was ready, the carhop would bring it back to the car for the customer to enjoy in their vehicle.

This model improved the speed and efficiency of service. Restaurants continually tried to enhance the concept by increasing the speed at which the food could get to the customers. Hence the roller-skating carhops that became a popular trend across the country. 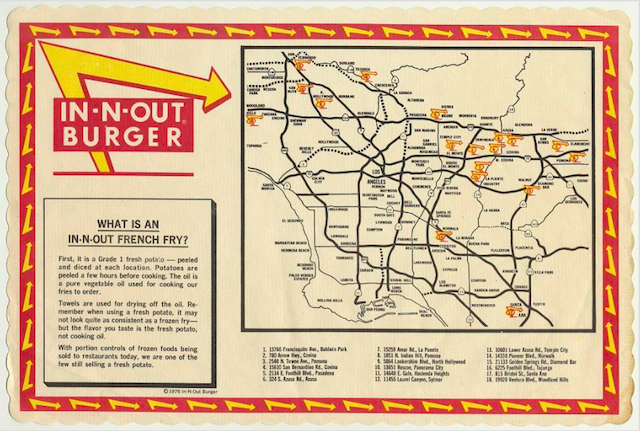 At the first In-N-Out Burger drive-thru, which opened in California in 1948, customers received sheets of butcher paper to protect their laps while eating in their cars. Soon, printed “lap mats” were a regular feature of the chain. (National Museum of American History)

The drive-thru was created in the 1940s. There are several claimants for the first such eatery, including Red’s Giant Hamburg on Route 66 in Springfield, Mo., which reportedly began the practice in 1947.

But the drive-thru as we know it today, complete with an intercom ordering system, started in 1948 at In-N-Out Burger in Baldwin Park, Calif.

The first In-N-Out location was barely 100 square feet – only enough room for the cooks. Owner Harry Snyder envisioned a concept that would enable customers to order and receive their meals without leaving their car. Working in his garage during late nights, Snyder created a two-way speaker box that allowed customers to do just that.

The drive-thru model proved to be very successful. By 1958, In-N-Out had five locations in the Los Angeles area. Smaller chains like Jack-in-the-Box and Wendy’s adopted the model.

It wasn’t until the 1970s that drive-thru eating became mainstream. This is when major fast food restaurants began adding a drive-thru option. The most notable was McDonald’s, which opened its first drive-thru in 1975. 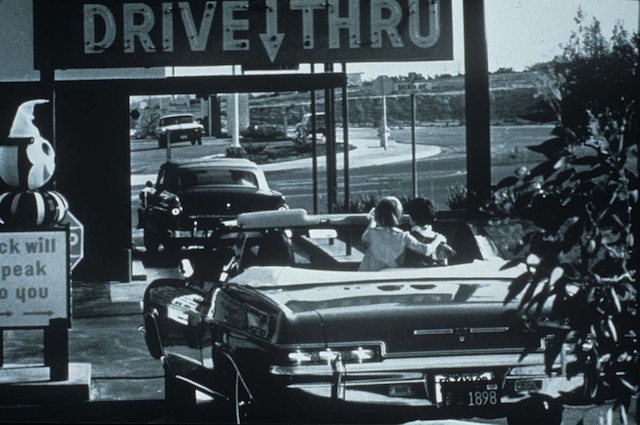 A giant clown and signage directed customers to the two-way speaker where they placed their orders at a Jack in the Box in Southern California. (National Museum of American History)

But another important cultural event was occurring during this time that helped boost the popularity of the drive-thru window, one that had nothing to do with cars or food. During the 1970s, there was a significant increase in the number of women working outside the home. With both parents working, fast, inexpensive and convenient meal options became more of the norm.

As the drive-thru experience grew in popularity, both the food and auto manufacturing industries adapted to the times. Restaurants began selling foods that could easily be eaten in a car. (This is supposedly what spurred the creation of the Chicken McNugget). Car makers, meanwhile, added features such as flat-folding glove box doors and the now-ubiquitous cup holder, which wasn’t standard in vehicles until the 1980s.

Even with its long history and stable footing as a business model in the U.S., the drive-thru faces its fair share of threats. Most notable is the rise of third-party delivery services such as DoorDash and Uber Eats. The online food delivery industry brought in more than $10 billion in 2019, which would make it the fifth-largest restaurant chain in country.

Still, drive-thru windows now account for about 70% of the billions of dollars fast food restaurants bring in each year. And according to CNBC, nearly 40% of consumers reported using the drive-thru more often in 2019 than the previous year.

So while times change, don’t expect the drive thru to be going away anytime soon.