I figured Rod Serling’s grave marker would be more elaborate.

The final resting place for the famed creator and narrator of “The Twilight Zone.” 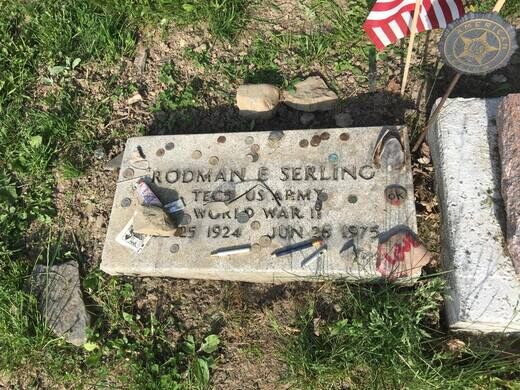 IN INTERLAKEN, NEW YORK’S Lakeview Cemetery you can find the surprisingly ordinary gravesite of Rod Serling, famed creator and narrator of the anthology television series The Twilight Zone, which ran for five seasons from 1959 to 1964.

Serling joined the U.S. Army after graduating high school and served in the Pacific Theater during World War II. He eventually earned the Purple Heart, the Bronze Star, and the Philippine Liberation Medal. After being discharged from the Army in 1946 Serling enrolled in college, where he developed interests in theater, writing, and broadcasting.

Serling worked in radio and television for a number of years before finding success. In 1955, a program based on one of his scripts aired on Kraft Television Theatre that earned critical acclaim. At the time, a critic for the New York Times called it “one of the high points in the TV medium’s evolution.” With the praise came a number of job offers, and eventually the creation of the series that would make Serling a household name.

The Twilight Zone premiered on CBS on October 2, 1959. In addition to presenting each episode, Serling was the creator and head writer. Each episode presented a stand-alone story in which characters found themselves in the middle of disturbing or unusual events ranging from encounters with the supernatural to science-fiction dystopias. Many had twist endings and moral lessons about the human condition. Of the many scripts Serling wrote for The Twilight Zone, his favorite was adapted from a short story about a bibliophile bank teller called “Time Enough At Last.”

Although busy making an iconic show allowing us to enter the fifth dimension, Rod also taught college courses on film criticism, writing, and drama in the late 1960s until his untimely death in 1975 at 50 years old. He died after a series of heart attacks likely caused by his smoking of multiple packs of cigarettes a day. His wife, Carolyn Louise “Carol” Kramer Serling died on January 9, 2020, at the age of 90. She was buried next to her husband.

Know Before You Go

One thought on “Rod Serling’s Grave ”