I have wondered why airplane windows were round.

We’re used to seeing square and rectangular windows in most building structures. And there are of course rounded windows — or oculi in architectural parlance — that lend character and intrigue to design.

Now, think about airplanes and jetliners. Always round windows. How strange would it be to walk down the aisle of a jetliner and buckle up next to a square window?

Your ancestors may have done just that once upon a time as square windows were in fact the norm in early commercial airplane manufacturing. They worked just fine for centuries in homes and buildings, so why change a perfectly good design?

Unfortunately, it took a few tragic events for engineers to take a fresh look at airplane window design. It was in the 1950s when commercial airliners were getting bigger — and they also started disintegrating in midair. Two of those were de Havilland Comets, which fell apart in flight in separate events in 1953 and 1954. The cause was found to be … yup, the square windows.

By the ’50s, aircraft like the de Havilland Comets were flying faster and higher than industry predecessors, meaning after multiple flights and repeated pressurization, those square windows basically broke apart from the pressure. 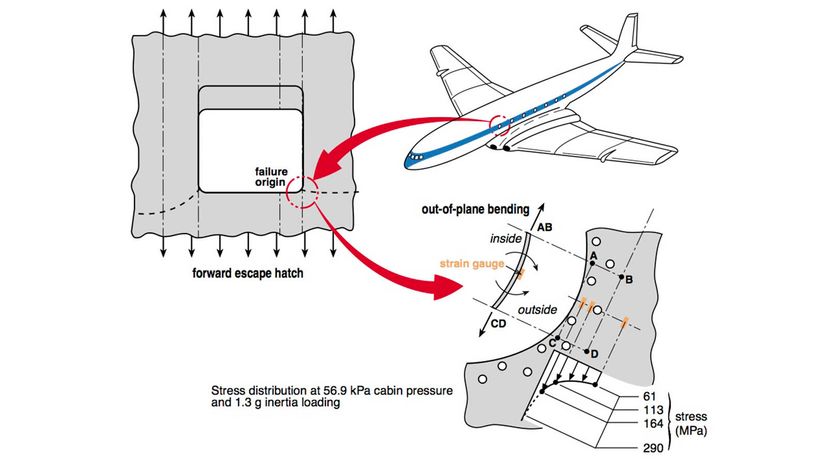 This graphic shows how the stress from the square windows on the de Havilland Comet caused the aircraft to break apart in midair.
WIKIMEDIA/(CC BY-SA 2.0)

Rounded windows, on the other hand, are able to distribute the pressure evenly because they have no corners for stress to concentrate, reducing the likelihood of cracks or breaks. Circular shapes are also stronger and resist deformation, making them more able to withstand the repeated pressure differences between the inside and outside of the aircraft.

You might also notice that there are multiple layers of acrylic (not glass) between you and the outside of the aircraft. Those layers offer additional protection from weather events like rain, wind and fog. And that tiny little hole at the bottom? They’re called “bleed holes” and they add another layer of protection, helping keep the air pressure onboard at a relatively constant level by allowing the air to pass through the various window layers.

So, next time you’re on a flight, be thankful for those rounded windows, whether you’re enjoying the view or avoiding it because you don’t want to be reminded just how high off the ground you are.

The de Havilland Comet was the first commercial airliner powered by jet engines. Its debut flight was May 2, 1952. Its last flight was in September 1981.