As the late Paul Harvey used to say “Now You Know The Rest Of The Story.” 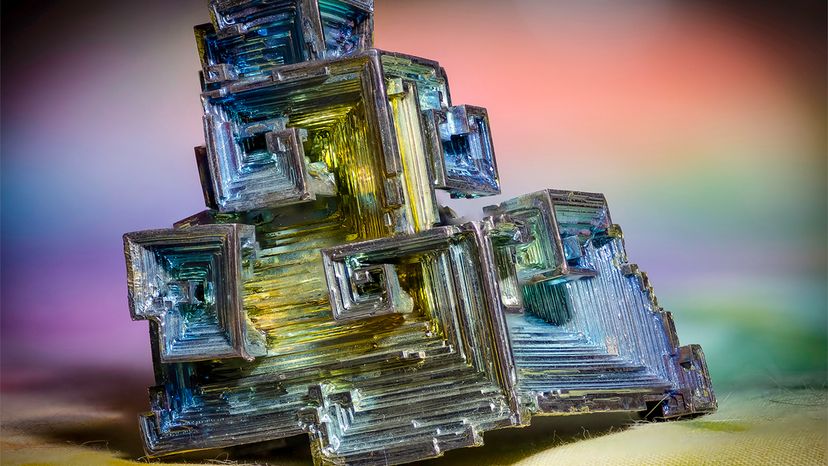 An iridescent, rainbow-colored bismuth crystal, which shows the stair-step formation that is created as it cools from liquid to solid. KURT BAUSCHARDT/FLICKR (CC BY-SA 2.0)

What do your tummy ache cure, your eyeshadow and your home sprinkler system have in common? All three involve an iridescent metal called bismuth.

You might have seen them for sale in the science museum gift shop: bismuth crystals — often shaped like tiny pyramids forged in some extraterrestrial laboratory. But the fact that bismuth metal forms shiny, rainbow-colored, stair-step crystals as it cools is only one of its best tricks; bismuth is less dense as a solid than it is as a liquid, unlike many metals, it’s a very poor conductor of heat and electricity, and unlike most heavy metals, it’s nontoxic.

Number 83 on the periodic table of elements, bismuth is a brittle, silvery metal that can be found by itself in the ground or mixed in a compound, or ore, of other metals including tin, copper, lead, silver and gold. In fact, we don’t mine much bismuth for bismuth’s sake — mostly because we’re always having it dropped in our laps as a byproduct of mining these more valuable metals. It’s about twice as common in the Earth’s crust as gold.

Although bismuth was probably used in ancient meso-America and Egypt, bismuth was discovered in Europe around the year 1400 B.C. E. by an unknown alchemist — possibly one trying, as alchemists often did, to turn lead into gold. But ancient western alchemists did a lot for our understanding of chemistry, and though nobody knew exactly what this pale, heavy, opalescent metal with a low melting point was, they quickly started using it to decorate things. But it took a couple of hundred years for anybody to definitively tell the difference between bismuth and lead: It was identified as separate in 1753 by a French chemist named Claude-François Geoffroy.

How Do We Use Bismuth?

Bismuth is plentiful, so we find stuff to do with it. One handy thing is it’s nontoxic and is not a known carcinogen, so we can throw it in things like paints and makeup. For instance, because bismuth turns yellow when oxidized, bismuth oxide is used as a yellow pigment for cosmetics and paints. Bismuth (III) chloride oxide is used to give cosmetics a pearly effect.

Because bismuth has a low melting point, it’s commonly used in sprinkler systems: When the heat rising in a burning building warms the bismuth plug in the sprinkler to its melting point (520.52 degrees Fahrenheit or 271.40 degrees Celsius), the metal melts and unleashes the water onto the flames. Although sprinkler systems account for about a third of bismuth’s industrial application, it’s also now used in plumbing, shotgun pellets, fishing tackle, soldering and other things that used to be made of toxic lead.

Maybe the most bizarre application for bismuth is its use in the popular over-the-counter stomach medicine, Pepto-Bismol. That’s right, the minty-tasting pink stuff that treats your heartburn contains over a quarter of a gram per dose. Pepto-Bismol has been manufactured for 80 years, and as far as antacids go, it’s extremely unique because one of the primary active ingredients is bismuth subsalicylate (BSS).

Most antacids rely on a base like baking soda, magnesium or aluminum hydroxide or calcium carbonate to neutralize stomach acids. They all work a little differently, but essentially the base hits the stomach and immediately starts counteracting the pain-causing acids, converting them partially into a gas which you then burp up. Some antacids only contain a base — Tums, for instance, just contains calcium carbonate — while others, like Alka-Seltzer, contain a base and a pain reliever like aspirin. Pepto-Bismol contains the base calcium carbonate, but the pain reliever is BSS. Which, again, was a unique choice — there are probably only a couple other medications on the market that contain it.

Bismuth salts have been used since around the 1700s as a pain reliever, and though aspirin has long been vastly more popular, the lasting power of Pepto-Bismol shows that it works. Because BSS is chemically kind of similar to aspirin and both are broken down in the body to the same compound, salicylic acid, which has both anti-inflammatory and pain relieving properties. But BSS has some other effects that aren’t well understood, but which seem to help the gastrointestinal tract, so it can be used to treat diarrhea as well as indigestion.

Pepto-Bismol contains a pretty high concentration of bismuth — so much that if you have a few hours on your hands, you can actually extract the metal from Pepto-Bismol pills. And if you have even more time on your hands — like a couple of days — you can use it to grow metal bismuth crystals in your home. It’s a fiddly process and requires some basic chemistry lab equipment, but it just goes to show: Even if something looks like it was grown by aliens in a futuristic moon cave, it might just come from somebody’s kitchen lab.

Pepto-Bismol and other salicylates like aspirin, are extremely toxic to cats.