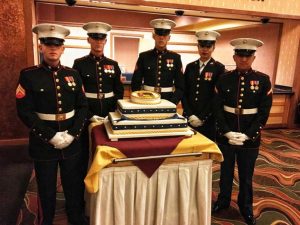 Prior to 1921, Marines celebrated the recreation of the Corps on 11 July with little pomp or pageantry. On 21 October 1921, MajorEdwin North McClellan, in charge of the Corps’s fledglinghistorical section, sent a memorandum to CommandantJohn A. Lejeune, suggesting the Marines’ original birthday of 10 November be declared a Marine Corps holiday to be celebrated throughout the Corps. Lejeune so ordered in Marine Corps Order 47:

Sketch of the original Tun Tavern

On November 11th, we pause to reflect on the history of this great Nation and honor all those who fought to defend it. Originally titled “Armistice Day” and intended to celebrate the end of World War I, “the war to end all wars,” Veterans Day allows us to give…