What’s more American than a hamburger?” asks Steve Mallie, owner of Mallie’s Sports Grill & Bar in Southgate, Michigan, and seller of the world’s largest commercially available hamburger — and cheeseburger. Well, in honor of National Cheeseburger Day, celebrated on September 18 every year, we would like to amend that question to ask: “What’s more American than a cheeseburger?” Read on to learn six cheesy facts about this all-American creation.

1. The Cheeseburger Was Invented by Lionel Sternberger

Did you know that just outside of the city of Los Angeles in Pasadena, California, lies the birthplace of the cheeseburger? The “earliest recorded instance of a cheeseburger being served to a customer was in 1924 at the Rite Spot in Pasadena,” says Paul Little, president and CEO of the Pasadena Chamber of Commerce, in an email.

“Legend has it that young Lionel Sternberger was working at his father’s roadside stand when he burned one side of a burger,” says Little. The stories about Sternberger offer two reasons as to why he might have topped the burger with cheese. “Rather than throw it away, he covered the error with cheese and served it to a delighted customer. Or, a hobo came by the stand and wanted as much as he could get for his 15¢ and asked for everything possible on it, including cheese.” 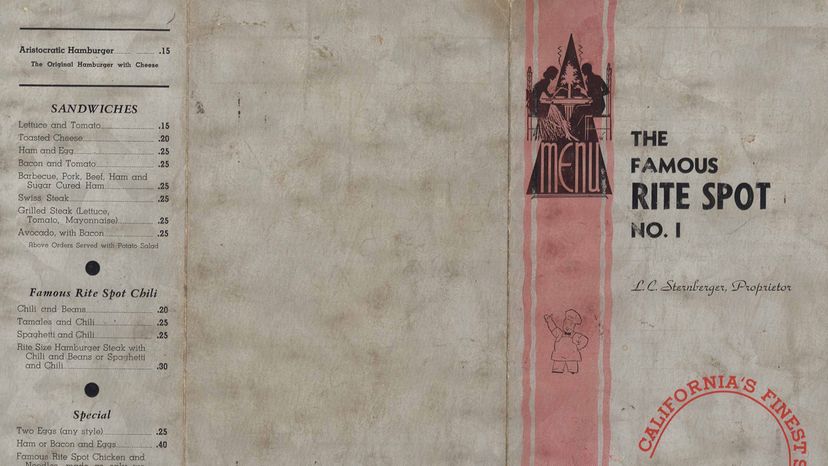 The original 1920s menu from the Rite-Spot at 1500 West Colorado Boulevard in Pasadena, California, featuring the 15 cent Aristocratic Hamburger, described as “The Original Hamburger with Cheese.”
PASADENA MUSEUM OF HISTORY

Whatever the real story might be, that little burger with cheese became a regular fixture on the menu. It was called the “Aristocratic Hamburger: The Original Hamburger with Cheese.” “Sternberger was supposed to have a pretty sharp sense of humor, which could explain the Aristocratic Burger title,” says Little. It seems to be a happy coincidence that Lionel Sternberger was responsible for the first cheeseburger.

Granted, there are those who challenge Pasadena’s cheeseburger title, like 80/20 @ Kaelin’s (previously known as Kaelin’s Restaurant) in Louisville, Kentucky, which believes it created the first commercially sold cheeseburger, likely in 1934. But, for the most part, Pasadena proudly wears the cheeseburger crown.

The city of Pasadena commemorated this cheesy bit of history by laying a plaque at the original Rite Spot location in Pasadena. Rite Spot closed down many years ago, but the plaque is still there for all curious visitors to see. The city also hosts an annual Cheeseburger Week in January.

In 2017, Mallie’s Sports Grill & Bar cooked a behemoth burger that weighed nearly 1,800 pounds (816 kilograms), giving it the title of the world’s biggest commercial cheeseburger. Owner Steve Mallie shares the story of how this colossal cheeseburger came to be.

“Well, I opened my restaurant back in 2005. When we opened, we wanted to do something a little over-the-top and different. We opened up with a 10 pound [4.5 kilogram] hamburger. They were so popular, we were selling them every single day of the week,” he says. But Mallie noticed that the world’s largest cheeseburger according to the Guinness World Records was in Japan, which didn’t sit right with Mallie, given that the burger is an American icon. So he and his team created a 236 pound (107 kilogram) burger in 2006, which broke the world record at the time.

They kept making their record-winning burger bigger each year until they eventually had to create a convection oven out of a shipping container to accommodate their world-record-setting burger, which weighed a whopping 1,796 pounds (815 kilogrms). And since it contained all the standard toppings of a burger, including American cheese, Mallie’s burger also counts in our book as the world’s biggest commercially sold cheeseburger. The burger was 30 inches (76 centimeters) tall and about 6 feet (1.8 meters) wide; it took 16 hours to cook.

And yes, you really can buy this monstrous cheeseburger, which is available on Mallie’s menu.

As of now, no one has yet purchased the hefty cheeseburger, which is understandable, considering that it costs $10,000. But if you are interested in being the first, be sure to give them advance notice — and pay up in advance as well. “We don’t start to process until we’re fully paid. We’re not going to have no dine and dashers on a $10,000 burger,” says Mallie. The restaurant needs around a minimum of three days to process this major order, given that they need a few days to ship in the 2,000 pounds (907 kilogrms) of hamburger meat required, a day to prepare the bun and a day to cook the burger.

3. The World’s Tiniest Cheeseburger Is Made in Japan

Okay, so this “fact” doesn’t exactly come with a stamp of approval from the Guinness World Records. But it is a totally edible delight to behold. The Japanese YouTube channel Miniature Space has made everything from teeny-weeny potato chips to miniscule ramen. And, most relevant for us, the cheeseburger:

It’s unclear who actually consumes these less-than-bite-sized meals, but if you think your pet mouse might fancy a cheeseburger, check out their video. It’s also just sheer fun to watch them chop onions fit for gnomes or grill burger patties the size of your thumb on a griddle. And, of course, they top off the burger with tiny squares of cheese — perhaps sliced mozzarella?

If you want to try your hand at cooking these “snacks,” you can even purchase tiny kitchenettes that seem straight of a dollhouse so you can recreate their miniature products. It’s pretty much tailor-made for cooking in the age of Instagram.

American or cheddar, which cheese is the best burger topping? This question has been hotly debated among cheeseburger fans for decades.

But what if you’re a fancy cheese connoisseur who likes to look beyond the usual toppings? Food & Wine recommends topping your burger with the likes of the meltable Monterey Jack, creamy Brie or smoked Gouda. For even more atypical cheese toppings, check out this list that the website Thrillist compiled, which includes burrata or “shreds of cream-soaked mozzarella;” pimento, “the Southern cheese spread with a kick;” and smoked blue cheese with bacon onion jam.

5. Where and When the Cheese Goes On Is Crucial

The default position for most cheese slices is squarely on top of the burger patty. At least, this was a widely held position until people on the internet lost their minds in 2017 when Google’s cheeseburger emoji featured cheese being placed below the patty, spurring a brief but intense internet debate as to the cheese’s rightful place in the burger hierarchy.

For his part, Mallie thinks there’s no debate. “I’ve only done it on top of the patty. I don’t know where below the patty would come in. When you’re melting cheese on a burger, you want to melt it on top of a burger.”

What about putting the cheese inside the burger patty? Scandalous. The meal kit service Plated suggests that although any cheese can be stuffed into a burger, this style works best when using crumbly cheeses that don’t work as well as toppings, such as blue cheese and feta. And honestly, who couldn’t get on board with biting into a little pocket of cheesy heaven?

And it gets even more dicey — there is also a hot running debate about exactly when the cheese should be placed on the burger during the grilling process. Now, the standard grilling process for a cheeseburger usually entails plopping a slice of cheese on the patty about two minutes before removing the burger from the grill.

But writer Chris Thompson sent the internet into a tailspin in 2017 when he wrote that this was a “dumb” move, because the cheese does not require much extra heat to melt. By putting the cheese on the burger while it’s still cooking, Thompson argued, the cheese wound up being too thinly spread out on top of the patty, resulting in a cheesy mess on the sides of the burger.

The alternative to all this chaos? Thompson proposed a sort of reverse assembly, which involves putting cheese on the underside of the top bun and then immediately placing the grilled patty on top of the cheese. The lettuce, tomatoes and condiments are applied to the bottom burger bun. Then, slap the top bun onto the bottom bun. Presto! A perfect burger.

So what cheeseburger goodness is out there for the vegans and vegetarians of the world?

Well, if you can’t eat it, you can at least hum along. Jimmy Buffett wrote the song “Cheeseburger in Paradise” about finding a restaurant serving up cheeseburgers on the island of Tortola after a particularly rough boat trip. It appeared on his album “Son of a Son of a Sailor,” winning pop music acclaim for the all-American slab of meat topped with cheese. Released as a single, the song reached No. 32 on the Billboard Hot 100 in June 1978.

With the rise of plant-based burgers like the Impossible Burger, could we soon see a future without dairy-based cheese on our burgers? Technomic’s 2019 Burger Consumer Trend Report notes that 10 percent of 18-34-year-olds would consider ordering dairy-free cheese on their burger. But despite the environmentally-friendly appeal of these burgers, Technomic reports that consumers still overwhelmingly prefer cheese and meat over plant-based and dairy-free alternatives.