I do not understand how President Trump is responsible for what this man did.

The media rushed to blame President Donald Trump on Monday for the death of an Arizona man who ingested a form of chloroquine — before it turned out that the man had ingested a fish tank cleaner with a similar chemical.

An Arizona man has died and his wife is in critical condition after they ingested chloroquine phosphate – an aquarium cleaning product similar to drugs that have been named by President Trump as potential treatments for coronavirus infection.

The couple, in their 60s, experienced immediate distress after swallowing the drug, an additive used at aquariums to clean fish tanks, according to Banner Health Hospital in Phoenix.

Chloroquine phosphate shares the same active ingredient as malaria drugs that President Trump has touted as possibly effective against COVID-19, the potentially life-threatening disease caused by the coronavirus.

Many media outlets, however, reported that the man died after taking “chloroquine.”

Axios, for example, had to delete a tweet and issue a correction after reporting, initially: “Man dies after self-medicating with chloroquine.”

We have deleted this tweet and corrected our story because it did not reflect the full nature of the self-medication done with an additive commonly used to clean fish tanks. https://www.axios.com/chloroquine-coronavirus-death-09c91a91-4fe7-472c-9de9-79b890aa8fff.html … 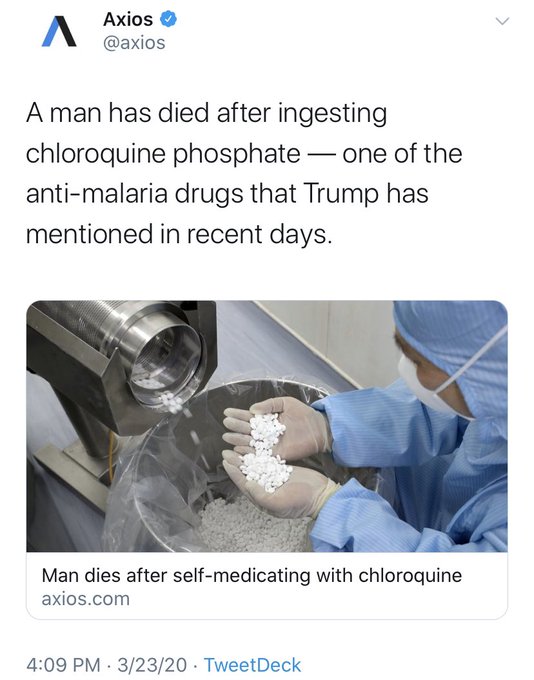 8,187 people are talking about this

The website added an “editor’s note” to the story: “Editor’s note: This story has been updated to reflect the fact that the form of chloroquine the couple ingested was used in aquariums — and it was not a medication.”

BuzzFeed reported: “A Man Died After Self-Medicating With A Drug Trump Promoted As A Potential Treatment For The Coronavirus.”

The text described “a drug meant for aquariums” without distinguishing between a product sold for fish tanks and a product for humans prepared by a pharmacist and supplied with a medical prescription.

President Trump has spoken specifically about the medically-supervised use of chloroquine — specifically, a drug called hydroxychloroquine, often used in combination with azithromycin, which has shown anecdotal efficacy in treating coronavirus victims, though it has not yet been proven to do so in clinical trials.

On Monday, he praised New York Governor Andrew Cuomo for launching clinical trials of the experimental medication regimen. Trump spoke specifically about “the hydroxychloroquine and the Z-Pak,” the latter another name for azithromycin.

Last week, NBC News’ Peter Alexander accused Trump of giving Americans “false hope” by touting the potential of the drug. The false claims about Trump encouraging a man to ingest fish tank cleaner are in the same vein.